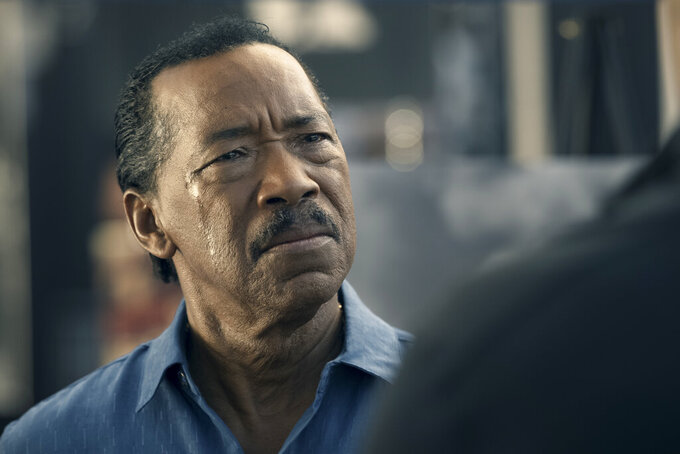 In this image released by CBS, Obba Babatundé portrays Daniel Harrelson in a scene from "S.W.A.T." In the episode titled, "3 Seventeen Year Olds," airing in the first hour of a two-hour season premiere episode on Nov. 11, Daniel Sr., played by Babatund, his son Hondo, portrayed by Shemar Moore, and his teen charge, Darryl, played by Deshae Frost, confront the history of racial tension in Los Angeles through flashbacks to the city in 1992 following the Rodney King verdict. (CBS via AP)

LOS ANGELES (AP) — The ghost of a bitter chapter for Los Angeles haunts the season debut of “S.W.A.T.,” which casts today’s police-connected African American deaths as part of a cruelly repetitive history.

“We’ve been successful for three years playing super-cops and entertaining folks,” Moore said. “For ‘S.W.A.T.’ to take on what’s been happening around this country, in the world, is very brave and very bold.”

Thomas said it's a step toward fulfilling the vision for the series he co-created with Shawn Ryan (“The Shield”). It's a reboot of the 1975-76 series with Steve Forrest as Daniel “Hondo” Harrelson, head of a mostly white SWAT unit. This time around, Hondo is an LA-born African American striving to uphold the law and connect his multiethnic team with the community it serves.

“We attempted from the very first episode to try to say that we’re going to be a show that entertains but also engages our audience. Well, 2020 allowed us to double down on that,” Thomas said.

The episode is one answer to whether network TV dramas, ever reliant on law enforcement officers as unalloyed heroes, can reflect opposing views as the deaths of George Floyd, Breonna Taylor and others drive demands for systemic change in police practices.

The “S.W.A.T.” story line is directly linked to Floyd’s death last May while in the custody of Minneapolis police, Thomas said.

Three months earlier, Thomas had been working on an episode intended to mark the anniversary of the April 1992 acquittal of LAPD officers in the beating of Black motorist Rodney King. The jury verdict triggered days of protest and destruction in Los Angeles, a deadly parallel to the 1965 Watts-area violence that also followed a law enforcement stop of a Black driver.

Efforts to make that episode for last season were derailed by the coronavirus outbreak that halted TV and movie production last March. And then came the outraged reaction to a video showing Floyd pressed under an officer’s knee for nearly 8 minutes before his death.

“The tenor of the episode went from a kind of humble appreciation to now, all of a sudden, there’s kind of a realization that perhaps we haven’t made the progress that we hoped that we had before,” Thomas said.

In the revamped story, Hondo and his dad, Daniel Sr., (Obba Babatundé) are shown in flashbacks that recall their experience. Later, the two clash over whether there's been progress — even with well-intentioned African Americans like Hondo on the force.

“Ain't no easy solution when Black people are being treated like they're disposable,” the older man says bitterly, his tears flowing. The episode is framed by scenes of a protest march and concludes with a powerful recitation of Floyd's last words.

Straight-ahead heroics aren’t slighted, as Hondo's team tracks members of a drug cartel and try to deter a terrorist attack — all in under an hour, and with fleeting acknowledgment of the pandemic. (The virus outbreak is prominent in the paired 10 p.m. episode, with the central story involving SWAT-CIA efforts to track an international crime boss.)

Moore and Thomas said the episode had the strong support of CBS and co-producer Sony Pictures Television, but it’s also the result of having a Black star and executive producer with the motivation and authority to initiate it. Moore also is a producer for “S.W.A.T.”

“What the show looks to do, and I’ve always looked to do as an individual, is to try to increase the types of voices that we see," Thomas said. “Not so much to eliminate the status quo that we’ve had before, but to expand the choices that a viewer has, so that you have different types of cop shows.... not just the standard that we’ve grown accustomed to.”

It remains to be seen how viewers react to a traditional broadcast drama addressing topical issues more common to cable and streaming fare.

Moore said that giving “S.W.A.T.” fans the thrill ride they expect is the priority but doesn't preclude offering more, and doing it in a way that respects varied perspectives.

“I don't care who you are when you watch that show, you are moved. And to be able to entertain folks but also move them and create a conversation, a debate” is the goal, the actor said. "We don’t care what side you take, but just let us present all sides, because that’s what we need, we need more communication.”

Lynn Elber can be reached at lelber@ap.org and is on Twitter at http://twitter.com/lynnelber.