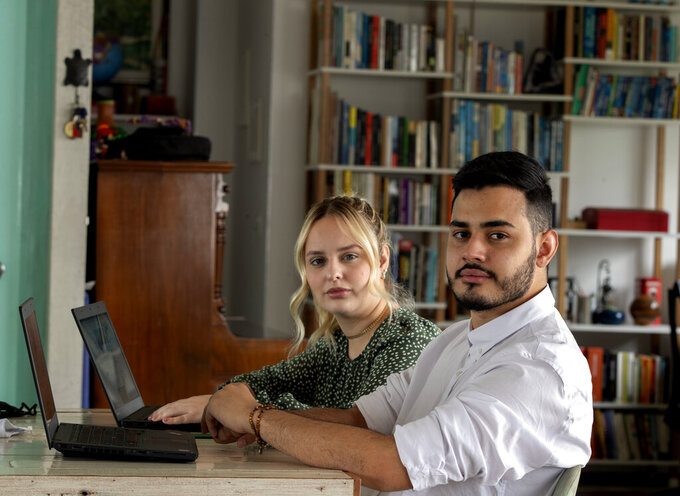 Leonardo de Carvalho Leal, right, and Mayara Stelle, who administer the Twitter account Sleeping Giants Brazil, use their computers in Sao Paulo, Brazil, Friday, Dec. 11, 2020. Sleeping Giants is a platform for activism whose stated mission is to attack the financing of hate speech and dissemination of fake news. (AP Photo/Andre Penner)

RIO DE JANEIRO (AP) — Before dawn on Dec. 1, Leonardo de Carvalho Leal prepared to leave his family behind in the Brazilian city of Ponta Grossa, in Parana state. His mother overwhelmed him with goodbyes and gifted him a bracelet she said had brought her luck. He fiddled with it on his wrist the entire ride to the airport, unsure when he might see her again.

“Maybe I was blaming myself a bit, for leaving so many people vulnerable,” he said in a video interview with The Associated Press, with tears welling as he recalled his departure. “But what I did was right.”

Leal and his girlfriend of six years, Mayara Stelle -- both 22-year-old law students -- this year created a Twitter account with its stated mission to call out Brazilian websites for spreading “hate speech and Fake News,” and torpedoing those sites’ advertising revenue. They garnered 410,000 followers, more than the number of residents in their mid-size city.

They also mustered a legion of enemies. Vitriol poured in, directed toward their account, Sleeping Giants Brazil. Believing their identities are soon to be revealed after a ruling against Twitter, they expect they will be personally targeted, for lawsuits or worse.

Fear their families would be caught in the barrage because they had often accessed the account at their parents’ homes, they say, is why they left their lives behind and are choosing to make their identities known to The Associated Press and Folha de S.Paulo, Brazil's biggest newspaper. The AP observed them accessing and using the Sleeping Giants Brazil account, and checked the names they provided against their government-issued identification cards.

“Those threats that say, ‘I’m going to kill you,’ or, ‘I’m offering 100,000 reais ($20,000) for the head of the profile’s owner,’ will now be directed at Mayara and Leo,” Stelle said from a city outside Sao Paulo. “This is a decision to protect our families and control exposure to show we’re common people, like anyone else who can have an idea. And that idea can be brilliant, can change things.”

This year, Brazil has been awash in misinformation about the pandemic, egged on by dubious claims from President Jair Bolsonaro. It marks the continuation of a digital battle in Latin America’s biggest country, with each side in the polarized nation seeking to portray itself as “owner of the truth,” as an expression in Portuguese goes.

Pursuit of Sleeping Giants Brazil is part of a growing trend over the last several years to instrumentalize the judiciary against those who train fire on conservative media outlets, interest groups and Bolsonaro’s administration, according to Taís Gasparian, a partner at law firm Rodrigues Barbosa, Mac Dowell de Figueiredo, Gasparian who has worked with media and free speech for decades. Often the alleged offenses may be covered by rights of free speech or press freedom. This year, that has included a writer, a cartoonist and a beach volleyball player.

Sleeping Giants Brazil followed the playbook of its US predecessor, which after Donald Trump’s 2016 presidential victory alerted companies to the fact their ads were appearing on websites including Breitbart News, a platform that critics have repeatedly accused of running racist, xenophobic and sexist content. Companies’ ads were often automatically placed through Google, and they decamped en masse upon learning of risk to their brands. Video that surfaced in mid-2019 showed Breitbart’s former executive chairman Steve Bannon saying Sleeping Giants had cost the organization 90% of its ad revenue.

The number of Sleeping Giants Brazil’s followers surpassed that of the US handle as it toppled one ad after another. A top target was Jornal da Cidade Online, a conservative website based in southern Brazil. The site’s content has repeatedly been debunked by fact-checking organizations, and a preliminary technical report shows “it is one of the big disseminators of false news in our country,” said lawmaker Lídice da Mata, the rapporteur of Congress’ ongoing investigation into misinformation, in a written response to AP questions.

Scores of advertisers in Brazil -- among them Dell, McDonald’s, Facebook and Domino’s Pizza -- have responded publicly to alerts from Sleeping Giants Brazil and likeminded Twitter users about their ads appearing on Jornal da Cidade, saying that they would remove them because of the site’s content or already had. State-run Bank of Brazil did the same, prompting a swift rebuke from Bolsonaro’s son and his communications secretary, who said on Twitter that independent journalism is important.

Jornal da Cidade claimed reputational and financial damages and sued Twitter, demanding the platform turn over data associated with the Sleeping Giants Brazil account that could identify its users. Twitter last week provided the court with the account’s I.P. addresses, according to a person with knowledge of the case, who isn’t authorized to speak publicly. Twitter said in an emailed statement that it “vigorously fought this case through several different appeals” and will continue to defend free speech and privacy rights.

Jornal da Cidade’s editor José Tolentino declined an interview request, and referred the AP to the law office representing him. His lawyer Simone Custódio declined an interview request, didn’t answer questions sent by email about the case, instead saying they will await the right time to comment publicly in observance of their client’s best interests.

“The cowardly attacks against Jornal da Cidade Online hide people, businesses and entities that certainly act in their desired attempt to install left-wing radicalism in Brazil or other even more sordid interests,” read an editorial it published on Dec. 4. The site has repeatedly denied spreading misinformation.

Danilo Doneda, a lawyer who specializes in data protection, told the AP that Brazilians are guaranteed freedom of expression, but the constitution has the peculiarity of prohibiting anonymity. Doneda, a member of the government’s newly-formed data protection council, likens Sleeping Giants Brazil to the pen name of an author known to his or her publisher.

“Twitter can gather the elements, technically, to reach these people, so it’s a pseudonym, not anonymity,” said Doneda.

Others have faced legal repercussions using their names.

Writer J.P. Cuenca has been hit with more than 140 lawsuits in 21 Brazilian states since he composed a tweet in June, according to his lawyer, Fernando Hideo. The tweet, which appeared to call for violence against Bolsonaro and evangelical pastors, was a Brazilian spin on a historical quotation.

Federal police interrogated cartoonist Renato Aroeira in July after depicting Bolsonaro as transforming a red cross representing hospitals into a swastika; the president had recently called on his social media followers to enter hospitals and film whether they were in fact overburdened with COVID-19 patients. And beach volleyball player Carol Solberg shouted “Out, Bolsonaro!” during an on-court interview on Sept. 20 in Rio de Janeiro state; a sports court warned her she could face a fine of up to $20,000 and a 6-game suspension if she spoke out again.

Polarization has taken root since Brazil’s sprawling Car Wash investigation that kicked off in 2014 and exposed rampant corruption, followed by President Dilma Rousseff’s impeachment. The reason was violation of Brazil’s budget laws, but her Workers’ Party ascribed removal to political motives.

Into that political divide strode Bolsonaro, a fringe lawmaker claiming he would restore law and order to the beleaguered nation, put God and country above all else, loosen gun controls and banish left-wing politics.

His 2018 campaign was turbocharged by social media and messaging app WhatsApp. Media reported that executives had bankrolled blast messages on WhatsApp -- much of which contained content deemed false by fact-checkers -- and in doing so potentially broke campaign finance laws. It spurred Congress to launch its investigation into misinformation spread before the election.

One of the businessmen named in a story was Luciano Hang, a Bolsonaro booster and department store tycoon with a penchant for wearing bright green suits with yellow ties -- the colors of Brazil’s flag. He denied the assertions and sued the story author Patrícia Campos Mello, one of the nation’s more prominent journalists, and Folha de S.Paulo. A judge this month ruled in his favor and ordered payment of 100,000 reais. The paper and Campos Mello will appeal to a higher court, according to Gasparian, the lawyer representing them.

Throughout, Bolsonaro has denigrated mainstream media, often calling them “fake news.” In February, he repeated a debunked, sexually charged allegation about Campos Mello, who last year won the International Press Freedom Award after coverage of his campaign.

Sympathetic conservative websites have consistently cheered him on. One is Jornal da Cidade, which the Atlantic Council’s Digital Forensic Research Lab (DFRLab) characterized as a pro-Bolsonaro site. Its editorial stance is explicit in its suit against Twitter, saying editor Tolentino has sought “to highlight the current federal administration’s fight to govern the country, despite the groundless accusations it is suffering publicly.”

When Leal and Stelle successfully petitioned Dell to remove its ads from Jornal da Cidade, Tolentino published a text saying Sleeping Giants’ followers were “all frustrated, spiteful, criminal and envious leftists,” and that his site receives more than one million visits daily. It has 1.5 million followers on Facebook, where its posts about COVID-19 significantly outperformed those from traditional media outlets, particularly ones politicizing the health crisis, according to a DFRLab report in May.

Sleeping Giants Brazil targeted Jornal da Cidade early on, Stelle said, because of its coronavirus-related content. That has included touting chloroquine to fight COVID-19, an anti-malarial drug that Bolsonaro trumpeted despite a growing body of evidence that it is ineffective against the disease. In April, Congress extended its probe to investigate misinformation about the pandemic.

The site published a story with the headline: “A catastrophic analysis about the vaccines against the Chinese virus: ‘They interfere directly in genetic material.’” It was debunked by two separate fact-checking groups, Agencia Lupa and Comprova, but not before racking up 191,000 interactions on Facebook. Jornal da Cidade replaced the story with a correction, which has garnered less than 3% as many interactions.

And ahead of this year’s municipal elections, Jornal da Cidade hosted six of the ten most-shared links on Facebook that encouraged Brazilians to believe in ballot fraud and election manipulation, according to a study published Nov. 10 by the department of public policy analysis at the Getulio Vargas Foundation, a university.

Cristina Tardáguila, associate director of the International Fact-Checking Network and founder of Agencia Lupa, said Sleeping Giants Brazil was naive in not providing transparency and focusing efforts on one side of the political spectrum, which hurt credibility and handed ammunition to opponents.

“There was a certain naivete in thinking they’d be carried on the shoulders of the people, but Brazilians are ultra-polarized,” Tardáguila said. “Half the people wanted to do that, but half wanted to kill them, destroy them.”

She added she worried that the judiciary didn’t take into account the very real physical risk that the account’s administrators could face. The AP reviewed more than ten physical threats made publicly on Twitter. Jornal da Cidade hasn’t incited any violence against them.

Leal and Stelle aren’t sticking around to see if threats are mere bluster from keyboard warriors. They’re moving to their new home -- the location of which they declined to disclose – where they intend to keep working.

Jornal da Cidade is just one of the sites Sleeping Giants Brazil went after. Congresswoman Carla Zambelli, a close ally of Bolsonaro’s, in August called on everyone who was targeted to sue for civil and criminal charges.

Leal and Stelle say they know their struggle is only beginning.

“We tried to prepare as much as possible for this. We’re betting everything on this project,” Leal said. “Demonetization of fake news means dealing with the worst of the internet: racists, xenophobes, and so on. From the moment you take the money away from these people, they never forget.” ___ Follow Biller on Twitter: @DLBiller