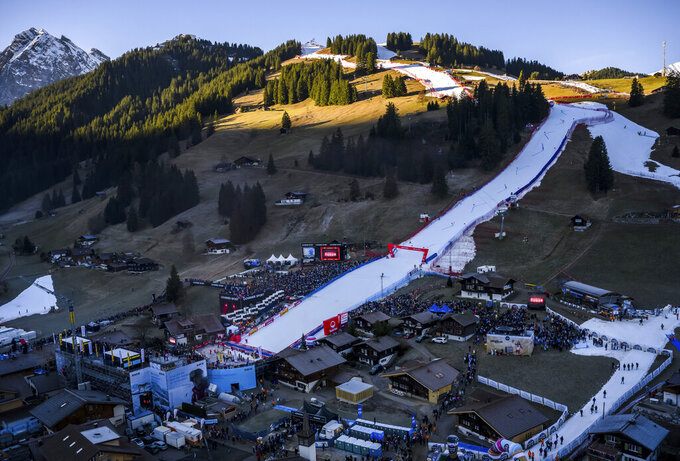 A aerial view of the race track before the first run of the men's giant slalom race at the Alpine Skiing FIS Ski World Cup in Adelboden, Switzerland, Saturday, Jan. 7, 2023. (Jean-Christophe Bott/Keystone via AP)

Odermatt, the Olympic champion, protected his first-run lead in fading light and even extended it with the fastest second-leg time to finish 0.73 seconds ahead of Henrik Kristoffersen.

Kristoffersen bowed in a show of respect when greeting Odermatt in the finish area and gave him a thumbs-up sign. Odermatt's teammate Loïc Meillard was 1.66 back in third.

A fourth win in five World Cup giant slaloms since October for the 25-year-old Swiss was also his 14th straight podium finish in his standout discipline through the past two seasons. That run includes his gold medal at the Beijing Olympics last February.

The home favorite was roared to the finish line by a sold-out crowd of more than 20,000, mostly gathered around the steep final slope of the storied Chuenisbärgli course.

Racers skied down a white ribbon of soft, sun-bathed artificial snow lined by lush green fields that are cow pastures in the summer.

The temperature was just above freezing for the first run Saturday morning and rose to about 7 Celsius (45 Fahrenheit) when the second leg started at 1:30 p.m. local time.