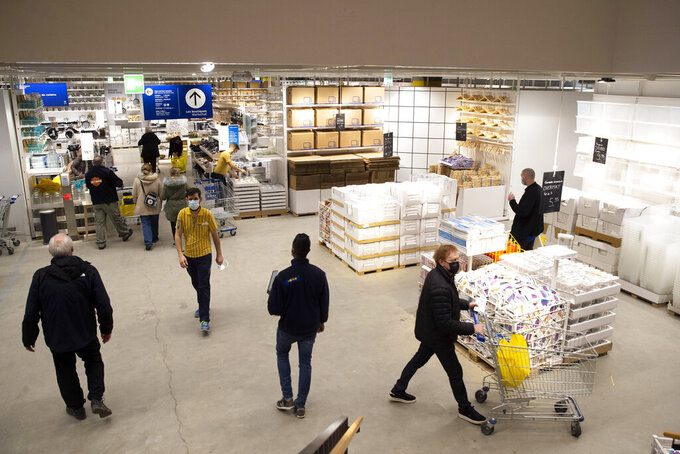 Customers wearing face masks as a precaution against the spread of coronavirus, in an Ikea store on its reopening day, in Geneva, Switzerland, Monday, March 1, 2021. Swiss authorities last week gave a go-ahead to what they called a “cautious” reopening despite a new, more-transmissible COVID-19 variant that first appeared in Britain that is increasingly circulating in the rich Alpine country. (Salvatore Di Nolfi/Keystone via AP)

GENEVA (AP) — The timing couldn’t have been better for Michele Pesson for Swiss authorities to order a reopening of stores across Switzerland amid a recent drop in coronavirus cases and deaths: Her son’s birthday is coming up, and she wanted to get her hands on something special for him to read.

Pesson, a school teacher and administrator, was one of the droves of shoppers who turned out on Monday in a Geneva shop of well-known Swiss bookstore chain Payot to buy up magazines, books and other wares after a six-week shutdown that left only essential stores in Switzerland open because of the pandemic.

“Honestly, it does a lot of good," she said. “You get the feeling that it's something that's not just the stores that are opening — but it's a whole social aspect that's reopening.”

Swiss authorities last week gave a go-ahead to what they called a “cautious” reopening despite a new, more-transmissible COVID-19 variant that first appeared in Britain that is increasingly circulating in the rich Alpine country.

In mid-January, authorities ordered the closure of stores except for supermarkets, pharmacies and other essential businesses — around the time that the country of 8.5 million was tallying more than 3,000 new coronavirus cases per day based on a seven-day average. That rate has gradually dropped in recent weeks, now to about 1,000 per day — or less.

The seven-day average of deaths has come in in the single digits in recent days, declining steadily from more than 70 on New Year's Day and a plateau of over 80 per day in most of November and December.

President Guy Parmelin last week acknowledged public pressure for a faster reopening, but called for “discipline” in the face of the new variant's spread. A reopening of restaurants and bars is planned for April 1, but that could be moved forward “if the situation continues to improve,” he said.

He cited rising vaccinations and COVID-19 testing in Switzerland as reasons to be confident.

Shop owners too expressed relief Monday that life was getting a bit closer to normal.

Nabil Slimani, manager of a Geneva store of snowboard, freeski, surf, skate and streetwear vendor Blue Tomato, said the closures last month and other forced closures in November “were really starting to weigh us as much as on the customers."

He said more customers flooded into the store after a previous shutdown last year, and this time, “it's been pretty calm ... it hasn't been crazy.”

Ikea reported a few longer lines than usual. Spokesman Aurel Hosennen said Monday wasn’t nearly as busy as after a reopening from a longer lockdown last spring, when visits to reopened stores were nearly twice as much as on a normal day. On Monday, traffic was up about 30% from a normal Monday.

But the managers of the Payot bookshop said a combination of a back-to-school rush after university holidays and an eagerness to return to the feel of new books — after some online shopping in recent weeks — was driving up traffic on Monday.

"For a month and a half, people missed coming to bookstores," said Christophe Jacquier, the Payot store manager. “There's a real pleasure for people to come to hunt for and chose their books — it's not the same thing as searching on the Internet.”