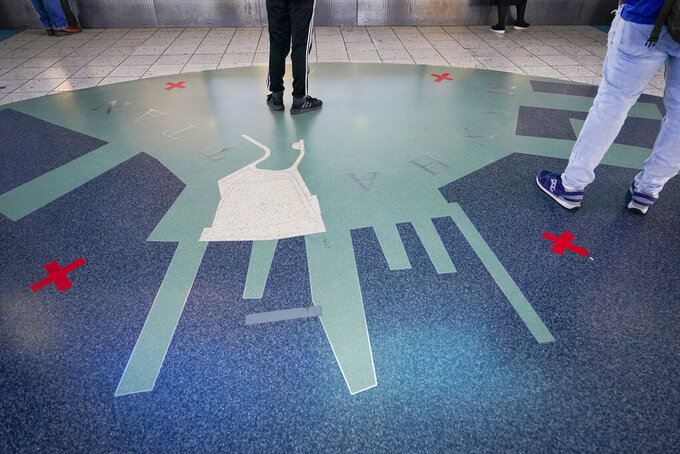 Red markers on the floor of the ferry waiting room show the proper amount of social distance for commuters, Tuesday, Nov. 10, 2020, in the Staten Island borough of New York. New York City officials are raising awareness and its efforts in stemming a rise in Covid-19, on Staten Island. (AP Photo/Mary Altaffer)

SYRACUSE, N.Y. (AP) — Two big upstate colleges, Syracuse University and the University at Albany, said they would switch to fully remote learning as the coronavirus pandemic continued its resurgence around New York.

Nearly 4,000 more people tested positive for the virus across the state Monday, another high since the early spring. Over the past seven days New York has reported an average 3,200 new cases per day, up nearly 50% from just a week earlier, with some of the increase being driven in the central and western parts of the state.

The University at Albany switched to fully remote learning Tuesday. Syracuse said it would immediately suspend all in-person events sponsored by school or student organizations and move classes online next Monday, making it easier for students to leave campus before the Thanksgiving break.

The move does not affect intercollegiate sports.

Syracuse administrators attributed its increasing rate of infection to rising caseloads in surrounding central New York and the “understandable fatigue but ill-advised complacency on the part of some in our community who are not fully adhering to public health guidelines.”

Gov. Andrew Cuomo on Monday placed pandemic-related restrictions on gatherings in the Syracuse area, a so-called yellow zone that includes the campus. Buffalo and Rochester, which are both seeing a surge in the virus, also face new restrictions.

Separately, University at Albany president Havidán Rodríguez said the school would switch to remote learning for the rest of the semester.

“While we had hoped to finish the fall semester as we started, we were also prepared to move to fully remote learning, and the time has come,” Rodríguez wrote.

Colleges around the country have been dealing with thousands of coronavirus cases despite aggressive efforts to check the spread on campuses.

New York state still boasts a lower infection rate than most other states, but the virus has increasingly been making inroads in places where the pandemic was generally mild in the spring, while also creeping back in New York City, where nearly 24,000 people died.