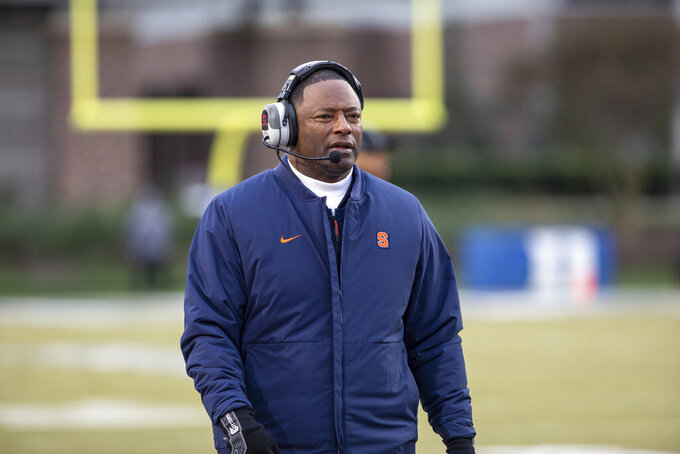 FILE - Syracuse head coach Dino Babers walks the sideline during an NCAA college football game against Duke in Durham, N.C., Saturday, Nov. 16, 2019. Babers enters his fifth year at the helm often repeating a phrase he despises: “I don’t know.” Such is life during a pandemic, when an invisible foe can alter a lineup in the blink of an eye. Less than two weeks before the season opener, Babers is trying to mold his team while also assuaging any fears the players voice regarding both the novel coronavirus and the racial tension across America. (AP Photo/Ben McKeown, File)

Syracuse coach Dino Babers enters his fifth year at the helm facing a rebuild after a down season.

Not an easy task in this environment. Less than two weeks before the season opener, Babers was trying to answer every health question while molding his team and assuaging any fears the players voice regarding both the coronavirus and the racial tension across America.

Rapid growth is a top priority. The Orange finished 5-7 and 2-6 in the Atlantic Coast Conference last fall after posting 10 wins the previous season.

“Coming into camp last year we felt like we were at the top. We had high expectations for ourselves, everybody did the way we performed,” redshirt senior defensive lineman Josh Black said. “Maybe we got a little bit too comfortable, maybe we kind of slacked here and there, didn’t do the things we did in our 10-3 season, but we learned a lot last year. We haven’t arrived yet, I like to say."

Babers has two new coordinators to help turn things around. Defensive boss Tony White’s unit is adapting well to his 3-3-5 scheme and offensive guru Sterlin Gilbert has a veteran in redshirt junior quarterback Tommy DeVito (213 of 337 for 2,360 yards and 19 TDs passing) to guide the team's uptempo spread offense.

Syracuse is scheduled to open the season Sept. 12 at No. 18 North Carolina.

Four starters return on a defense that registered 25 takeaways (13 interceptions, 12 fumble recoveries) to tie for 12th nationally last season, including a trio in the secondary that will give White a chance to wreak some havoc behind a solid front line: preseason All-America safety Andre Cisco has 12 career interceptions, tops in the Bowl Subdivision; junior DB Trill Williams tied for second in the ACC with three forced fumbles and also had a fumble recovery that he returned for a touchdown to cap an overtime win over Wake Forest in last year's season finale; and redshirt junior CB Ifeatu Melifonwu tied for the team lead with 10 passes defended. Who plays the rover in the system remains a secret.

The Orange return four starters on the offensive line after an injury-plagued season: redshirt senior Airon Servais has 37 straight starts, tops on the team, and excelled last fall after moving from center to left tackle; Dakota Davis ranked second on the team with 50 knockdowns; redshirt sophomore Carlos Vettorello is expected to start at center; and sophomore Matthew Bergeron returns at right tackle .

“Guys are flying around,” Servais said. “It's really good to see that energy and intensity and guys really wanting to hit people. It's an environment you want to be in.”

DeVito has to avoid the sacks that came as a result of an injury-riddled line and often holding the ball too long. Syracuse allowed 4.17 sacks per game (50) to rank 128th out of 130 teams last season. DeVito finished the year with a streak of 170 passes without an interception, the third-longest active streak in FBS heading into this season. Two-year starter Taj Harris (37 receptions, 15.1 yards per catch in 2019) leads the way at wide receiver.

Syracuse's coronavirus protocols were improved after the players sat out two practices to clear up misunderstandings about testing. Syracuse was the first school in the conference to announce that it would ramp up testing to three times a week during the season and the ACC followed suit. Athletic director John Wildhack said Aug. 25 the school had administered over 1,750 COVID-19 tests with five positives, none of them active. Only one player has opted out so far.

The Orange lost home games against Colgate and Florida State and road tilts against Rutgers and Western Michigan. New teams on the schedule are the season opener at North Carolina, Duke and the season finale at Notre Dame in December, a much tougher road. October games at home against Liberty and top-ranked Clemson on the road remain unchanged.