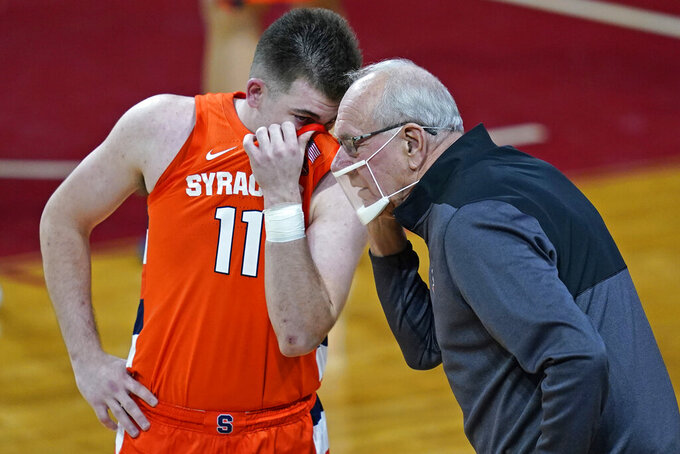 FILE - In this Dec. 12, 2020, file photo, Syracuse coach Jim Boeheim talks with guard Joseph Girard III during the first half of the team's NCAA college basketball game against Boston College in Boston. Barring another last-minute change, Syracuse will return to the basketball court on Wednesday night, Jan. 6, after a COVID-19 pause that lasted nearly three weeks. Boeheim is ready to roll and says the team just has "to do the best we can right now.” The Orange haven't played since an overtime victory over Buffalo on Dec. 19. (AP Photo/Elise Amendola, File)

Barring another last-minute change, Syracuse will return to the basketball court on Wednesday night after a COVID-19 pause that lasted nearly three weeks. Coach Jim Boeheim is ready to roll.

“It’s no fun not playing," Boeheim said on a Zoom call with reporters. "It is what it is and we just have to do the best we can right now.”

The last time the Orange (6-1, 1-0 Atlantic Coast Conference) departed the Carrier Dome court, they left as overtime victors over Buffalo on Dec. 19. The 107-96 win over the Bulls marked the second time in a three-game span that Syracuse had eclipsed the 100-point mark, something the Orange hadn't done since December 1993. Syracuse opened ACC play with a 101-63 win at Boston College a week earlier.

Still, the Orange had played and won three games in a seven-day span after suffering their only loss of the season, a 10-point setback at then-No. 21 Rutgers, and sophomore forward Quincy Guerrier was emerging as a key player. He had 59 points and 32 rebounds in the three games and converted 19 of 26 free throws.

Then COVID-19 issues surfaced after the Buffalo program returned positive tests and the Orange had to pause. A home game against Notre Dame and road contests against Wake Forest and North Carolina were postponed while the players awaited the next move.

The team returned to practice on Sunday to get ready to face Pittsburgh (5-2, 1-1 ACC) instead of No. 25 Florida State. The teams agreed to move their game scheduled for mid-February after the Seminoles had to pull out because of a positive COVID-19 test within their program. The Panthers also haven't played in a while — since losing to Louisville just before Christmas.

Boeheim, in his 45th year as head coach at his alma mater, said players who tested negative worked out individually with a coach and called that a good thing.

“That’s helpful, certainly helpful for conditioning, but obviously it’s not the same thing as having basketball practices," he said. "I don’t even want to count the number — we’ve missed 25-30 practices since the start of the basketball season, which is an incredible number. I’m sure it’s right up there probably with the most missed practices in the country.

“Our players have had to adjust to this already a couple of times and I would just say that they’ve come through it as well as I could hope. Our practices have been good, but there’s nothing like playing games.”

Boeheim said he would have a full roster for Pitt, which means 6-foot-10 senior center Bourama Sidibe will be available. He's been out since tearing a meniscus four minutes into the season opener against Bryant and undergoing surgery.

“He’s worked hard individually," Boeheim said. "He’s had a couple of practices. Obviously, his conditioning is a long ways away, but he’s participating in full practices.”