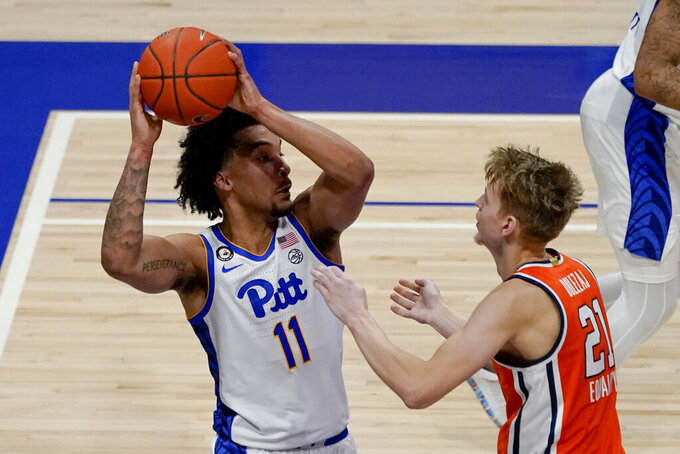 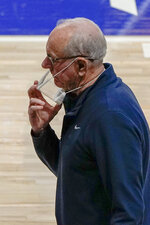 When Syracuse center Bourama Sidibe was injured just four minutes into the season and the novel coronavirus was wreaking havoc with the team, the Orange were in a bad place.

The 6-foot-10, 220-pound Sidibe, who excelled at the end of last season and figured to be an important piece of this year’s team, has yet to return after surgery for a torn meniscus. His presence has surely been missed, with forward Marek Dolezaj manning the middle and usually overmatched physically.

“When we lost our center, we didn’t have a (backup) center," coach Jim Boeheim said. “When you lose somebody and you have somebody, it eases the pain a little bit.”

Now, sophomore center Jesse Edwards is poised to become that somebody after a standout performance against Miami on Tuesday night.

With Syracuse trailing 11-2 at the start against the Hurricanes, the 7-footer from the Netherlands was inserted when Dolezaj picked up two early fouls. After playing just eight minutes and not scoring or collecting a rebound in losses at North Carolina and Pitt, Edwards scored seven points, snared six rebounds, and registered a block and two steals in 23 minutes to help the Orange to an 83-57 victory.

For a team that has struggled to defend the paint, Edwards' looming presence — his arms when outstretched extend 7 feet, 4 inches — helped stymie the Hurricanes inside.

“With Marek getting in foul trouble, Jesse was monstrous for us. I just thought he was a presence out there,” Boeheim said. “His size helped. He showed a lot of promise. It was by far the best that he’s played here. We'll see what we can get out of him. He's important for us."

For Edwards, who before Tuesday night had played only 20 minutes in six games, trying to get in game shape during the pandemic has been a big hurdle to overcome. He's improved his stamina by running for 30-40 minutes in practice to simulate game length under the direction of assistant coach Allen Griffin.

“I think it's a really big part,” Edwards, whose weight is up to around 220 pounds, said Thursday after practice. “I've been building on my body, getting a little heavier, a little stronger. My skills, I feel like they've been there for a while. I think the running and the conditioning really gave me the opportunity to show that.”

Syracuse was coming off a disheartening loss last Saturday against improving Pitt. Leading 37-32 at halftime, the Orange were trounced in the second half, allowing 64 points, and lost by 20 (96-76). Against Miami, Edwards and freshman guard Khadary Richmond (seven points, eight assists, and five steals in 20 minutes), sparked an impressive comeback. The Orange led by 14 at halftime and cruised.

“I'm learning to use my length,” Edwards said.

Boeheim figures his Orange (8-4, 2-3 Atlantic Coast Conference) have lost at least 30 practices because of the pandemic, which has afflicted the starting backcourt of junior Buddy Boeheim and sophomore Joe Girard. Both were sick with COVID-19 and their offensive production has suffered.

A deft shooter from outside, Buddy Boeheim, who missed three of the first four games of the season while in quarantine, is shooting just 29.4% from long range, though he leads the ACC in turnover ratio (2.82), just ahead of Richmond (2.59) in second. Girard has had several subpar performances — most recently in the consecutive road losses against UNC and Pitt, scoring just eight points in the two games — and is making just 34.4% of his shots.

“It takes a while to get back from that,” coach Boeheim said. “There's no question.”

Both got back on track against Miami with nearly identical performances, each scoring a season-high 23 points.

“Buddy and I both don’t like making excuses," said Girard, who is shooting 36.3% from deep, his 29 3-pointers tied with Alan Griffin for the team lead. “Obviously, we’re feeling better as time goes on.”