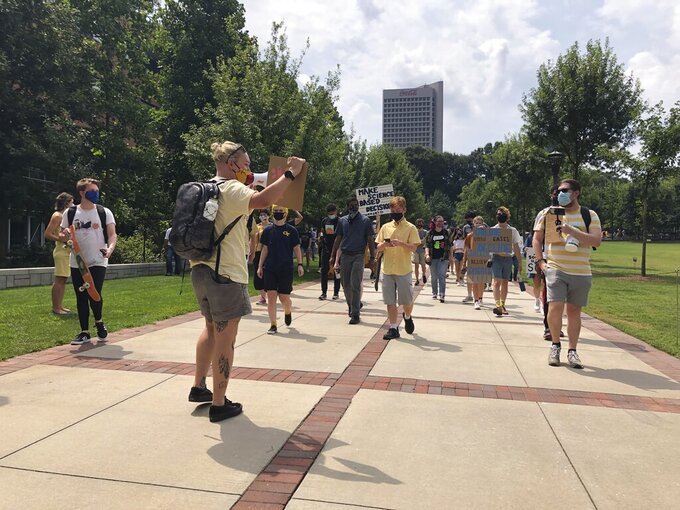 Syracuse University has suspended 23 students following a large on-campus gathering, the latest example of college crackdowns on the kind of socializing that can spread the coronavirus and sink plans for in-person learning this semester.

“We have one shot to make this happen,” Haynie wrote in a letter to students. “The world is watching, and they expect you to fail. Prove them wrong.”

Social media has been filled with such gatherings in recent weeks as college students make their way back to campuses nationwide.

Purdue University suspended 36 students for going to a party. Other suspensions have been reported at Virginia Tech, St. Olaf College in Minnesota and Radford University in Virginia.

Some universities have brought students back only to reverse course and move classes online amid outbreaks linked in some cases to student housing and parties. Notre Dame and Michigan State universities are among the latest to announce the switch this week. The University of North Carolina at Chapel Hill said it would revert to remote learning after clusters of the virus were discovered in dorms, a fraternity house and other student housing.

As at other campuses, Syracuse students returning to campus were asked to sign a pledge to follow guidelines, which also include avoiding travel during the semester and submitting to virus testing. Campus security broke up Wednesday's gathering, and the students identified so far received interim suspensions, which can be appealed.

Penn State on Thursday suspended a fraternity for hosting a party that violated the school’s COVID-19 ban on Greek gatherings. Videos and photos showed the Pennsylvania Lambda chapter of Phi Kappa Psi hosting an indoor gathering of more than 15 people, university officials said.

Penn State officials also said they had to disperse crowds of students, many of them maskless, who were congregating on campus late Wednesday.

In a note to the campus community, Penn State President Eric Barron warned that such behavior could prompt the university to send students home and shift to remote instruction.

“I ask students flouting the University’s health and safety expectations a simple question:" Barron wrote. "Do you want to be the person responsible for sending everyone home?”

Collin Binkley in Boston and Michael Rubinkam in northeastern Pennsylvania contributed to this report. Thompson reported from Buffalo, N.Y.