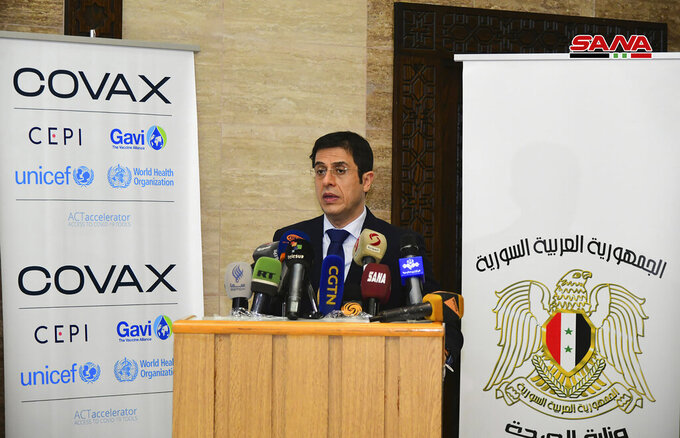 This photo released by the Syrian official news agency SANA, shows Syria's Health Minister Hassan Ghabbash, during a press conference where he announced receiving the first batch of AstraZeneca Covid-19 vaccines, in Damascus, Syria Thursday, April 22, 2021. Ghabbash said that the Syrian government received a batch of 203,000 COVID-19 vaccines Thursday, in a move aimed at speeding up a sluggish inoculation process in the war-torn country. (SANA via AP)

DAMASCUS, Syria (AP) — The Syrian government received a batch of 203,000 COVID-19 vaccines Thursday, the health minister said, part of a push to speed up a sluggish inoculation process in the war-torn country.

The arrival of the United Nations-secured jabs came as a new wave of infections overwhelms medical centers around Syria. The AstraZeneca vaccines are part of a campaign aiming to vaccinate 20% of the country’s population before the end of the year.

Syria's government controls two-thirds of the country, with the rest held by rebels and Kurdish factions. Millions have fled the country or been displaced, and the war has killed some half a million people from the pre-war population of 23 million.

Health Minister Hassan Ghabbash made the announcement during a news conference held in the capital Damascus. He said the vaccine will be given first to frontline workers, the elderly and those with chronic diseases.

The 203,000 jabs that arrived in Damascus Thursday will cover government-held areas and those under the control of Kurdish fighters in the northeast. Hundreds of thousands more are scheduled to arrive in the coming months.

“The priority for immunization will be frontline health workers who are the first line of defense against COVID,” said Ted Chaiban, regional director for the Middle East and north Africa at UNICEF. Speaking with The Associated Press from neighboring Jordan, Chaiban added that after health workers, older people will be vaccinated.

Chaiban added that the total cost of the shots from WHO and UNICEF is $38 million to complement what is provided by U.N.-led COVAX program for the world’s poorest nations and Gavi, the Vaccine Alliance. UNICEF is seeking an additional $12 million for the plan.

“The immunization will begin today but we need to stress that the numbers of vaccines that have gone into the country are limited,” Chaiban said adding that in addition to medical centers, hundreds of mobile teams will go to vaccinate people in different and remote locations. "More (vaccines) need to arrive.”

The Syrian government has registered over 21,500 cases — including 1,483 deaths — in areas under its control since the first case was reported in March 2020. Over 21,000 infections and over 640 deaths have been recorded in rebel-held northwestern Syria, while the Kurdish areas in the northeast registered 14,400 cases including 477 deaths.

Officials in government-controlled areas had already rolled out limited vaccinations following an announcement by Damascus in February that it received an undetermined amount of vaccine from an unnamed friendly country.

Separately, the United Arab Emirates said it sent a shipment of COVID-19 vaccine doses that arrived Tuesday in Damascus to help Syria fight the pandemic. It didn’t say how many doses or which vaccine.

The WHO had said the vaccination campaign in Syria was expected to start in April. It aims to inoculate 20% of the population by the end of 2021.