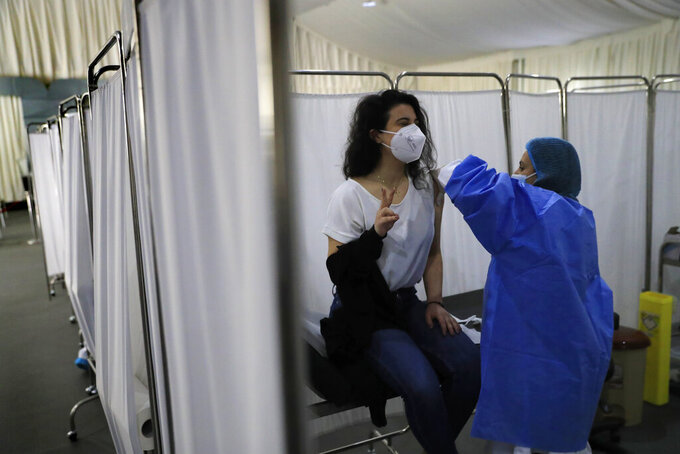 A woman flashes a victory sign as she receives the Pfizer-BioNTech COVID-19 vaccine during a nationwide vaccination campaign, at the Saint George Hospital, in Beirut, Lebanon, Tuesday, Feb. 16, 2021. Lebanon launched its inoculation campaign after receiving the first batch of the vaccine — 28,500 doses from Brussels with more expected to arrive in the coming weeks. (AP Photo/Hussein Malla)

BEIRUT (AP) — The government of war-torn Syria said Wednesday it will send emergency oxygen supplies to neighboring Lebanon, which has experienced shortages amid a surge of coronavirus infections in both countries.

The gesture comes as the health care sectors of the neighboring countries face serious challenges compounded by the pandemic and unprecedented economic woes.

Syria's health care infrastructure has been battered by a 10-year war and dependency on foreign aid as Assad's government faces growing Western sanctions.

For Lebanon, Syria's gesture comes at a time of political deadlock among rival groups who are deeply divided over Syria. Hassan is allied with the Iran-backed Hezbollah group, which has been a main backer of Assad.

Syrian Health Minister Hassan Ghabbash said his visiting Lebanese counterpart would depart Damascus with the first batch of oxygen from Syrian plants. The amount going to Lebanon, reported to be 75 tons by Syrian media, won't impact needs in Syria, he said.

Lebanon's health minister Hassan said oxygen supplies would last only through Wednesday, adding that bad weather had delayed the arrival of ships bringing in oxygen. The supplies from Syria would avert the loss of “thousands of lives,” he said.

“There are currently a thousand patients in Lebanon on ventilators. The amount of oxygen we have is sufficient for today,” Hassan said.

The situation in Syria is also critical. World Health Organization officials said hospital beds are at full capacity in the capital Damascus, and infection cases are at their highest amid a dearth of testing capabilities.

Syria has recorded more than 17,000 infections and 1,175 deaths. The country is in a deep economic crisis, with more than 80% of the population living in poverty.

Both countries are witnessing an unprecedented crash of their local currencies.

Lebanon has been struggling with a surge of infections since the start of 2021, and a weeks-long lockdown has only brought the numbers down slightly. WHO said intensive care-unit beds are more than 85% full in the small country of 6 million people, including over 1 million Syrian refugees.

A vaccination campaign began in Lebanon last month, with over 970,000 people registered to be vaccinated and some 156,000 doses already administered.

Later on Wednesday, the first shipment of AstraZeneca vaccines arrived in Beirut. The government had said it would delay administering them until the vaccine was cleared for use by international health regulators following concerns about possible blood clotting. The European Union’s drug regulatory agency subsequently said last week the vaccine does not increase the overall incidence of blood clots and the benefits of using it outweigh the possible risks.

Lebanon had secured 2.73 million shots of the AstraZeneca vaccine through the WHO-led platform and ordered more directly through the company.

Syria said it has received some vaccines but it has yet to launch a national vaccination campaign. WHO announced Tuesday it will oversee a vaccination campaign in Syria expected to start in April with the aim of inoculating 20% of the population by the end of 2021.