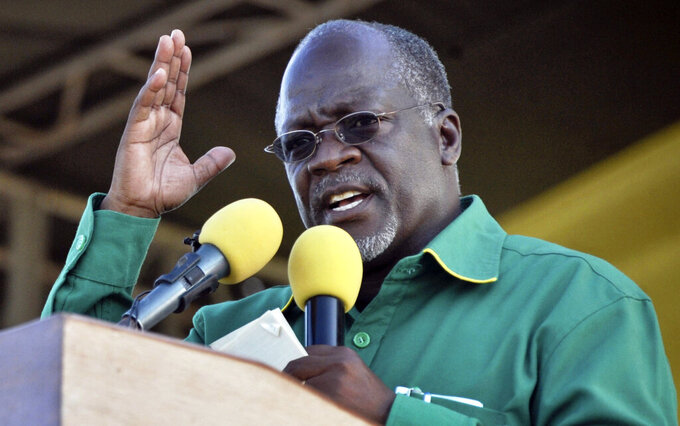 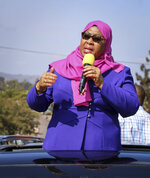 Magufuli's death was announced on Wednesday by Vice President Samia Suluhu, who said the president died of heart failure.

“Our beloved president passed on at 6 p.m. this evening," said Suluhu on national television. “All flags will be flown at half-mast for 14 days. It is sad news. The president has had this illness for the past 10 years.”

The vice president said that Magufuli died at a hospital in Dar es Salaam, the Indian Ocean port that is Tanzania's largest city.

Although the vice president said the cause of Magufuli’s death was heart failure, opposition politicians had earlier alleged that he was sick from COVID-19.

Magufuli had not been seen in public since the end of February and top government officials had denied that he was in ill health even as rumors swirled online that he was sick and possibly incapacitated from illness.

Magufuli was one of Africa's most prominent deniers of COVID-19. He had said last year that Tanzania had eradicated the disease through three days of national prayer. Tanzania has not reported its COVID-19 tallies of confirmed cases and deaths to African health authorities since April 2020.

But the number of deaths of people experiencing breathing problems reportedly grew and earlier this month the U.S. embassy warned of a significant increase in the number of COVID-19 cases in Tanzania since January. Days later the presidency announced the death of John Kijazi, Magufuli’s chief secretary. Soon after the death was announced of the vice president of the semi-autonomous island region of Zanzibar, whose political party had earlier reported that he had COVID-19.

Critics charged that Magufuli’s dismissal of the threat from COVID-19, as well as his refusal to lock down the country as others in the region had done, may have contributed to many unknown deaths.

It is hard to gauge how most Tanzanians regarded Magufuli’s COVID-19 skepticism, in a country where he remained genuinely popular among many for his seemingly frank talk against corruption even as he curtailed political freedoms and increasingly asserted an authoritarian streak. Police arrested at least one man earlier this week who was accused of spreading false information about Magufuli's health.

First elected to the presidency in 2015, Magufuli was serving a second five-year term won in 2020 elections that the opposition and some rights groups said were neither free nor fair. His main opponent in that race, Tundu Lissu, had to relocate to Belgium after the vote, fearing for his safety. Lissu, who was among the first to raise questions about the whereabouts of Magufuli after he went missing for several days, had been shot 16 times back in 2017, an attack he blamed on government agents because of his criticism of the president.

Magufuli had become so powerful by the start of the COVID-19 outbreak that he could deny the existence of a pandemic without incurring the criticism of his predecessor and other prominent people within Tanzania. In early 2021, amid speculation that Magufuli would seek an unconstitutional third term when his mandate expired in 2025, his ruling Chama Cha Mapinduzi party was compelled to deny such a thing could happen.

John Pombe Magufuli was born on Oct. 29, 1959, in the rural area of Chato in the country’s northwest. The son of a subsistence farmer, he tended his father’s cattle but was a good student, seeing classroom studies as a way out of poverty. Magufuli earned a bachelor’s degree in mathematics and chemistry at the University of Dar es Salaam in 1988. Much later, in 2009, he earned a doctorate in chemistry from the same university.

For years he was a secondary school teacher and then a chemist with a farmers’ cooperative union before entering politics as a lawmaker representing Chato in the National Assembly. The legislative role was a springboard to a career in national politics, and he served in several Cabinet positions, notably as the hardworking public works minister nicknamed “the bulldozer” in the administration of predecessor Jakaya Kikwete.

A reputation as an incorruptible man was widely seen as one reason for his selection as the new leader of Chama Cha Mapinduzi, the party that had dominated Tanzania since independence but whose popularity was declining in large part because of allegations of rampant corruption.

In 2015, the newly elected Magufuli made news on his first day in office. He showed up unannounced in the morning at the Ministry of Finance offices to see how many officials had come to work on time. That week he also banned unnecessary trips by government officials, as an austerity measure. He soon canceled Independence Day celebrations and said the funds budgeted for the event would be used to improve roads and infrastructure in Dar es Salaam, the commercial capital. Magufuli also fired a number of top government officials in his anti-corruption crusade.

At least in the early days of his presidency, Magufuli was seen as the leader Tanzania needed. He was widely admired by Tanzanians but also by others in East Africa who, citing his tough stance against corruption, wished for a leader like him. But very quickly others saw signs of intolerance as Magufuli cracked down on dissenters and those who criticized his work methods.

In early 2016 Magufuli stopped live broadcasts of parliamentary debates in which the opposition criticized the government, and in July that year he banned political rallies.

Magufuli’s harsh rule was extended to the country’s LBGT community, with his government preventing aid agencies from supporting same-sex groups to prevent the spread of HIV/AIDS.

Amnesty International criticized several bills supported by Magufuli and passed into laws as designed to “stifle all forms of dissent and effectively clamp down on the rights to freedom of expression and peaceful assembly.”

But it was Magufuli’s denial of COVID-19 that brought him intense international attention.

Soon after the first case of the disease was confirmed in Tanzania in March 2020, Magufuli urged people to go to churches and mosques to pray. Magufuli, a devout Catholic, pronounced that “coronavirus is a devil ... and cannot sit in the body of Christ.” Then in April the country stopped cooperating with the international community regarding its COVID-19 caseload.

Magufuli announced in June that COVID-19 had been eradicated from Tanzania by three days of national prayer. He spoke against social distancing and the wearing of masks and questioned the efficacy of vaccines. He even sent samples from bicycle lubricant, papaya fruit and a quail bird to be tested for the coronavirus in his bid to discredit testing.

“Countries in Africa will be coming here to buy food in the years to come … they will be suffering because of shutting down their economy,” he said of others imposing lockdowns.

However, people leaving Tanzania reported that intensive care units in hospitals were filling up with people with severe respiratory illness. Others said that burials were being held at night to hide the numbers of deaths. Migrants from Tanzania were found to have COVID-19. Government officials denied most of these accounts, and health officials who reported problems related to COVID-19 were fired.

Critics say Magufuli’s legacy will be turning a country previously praised for its tolerance and relative stability into a more repressive state. Under founding president Julius Nyerere, Tanzania was an influential country as the host of pan-African liberation groups including Nelson Mandela’s African National Congress.

“Tanzania has weaponized the law to the point that no one really knows when they are on the right or wrong side of it,” Deprose Muchena, an Amnesty International official in Africa, said of Magufuli’s rule in an October 2020 report.

Politicians were arrested for holding or attending meetings, online activism was criminalized and non-governmental organizations were stifled with endless regulations, that report said.

Zitto Kabwe, leader of the opposition Alliance for Change and Transparency party, said he had been arrested 16 times since Magufuli came to power.

Lissu, Magufuli’s main opponent and challenger in the 2020 polls, complained that security forces interfered with his campaign. His party’s offices were fire-bombed and dozens of parliamentary candidates were disqualified. Tens of thousands of opposition electoral agents were not accredited by the electoral commission, effectively denying them access to poll centers to verify results. On the eve of the election 11 people were shot dead by security forces, nine of them in Zanzibar as they protested alleged election fraud.

Despite the repression, Magufuli’s supporters say he was focused on Tanzania’s economic success and sought to implement ambitious projects that would lift more of his people out of poverty. Scores of infrastructure programs, including trains and the revival of Air Tanzania, were launched under Magufuli’s reign. Tanzania is one of the fastest-growing economies in the world, and in July the World Bank categorized it as a middle-income country five years ahead of schedule.

“We had envisaged achieving this status by 2025 but, with strong determination, this has been possible in 2020,” Magufuli tweeted at the time.

Magufuli’s survivors include a wife and two children.