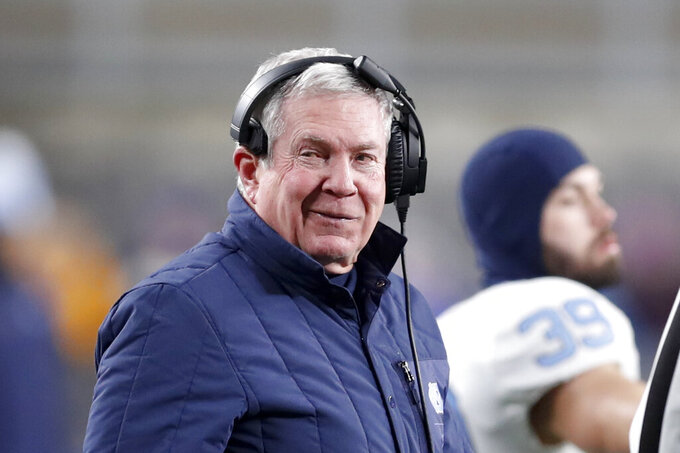 FILE - In this Nov. 14, 2019, file photo, North Carolina head coach Mack Brown stands on the sideline during an NCAA college football game against Pittsburgh in Pittsburgh. The Tar Heels are No. 18 to start the season and have 10 returning starters back on offense. (AP Photo/Keith Srakocic, File)

Mack Brown needed less than a year to stop North Carolina’s descent. Now he’s looking for a big jump in his second season.

The 18th-ranked Tar Heels bring back quarterback Sam Howell among 10 returning offensive starters, while the defense returns seven starters led by linebacker Chazz Surratt. That has the Tar Heels looking like a contender in an Atlantic Coast Conference race that will be very different due to the coronavirus pandemic, from 10 league games to Notre Dame as an ACC member.

“They’re communicating with us really well,” Brown said of the players at the start of preseason camp. “They trust us, we trust them, and we know we have a chance to be really good so the confidence is high. And that’s what makes it so much fun right now.”

That confidence is the most noticeable change from last year, when the College Football Hall of Fame member inherited a program that had lost 21 of 27 games. But the Tar Heels (7-6) beat South Carolina for their first season-opening victory against a power-conference opponent in 22 years, then closed by beating North Carolina State and Temple in the Military Bowl by a 96-23 margin.

Six losses came by a combined 26 points, including a 21-20 loss to top-ranked and reigning national champion Clemson on its way to a fifth straight ACC title.

Optimism starts with Howell, the league rookie of the year who threw a school-record 38 touchdown passes – the most by a true freshman in Bowl Subdivision history and fourth-most in the country. That offense had at least 530 yards in four of the last five games, including 620 in the N.C. State win.

“I’d like to say we don’t read or see any of the expectations, but we’re human,” Howell said.

Some other things to know about North Carolina for the 2020 season:

Surratt arrived in 2017 as a touted instate quarterback before moving to linebacker last season. He became an Associated Press All-ACC pick and a high NFL prospect while ranking fourth in the league in tackles per game (8.8) and having a team-high 6½ sacks.

The Tar Heels have holes on the defensive line with the departures of Brown-dubbed “kingpins” Jason Strowbridge and Aaron Crawford. The candidates for bigger roles include redshirt sophomore Jahlil Taylor, sophomore Tomari Fox and junior Raymond Vohasek.

Surratt and Jeremiah Gemmel (84 tackles) provide a strong linebacker tandem. Meanwhile, Brown said the secondary is “deeper and faster” than last year with returning starters like Storm Duck and Myles Wolfolk along with the addition of touted recruit Tony Grimes.

The pandemic canceled UNC’s spring practices, while the program paused voluntary workouts for a little more than a week in July due to positive test results. The Tar Heels also had to pause football workouts for multiple days in August.

North Carolina’s revamped schedule shed notable nonconference matchups at No. 21 UCF and against No. 11 Auburn in Atlanta. The Tar Heels host Charlotte from Conference USA on Sept. 19.

As for the 10-game league schedule, the Tar Heels lost traditional division matchups with Georgia Tech and Pittsburgh. But they added dates with No. 10 Notre Dame in a marquee day-after-Thanksgiving game and at Florida State.

Additions also include a home game with Wake Forest — meaning the Tar Heels will play the other three North Carolina-based ACC schools — and the season-opening visit from Syracuse on Sept. 12.