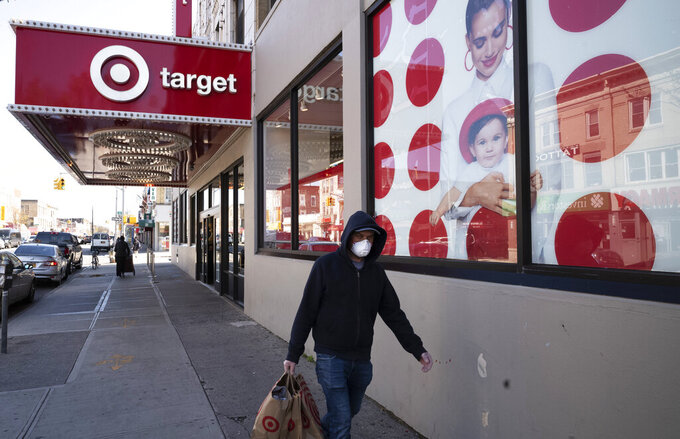 FILE - In this April 6, 2020 file photo, a customer wearing a mask carries his purchases as he leaves a Target store during the coronavirus pandemic, in the Brooklyn borough of New York. Target extended its strong sales streak through the holiday quarter and grabbed business from rivals. The Minneapolis-based discounter reported Tuesday, March 2, 2021, that it profit soared 66%, while sales jumped 21% for its fiscal fourth quarter. (AP Photo/Mark Lennihan, File)

NEW YORK (AP) — Target will plow $4 billion into its business each year for the next several years to redo its stores, add new ones and speed up delivery as the discounter aims to keep up with increasingly demanding shoppers shaped by the pandemic.

As part of the investments announced Tuesday, Target will accelerate the pace of building small-format stores, with plans to add 30 to 40 new stores this year, up from 29 last year. It also will step up the pace of its store remodel program. It will remodel 150 stores this year, and then push that number to 200 remodels a year later.

But safety will remain top of mind even as the threat of COVID-19 should diminish with the vaccine rollout. The Minneapolis retailer says it will implement more contactless features from its restrooms to its checkouts and add distance between merchandise and at the checkout lanes.

The company is also testing a “merchandise sortation hub” in Minneapolis and will build five more this year. The hubs will help sort packages and speed up deliveries to customers ordering more online.

The capital investment is up 50% from the previous year.

The moves come as Target extended its sales streak through the holiday quarter and sales grew by more than $15 billion. That exceeded the company's annual sales growth over the past 11 years combined.

With the habits of millions altered because of the spread of COVID-19, online sales last year surged by almost $10 billion and Target made it increasingly easy to shop.

Target picked up $9 billion in market share from rivals in fiscal 2020.

Like all big-box stores, Target was allowed to stay open during the early onset of the pandemic last year, while department stores and mall-based retailers were forced to temporarily close because they were considered non-essential. That increased the dominance of Target and other discounters.

Kohl's reported on Tuesday mixed results for its fiscal fourth quarter, delivering a 30% increase in profits but a 10% drop in sales while offering an upbeat outlook. Nordstrom's online sales and off-price business helped power better-than-expected results, but it said Tuesday that it's dealing with inventory snags from the holiday season.

Target, which had already been expanding its delivery services before the pandemic, pushed even harder in that area. Same-day services such as picking up orders inside the store or at curbside, soared 212%, led by drive-up service, which increased more than 500%.

And its omnipresent store locations have been an advantage. More than 95% of Target's fourth-quarter sales were fulfilled by its own stores.

Target says that shoppers who use those services are spending more. First-time users of Target's drive-up service spent 30% more on average, the company said.

“We placed the physical store more firmly at the center of our omni-channel platform, and we created a durable sustainable and scalable business model that puts Target on a road of our own," Target CEO Brian Cornell said during its annual analysts' meeting.

Target's push starting in 2016 to build its own store brands, including Cat & Jack and Goodfellow & Co., have also pulled in shoppers. Ten of its brands each generate $1 billion or more, and four of those have crossed the $2 billion, the company said.

During a call with reporters on Tuesday, Cornell said he believes that the focus on safety will be with its customers for years to come. But he noted Target is preparing for newly vaccinated shoppers to spend more time at its stores and thus buy more impulse items as well as shop for clothing and other items.

“We are seeing a hopeful consumer who is looking forward to life post-pandemic," he added.

Target has also announced a series of partnerships that should help drive more shoppers to its stores. Late last year, it signed a deal with beauty chain Ulta Beauty that will place Ulta shops in more than 100 Target stores by mid-2021.

The company did not provide a financial outlook due to uncertainty related to the pandemic. Target was among many that pulled back on guidance at the onset of the pandemic.