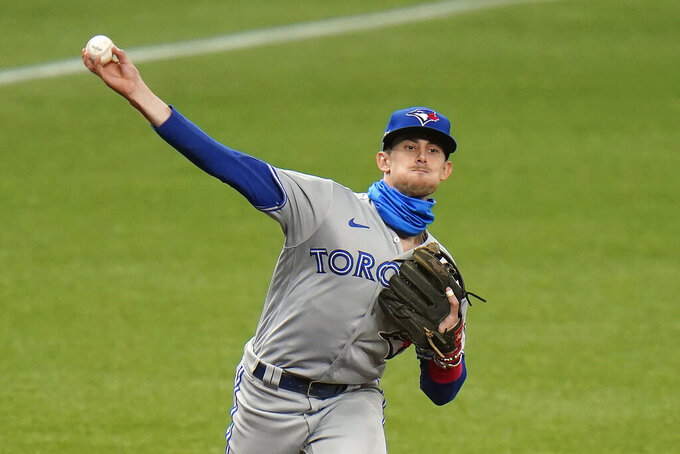 TORONTO (AP) — A brief taste of playoff baseball gave the young Toronto Blue Jays a big appetite for another shot at October glory.

“We’re hungry for more, so we’ll be back,” catcher Danny Jansen said after the Blue Jays were swept out of the wild-card round by the AL East champion Tampa Bay Rays.

Manager Charlie Montoyo expects the disappointing exit will increase his team’s desire to get better and go deeper into the postseason.

Toronto's lineup of position players was baseball's youngest this year.

The Blue Jays returned to the playoffs for the first time in four years, but with an entirely new cast — there’s not a single player left from the team that made consecutive trips to the ALCS in 2015-16.

Instead, a new core of stars led by Bo Bichette, Vladimir Guerrero Jr., Lourdes Gurriel Jr., Cavan Biggio and Teoscar Hernández bounced back from a 95-loss season in 2019, taking advantage of an expanded playoff field to make their first postseason appearance.

“We understand that we’re talented,” Bichette said. “Something great is, we never give up. We’re going to take that into next year, continue to try and get better. Just tighten up the little things.”

Toronto’s turnaround remarkable given the circumstances the team endured amid the COVID-19 pandemic, which led Canada’s government to bar the Blue Jays from playing home games north of the border. Instead, the Blue Jays endured a vagabond start to the season before finally moving into Sahlen Field in Buffalo, New York, home of their Triple-A affiliate. Once settled, the Jays thrived, going 17-9 in Buffalo.

“I said at the beginning that the guys that don’t complain, they’ll have a good chance to make it to the playoffs,” Montoyo said. “They never complained about not having a home and going through all the stuff that they went through.”

With the U.S.-Canada border still closed to nonessential travel, it’s not clear whether games at Rogers Centre will be able to resume next spring.

In the first season of his four-year contract, left-hander Hyun Jin Ryu went 5-2 with a 2.69 ERA in 12 starts, but couldn’t come through in his playoff appearance. Ryu was rocked for seven runs in 1 2/3 innings in Game 2 of the wild-card series. Bichette said the Blue Jays won't lose faith in their big lefty.

“We went out and got him for a reason and he’s done everything we’ve asked of him this year,” Bichette said. “He’s the guy we want out there and we believe in him every single time.”

Five of Toronto’s six free agents are pitchers, including midseason acquisitions Taijuan Walker, a right-hander, and Robbie Ray, a left-hander. Right-hander Matt Shoemaker is the third Blue Jays starter who will be a free agent this offseason, along with closer Ken Giles and setup man Anthony Bass, both righties. The only free agent among Toronto’s position players is infielder Jonathan Villar, a midseason pickup from Miami. The Blue Jays have club options for 2021 on right-handers Chase Anderson and Rafael Dolis. Right-hander Ross Stripling is eligible for arbitration, as are infielder Brandon Drury and Travis Shaw.