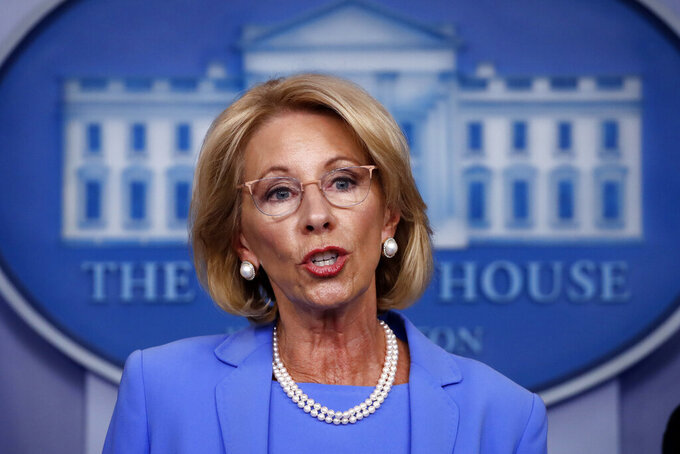 FILE - In this March 27, 2020, file photo, Education Secretary Betsy DeVos speaks about the coronavirus in the James Brady Press Briefing Room in Washington. The Chicago Teachers Union on Wednesday, May 20, 2020, announced it is suing U.S. Department of Education Secretary Betsy DeVos and the city's public school district, saying its policies interfere with the education of students with special needs during the coronavirus pandemic. (AP Photo/Alex Brandon, File)

CHICAGO (AP) — The Chicago Teachers Union on Wednesday announced it is suing U.S. Department of Education Secretary Betsy DeVos and the city's public school district, saying its policies interfere with the education of students with special needs during the coronavirus pandemic.

DeVos and Chicago Public Schools have failed “to provide resources and guidance for special education students" during the public health crisis, the union said in a news release announcing the federal lawsuit.

A spokeswoman for DeVos characterized the lawsuit as a political stunt designed to cover for the union's own failures.

"This is nothing more than political posturing for a headline," press secretary Angela Moribito said in a statement. "It’s sad to see the union making excuses for why they can’t educate all students instead of figuring out a way to make it happen.”

The district suggested the lawsuit, rather than the policies that prompted it, is detrimental to the education of special needs students.

"Make no mistake: this lawsuit against the district is not about helping students — it’s about avoiding the necessary steps to ensure our most vulnerable students are supported during this unprecedented crisis,” CPS said in a statement.

The union contends in the lawsuit that what it calls a CPS directive to teachers and case managers to rewrite about 70,000 individual learning plans is not only “physically impossible,” but that even trying to follow it takes valuable time that should be devoted to teaching special education students remotely.

The lawsuit seeks an emergency injunction to prevent the U.S. Department of Education “from enforcing regulations that place impossible administrative burdens on students, parents and educators," according to the news release.

The lawsuit is the latest example of the powerful 25,000-member union flexing its muscles. In 2012, CTU took on then-Mayor Rahm Emanuel with a seven-day strike, and it greeted Emanuel’s successor, Mayor Lori Lightfoot, last October with strike that shut down the nation’s third-largest school district for 11 days.

Just weeks ago, DeVos won praise from special education groups for saying school districts must continue to comply with the federal law requiring them to serve students with disabilities. Congress had asked her if she wanted the power to waive the law’s requirements because of the pandemic.