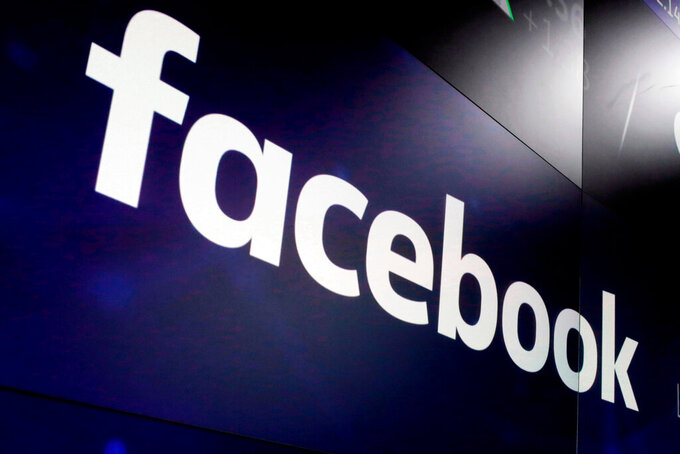 FILE - In this March 29, 2018, file photo, the logo for Facebook appears on screens at the Nasdaq MarketSite in New York's Times Square. Five technology giants reported mixed earnings results Thursday, Oct. 29, 2020 a sign of varying fortunes as they try to rebound from an pandemic-related economic slowdown earlier this year. While all five — Amazon, Google parent Alphabet, Facebook, Apple and Twitter — exceeded analyst expectations, gloomy forecasts and other uncertainties led to share-price declines for all but Alphabet in after-market trading. (AP Photo/Richard Drew, File)

Five technology giants reported strong earnings but mixed outlooks Thursday, a sign of varying fortunes as they work to rebound from a pandemic-related economic slowdown earlier this year.

While all five — Amazon, Google parent Alphabet, Facebook, Apple and Twitter — exceeded analyst expectations, gloomy forecasts and other uncertainties led to share-price declines for all but Alphabet in after-market trading.

On Wednesday, the CEOs of Facebook, Google and Twitter testified before the Senate Commerce Committee, rebuffing accusations of anti-conservative bias and promising to aggressively defend their platforms from being used to sow chaos in next week’s election.

Apple didn’t get its usual late-September surge in sales from its latest iPhone models, but still managed to eke out a slight increase in revenue during the July-September quarter, although profits fell.

Production problems lingering from factory shutdowns during the onset of the pandemic led to the iPhone delay, although analysts expect it will bounce back with a huge quarter during the October-December quarter that includes the holiday shopping season.

Apple’s revenue rose to $64.7 billion. Analysts surveyed by FactSet had braced for a dip to $63.6 billion. Profit, meanwhile, dropped 7% from the year-ago quarter to $12.7 billion. But earnings per share amounted to 73 cents, above the average estimate of 70 cents among analysts polled by FactSet.

Apple’s stock dropped nearly 5% in extended trading. Investors apparently were jarred by unexpectedly drops in revenue from both the iPhone and sales in China. Revenue from China plunged 29% compared to last year, raising fears that Apple may be getting hit by a backlash to the Trump administration's trade wars with that nation. iPhone sales fell 21% from last year to $26.4 billion, well below analysts' already lowered expectations.

Apple CEO Tim Cook teased that Apple may roll out another new product later in 2020.

Google’s corporate parent Alphabet returned to robust financial growth during the summer. In the previous quarter, it suffered its first-ever quarterly decline in revenue amid the economic slowdown stemming from the COVID-19 pandemic.

The company’s revenue for the July-September period rose 14% from the same time last year to $46.2 billion. Its profit soared 59% to $11.2 billion, or $16.40 per share. Both figures easily surpassed analyst estimates, lifting Alphabet’s stock price by more than 7% in Thursday’s extended trading after the numbers came out.

The rebound, as usual, was propelled by the ad spending that has established Google as one of the world’s most proficient moneymaking machines. But the U.S. Justice Department could throw a monkey wrench into Google’s financial gears with a recent lawsuit that accuses the company of abusing its search dominance to boost its profits and stifle competition.

Facebook’s already-massive profit and revenue continued to grow along with its worldwide user base, but looking ahead to 2021 the company predicted a “significant amount of uncertainty.”

“Facebook has rebounded nicely from both the early-pandemic advertiser pullout” as well as a July advertiser boycott, eMarketer analyst Debra Aho Williamson said. While the company remains a major destination for advertisers, Williamson expects more advertisers to take a skeptical look at their “reliance on Facebook" in the coming year.

The social media giant’s average monthly user base was 2.74 billion as of Sept. 30, up 12% from a year earlier.

Amazon continued to benefit from shopping trends during the pandemic, reporting record profit and revenue during the third quarter. The company reported net income of $6.3 billion in the three months ending Sept. 30, nearly tripling from the previous-year period.

The online shopping giant is also expecting a big end to the year as the holiday shopping season picks up. Amazon said Thursday that it expects fourth-quarter sales to rise between 28% and 38% from a year ago to between $112 billion and $121 billion.

The last three months of the year are always Amazon’s biggest, due to the holidays. But this year, Amazon also held its Prime Day sales event during the quarter for the first time after postponing it from July to October due to the pandemic. Prime Day has become one of the company’s busiest shopping events of the year.

“We’re seeing more customers than ever shopping early for their holiday gifts,” said Amazon CEO and founder Jeff Bezos in a written statement. “Which is just one of the signs that this is going to be an unprecedented holiday season.”

Twitter posted much stronger than expected third-quarter results thanks to surging advertiser demand. But while its user base continued to grow, Wall Street grumbled and shares plunged after hours.

The San Francisco company earned $28.66 million, or 4 cents per share, in the July-September period. That’s down 22% from a year earlier, due to higher expenses in part related to COVID-19. Excluding one-time items, earnings were 19 cents per share. Revenue grew 14% to $936.2 million from $823.7 million.

Twitter had 187 million daily users, on average, in the third quarter. That’s up 29% from a year earlier, thanks to people signing up to follow U.S. politics and current events worldwide, but below analysts’ expectations of 195.6 million. The company no longer discloses monthly user figures.

Analysts were expecting a loss of 10 cents per share, adjusted earnings of 6 cents per share and revenue of $777.3 million, according to a poll by FactSet.

The company predicted uncertainty going forward, due in part to the upcoming U.S. election, and said it is “hard to predict how advertiser behavior could change.”