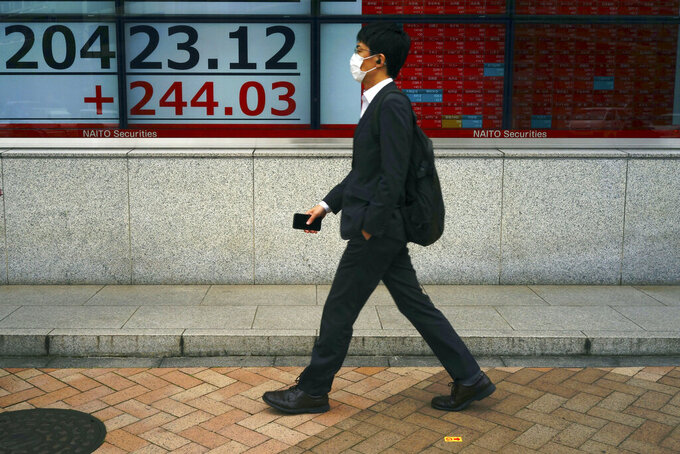 A man wearing a face mask walks past an electronic stock board showing Japan's Nikkei 225 index at a securities firm in Tokyo Monday, May 11, 2020. Asian stock markets are higher after Wall Street advanced as investors looked past dismal U.S. jobs and other data toward hopes for a global recovery from the coronavirus pandemic.(AP Photo/Eugene Hoshiko)

Wall Street was split on Monday, as continued gains for technology and health care stocks helped cover up for more prevalent losses elsewhere.

Through the muddled day, one of the market’s few points of clarity was that investors continue to love technology stocks.

Even with the coronavirus pandemic throwing the global economy into disarray, tech stocks in the S&P 500 have been remarkably resilient. They’re up 4.1% for 2020 as investors look for companies that can be winners in both a ”normal” and a stay-at-home economy.

This year’s second-best sector has been health care, which has trimmed its loss for 2020 to just 1%.

Biotech stocks were particularly strong Monday. And Cardinal Health had the biggest gain in the S&P 500, up 6.7%, after reporting stronger-than-expected earnings for its latest quarter, partly because of increased pharmaceutical sales due to the pandemic.

Those gains helped to make up for 69% of stocks falling in the S&P 500. It also leaves the index within reach of its highest level since early March.

“People are looking ahead, and they’re saying, ‘OK, the pandemic has happened, and the damage has swept through our economy and our businesses, and now we’re planning on the growth after the carnage, so we’re valuing equities as if we’re going to go back to a decent growth environment,’” said Mike Zigmont, head of trading and research at Harvest Volatility Management.

The S&P 500 has rallied 31% since late March, at first on relief after the Federal Reserve and Capitol Hill pledged massive amounts of aid for the economy. More recently, some investors have focused on the possibility of a strong recovery later this year, after governments reopen economies and lift business-shutdown orders meant to slow the spread of the coronavirus.

That optimistic view took some hits Monday, though, as worries rose about the possibility of new waves of infections hitting countries that are further ahead in lifting lockdown measures. Investors pointed to small but disconcerting increases of infections in South Korea, China and elsewhere.

The worries helped lead companies whose profits are most closely tied to the strength of the economy to the market’s biggest losses.

“I don’t know why investors are feeling so comfortable with those expectations,” Zigmont said of forecasts for a turnaround in profit growth in 2021 and 2022. “They are so far away, and there’s so much uncertainty between now and then, and yet investors seem to be OK” with paying up in anticipation that companies will hit those targets.

Financial stocks fell 1.9% for the biggest loss among the 11 sectors that make up the index. Bank stocks have been hit hard this year on worries that the recession will lead to a wave of households and businesses defaulting on their loans. Bank of America dropped 4.2% Monday, and Citigroup lost 4.9%.

The data streaming in on the economy remain oppressively bad. After a report on Friday showed U.S. employers cut a record-setting 20.5 million jobs in April, Italy reported Monday its largest-ever drop in industrial production. More data reports this week include U.S. unemployment claims and retail sales and Australian jobs.

Companies remain uncertain about the future, with many opting to give no financial forecasts during their latest quarterly earnings reports.

Even outside the possibility of a resurgence of infections, many analysts see other reasons for skepticism. Strategists at Goldman Sachs said the market appears to be downplaying a drop-off in buybacks and dividends as companies look to preserve cash, the threat of more U.S.-China trade tensions and the possibility that the upcoming U.S. elections could lead to higher corporate tax rates.

Most of all, companies themselves are talking about how uncertain the recovery looks, which stands in stark relief to the quick, vigorous rebound that the stock market seems to be assuming will happen.