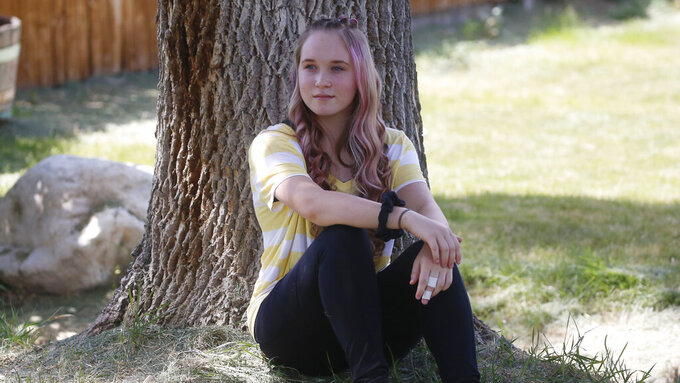 High school student Brianne Harmon is shown Monday, Aug. 10, 2020, in Magna, Utah. Harmon, 16, struggled at the end of last school year as she tried to find a quiet place to work in a remote school in a house with several relatives. She was in danger of failing three classes but after a series of sleepless nights, she managed to catch up, allowing her to continue with the drill team, a sport she loves. (AP Photo/Rick Bowmer) 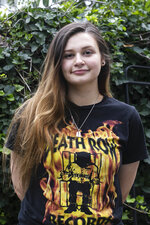 SALT LAKE CITY (AP) — With her baby brother in her arms, Kara Apuzzo tried to follow along in an online class as he squirmed or slept. Other times, the 18-year-old rushed to get ready for work at a front-line job at Target as her virtual high school lessons were still wrapping up.

Last school year was further complicated by computer issues that kept her from logging in and online tools that bedeviled even her teachers. Before the coronavirus pandemic, Apuzzo, who lives in New Haven, Connecticut, knew she wanted to go to college right after high school. Now, she's not so sure.

“Right now, I don’t know where I want to go with my life,” she said. “I feel so behind when it comes to what do college kids actually do. ... It’s scary, it’s so new — I don’t have any idea what I’m even doing.”

Educational disruptions forced by the pandemic are hurting teenagers at a time when many families also are struggling with layoffs and child care for young kids — challenges that are expected to persist as a new school year gets underway, largely with remote learning.

Some teens have to share computers with siblings or sign in to classes in crowded households or from their cars. Others have been laid off from after-school jobs that help provide for their families or work extra hours in essential industries, leaving less time for school. Students whose parents can't work from home also have less structure to push them to get their work done.

“They’re at home being their own teachers,” said Nick Mathern, vice president of K-12 Partnerships for the nonprofit Achieving the Dream, which helps students complete degrees through community colleges.

The transition from high school to college can be rocky for many teens, and the coronavirus crisis could widen the gap between kids with wealthier, college-educated parents and their lower-income peers, Mathern said.

“That’s a real danger when it comes to increasing inequality in our country,” he said.

Mathern’s group works with hundreds of U.S. institutions and is affiliated with Gateway to College, which helped Apuzzo improve her grades before the pandemic. Now, she's planning to work for a year before enrolling in college.

Schools and organizations like his, Mathern says, will have to get more creative in figuring out how to help older students like Apuzzo who are facing a new set of challenges.

Hope Spann, 19, had some of the same difficulties. She spent the last few months of the school year in Chicago, balancing her classwork from Beloit College in Wisconsin with watching her two nieces, ages 3 and 6, while her siblings worked at Walmart and Wendy's.

Separating squabbles and getting snacks between writing class and art history left the aspiring film designer with migraines and panic attacks.

“It’s definitely interrupting my life. At the same time, I’m doing the things I need to, to keep me healthy and keep my family together,” Spann said.

She’s now started a job at a nursing home and plans to balance it with online classwork when the school year starts.

In Philadelphia, 18-year-old Kayla Hammond works two jobs while helping watch her younger brother and sister. After a shooting near her high school last year, she started an alternative dual-enrollment program to get college credit while finishing high school. Subjects like chemistry and Chinese became overwhelming as she moved back home and looked for new work during the pandemic. She got through it and is planning to return to Philadelphia Community College remotely next month.

“I'm pretty much the only one out of my friends who is still in school,” she said. “They had dreams of going to a four-year college. COVID put that on hold for them.”

A recent report from Measure of America, a project of the New York-based nonprofit Social Science Research Council, says the number of people ages 16 to 24 who are disconnected from both work and school could spike to almost one in four, erasing a decade of gains and hitting levels higher than the Great Recession.

In the Salt Lake City suburb of Magna, 16-year-old Brianne Harmon struggled to find a secluded place for online lessons in a house with several relatives. With a heavy load of homework, she found herself in danger of failing three classes.

“I’m trying not to let my family down, not to let myself down to keep going with my career, but it gets hard with everything piling on,” Harmon said at the time.

That put her at risk of being barred from the drill dance team, a sport she loves. She retreated to her grandmother’s house and stayed up all night to pass her classes. She's going back to a hybrid of online and in-person school in the fall.

“I’m definitely nervous, but I’m excited to have something else stable in my life right now,” Harmon said.

Her math teacher, Michele Jones, said she heard from a number of students like Harmon.

“The stories you hear are just heartbreaking: ‘I’m taking care of three young siblings, I don’t have time to do school. I really don’t feel safe at home, Mom and Dad lost their jobs, there’s a lot of just stress,’” Jones said.

Along with the pandemic, her students also dealt with an earthquake and a temporary contamination in the water supply this spring. Remote attendance in her class dropped to 20% at times, a worrying number at a key time for math education.

“I do think this is recoverable academically,” Jones said. “For me, what I’m more concerned about is kids being really traumatized by this time. Feeling lost and abandoned and hopeless.”