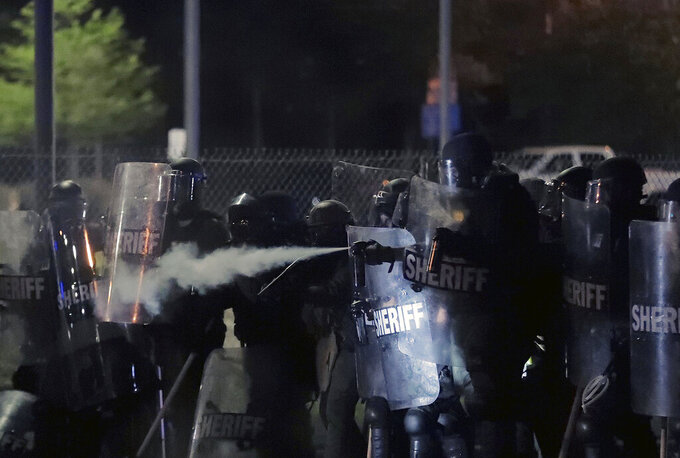 Shelby County Sheriff's deputies pepper spray a crowd of demonstrators advancing on the Hernando Desoto Bridge in Memphis, Tennessee, early Monday, June 1, 2020, as they protest the death of George Floyd in Minneapolis police custody May 25, 2020. (Daily Memphian via AP)

NASHVILLE, Tenn. (AP) — Nearly 50 people were arrested over the weekend in Tennessee, while many businesses saw property damaged and public buildings vandalized across the state during peaceful protests that turned violent in response to the death of George Floyd.

Volunteers continued cleanup efforts, scrubbing away graffiti and removing the debris of two days of protests. The demonstrations, like others nationwide, erupted after the death of George Floyd, a black man in handcuffs who pleaded for air as a white officer in Minnesota pressed a knee into his neck last week. They continued Monday evening with a peaceful protest outside the state Capitol in Nashville.

Inside the GOP-dominant Statehouse, black Democratic lawmakers spoke out against the violence, but also asked their Republican colleagues to not focus solely on the vandalism. Instead, they pleaded with their fellow members to understand what sparked the anger.

"I don’t want to walk around angry and in a controlled rage every day, but I want you to understand that if you dismiss their anger and avoid a solution, it will happen again,” said Rep. Vincent Dixie of Nashville.

On Monday evening, more than 60 National Guard troops at the state Capitol put down their riot shields at the request of peaceful protesters. Guardsmen had initially rushed to grab their shields and form a hard line to block the slowly moving crowd -- who were singing and chanting -- from advancing up the Capitol steps.

But the crowd remained calm, and Democratic lawmakers leaving the Capitol asked to be able to move past the line of guards to join the crowd. As the crowd continued to sing and call for justice for black Americans, slowly the shields began to drop even as Tennessee state troopers with batons in hand backed away.

The majority of the weekend arrests were made in Nashville, where fires were lit inside and outside the city’s historic courthouse. Thousands had peacefully rallied outside the state Capitol on Saturday, but demonstrations turned violent after darkness fell.

Meanwhile, 30 businesses were vandalized, including a handful of Nashville's famous honky tonks on Broadway. A statue of a former state lawmaker and newspaper publisher Edward Carmack, who espoused racist views, was toppled. That statue was taken Monday to a state museum.

Police have since arrested Wesley Somers, 25, and accusing him of setting fire to the building. Law enforcement have asked the public for tips to find others also suspected of causing damage.

For the third night in a row, Mayor John Cooper announced Nashville would be under a curfew starting at 10 p.m. Monday and running until 6 a.m. curfew. That comes even though no major demonstrations or clashes between police and protesters took place the day before.

In Memphis, Mayor Jim Strickland also imposed a similar 10 p.m. to 6 a.m. curfew for most people, except essential workers and those experiencing a medical issue. The National Guard, which has been in Memphis working on the new coronavirus outbreak response, will be in the city to help local authorities.

Strickland said he was on a call this weekend with mayors and police chiefs from 40 cities and curfews were discussed.

“They really felt curfews were needed once there is property damage or some kind of violent act,” Strickland said. “We saw that last night.”

Memphis Police Director Michael Rallings said he has seen videos of protesters being arrested that are being used by activists to allege police are using excessive force.

“An arrest is never going to be pretty,” Rallings said. He later noted the department has a “very elaborate use of force policy” and the department will deal with officers who transgress that policy.

Rallings reported that 10 businesses have been damaged, three officers have been shot at, and 44 protesters have been arrested since Wednesday, when protests began in Memphis.

A protest march began Monday evening at the historic Clayborn Temple in downtown Memphis. The temple was the headquarters for the 1968 sanitation workers' strike that brought the Rev. Martin Luther King Jr. to the city.

The demonstrations spreading across America were held around Tennessee over the weekend in response to the latest killings of black people by police.

Separate demonstrations were held in Knoxville, Murfreesboro, Chattanooga, but no curfews have been set in place as of Monday.

At least 10 arrests were made in Chattanooga on Sunday.

According to a spokeswoman, Chattanooga Mayor Andy Berke and Police Chief David Roddy “have agreed that, at this moment in time, instituting a curfew would be unnecessary and practically unenforceable.”