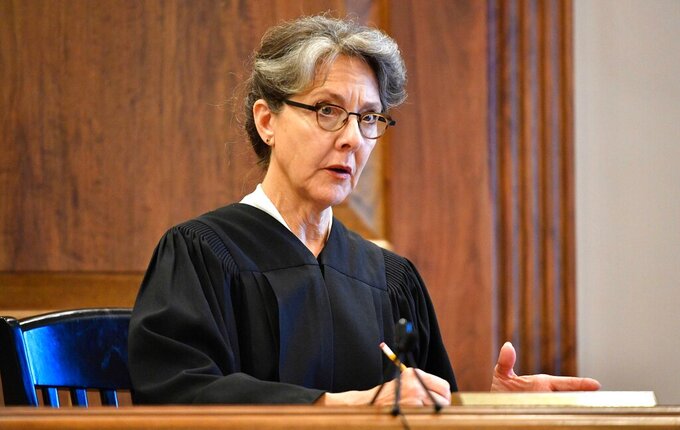 FILE — In this July 23, 2018, file photo, Davidson County Chancellor Ellen Hobbs Lyle presides over a court case in Nashville, Tenn. The longtime Tennessee judge who drew backlash from Republican officials for ordering an expansion of absentee voting during the COVID-19 pandemic won't seek reelection next year, saying it's a decision she made before GOP lawmakers unsuccessfully tried to remove her from office early this year. (Larry McCormack/The Tennessean via AP, File)

NASHVILLE, Tenn. (AP) — A longtime Tennessee judge who drew backlash from Republican officials for ordering an expansion of absentee voting during the COVID-19 pandemic won't seek reelection next year, saying it's a decision she made before GOP lawmakers unsuccessfully tried to remove her from office early this year.

This week, Davidson County Chancellor Ellen Hobbs Lyle informed members of the Nashville Bar Association that this will be her last term after 27 years in office. The general election for an eight-year term will take place in August 2022.

“I made this decision last year in 2020, and I informed my staff so they could begin to make their arrangements," Lyle wrote in a letter. "Little did I know then that before I would make this announcement I would be faced in 2021 with holding onto my job. As has always been the case with me, life is unpredictable, and 2021 has been true to form.”

While overseeing two lawsuits over Tennessee's mail voting restrictions, Lyle in June 2020 ruled in favor of a wide expansion of absentee voting during the pandemic. The ruling was ultimately overturned by the state Supreme Court to revert to Tennessee's excuse-based absentee criteria, but only after the state changed course to promise to allow people at higher risk of COVID-19 complications and their caretakers to vote by mail.

Later in the legal proceedings, Lyle extended absentee voting to all those living with a person at high risk of complications from COVID-19, ruling that the state had promised the Supreme Court those people could vote absentee as well.

Lyle’s rulings in the case were harshly criticized by Secretary of State Tre Hargett and Attorney General Herbert Slatery, both Republicans. Then early this year, as many as 67 of 73 House Republicans signed on in support of a resolution that would have initiated legislative hearings to consider Lyle's removal over the absentee voting case.

The push died amid outcry from members of the legal community who called it an unprecedented breach of judicial independence, and lined up in defense of Lyle's record on the bench. Afterward, lawmakers recalibrated toward what would become a new law to steer more constitutional legal challenges against the state out of Nashville courtrooms, where they currently are initially heard, and into a new three-judge panel system that will cycle in jurists from across the state.

The legislative back-and-forth over how to change the judiciary branch followed a year in which many states expanded access to absentee balloting or other voting methods due to concerns about the coronavirus spreading at crowded Election Day polling places, despite arguments by former President Donald Trump and his Republican allies that any expansions should have legislative approval.

Lyle was appointed twice by former Republican Gov. Don Sundquist, first in 1995, then was elected multiple times as a Democrat. She is well known for her business litigation expertise. Her rulings touched on a variety of high-profile topics, ranging from Tennessee's death penalty to Memphis' removal of a statue of Confederate Gen. Nathan Bedford Forrest from a public park in 2017.

“Leaving close ties here at the Davidson County Courthouse is counterbalanced for me by the excitement and anticipation of what lies ahead," Lyle wrote. "There are many, many things I want to do and I have a lot planned.”