Tennessee moves vote on Confederate bust in Capitol to March 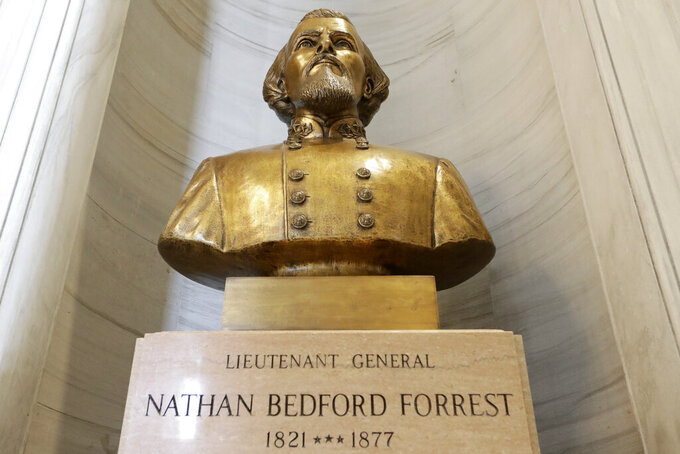 The bust of Nathan Bedford Forrest is displayed in the state capitol Wednesday, July 1, 2020, in Nashville, Tenn. Gov. Bill Lee announced Wednesday that a state panel that has the authority to help remove the bust of the former Confederate general and early leader of the Ku Klux Klan will take up the issue next week. (AP Photo/Mark Humphrey)

NASHVILLE, Tenn. (AP) — Due to severe winter weather, a Tennessee panel won’t vote until next month on whether to remove the bust of a Confederal general and early Ku Klux Klan leader from the state Capitol.

Tennessee Historical Commission spokesperson Susan McClamroch said consideration of the Nathan Bedford Forrest bust is rescheduled from Thursday and Friday until March 9. The meeting will remain mainly virtual because of the ongoing COVID-19 pandemic.

“Due to severe travel restrictions caused by the winter storm, the hearing has been continued until some of those involved including the administrative law judge, legal counsel, and key witnesses can be physically present,” commission spokesperson Susan McClamroch said.

A State Capitol Commission vote in July began the lengthy process for the proposal, which would move the busts of Forrest and Admirals David Farragut and Albert Gleaves from the Capitol to the state museum. A two-thirds vote is needed in the Historical Commission.

Republican Gov. Bill Lee, who changed positions to suggest moving Forrest’s bust to the museum, has made six recent commission appointments ahead of the meeting.

Lee spokesperson Laine Arnold said the administration is “taking it one step at a time, starting with the Historical Commission.”

The bust was unveiled in 1978, with the late Democratic Sen. Douglas Henry promoting the idea. The symbol has sparked multiple protests demanding its removal over the years. The national outcry for racial justice after the death of George Floyd and other Black people at the hands of police rekindled the push to remove Confederate symbols, including the Forrest bust.

In 2017, the State Capitol Commission voted against moving Forrest’s bust to the museum, bucking former Republican Gov. Bill Haslam's call for the move.

Forrest was a Confederate cavalry general who amassed a fortune as a plantation owner and slave trader in Memphis before the Civil War. His involvement with the Klan came after the war.