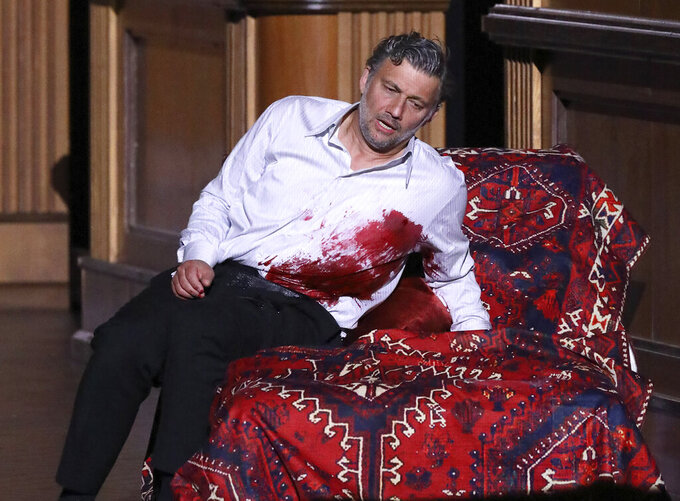 NEW YORK (AP) — Ten years ago, Jonas Kaufmann didn’t hesitate when asked if he was ready to take on heavy Wagnerian roles like the hero of “Tristan und Isolde.”

“I don’t want to get into the history books as one of the youngest Tristans ever, and who lost his voice right after,” Kaufmann, then 41, told The Associated Press. “Hopefully I’ll be able to do those things later.”

On June 29 the most sought-after tenor in opera stakes his claim to one of its most daunting roles, headlining a new production at Munich’s Bavarian State Opera directed by Krzysztof Warlikowski. There will be five performances through July 31, all sold out.

It’s the highest-profile debut imaginable, kicking off the company’s annual summer festival — the last one planned by outgoing chief Nikolaus Bachler. It also reunites him with his frequent co-star, soprano Anja Harteros, and with conductor Kirill Petrenko, who is leaving Munich for the Berlin Philharmonic.

The premiere comes just as the house has emerged from months of sporadic shutdowns due to the pandemic. Recently it has been playing to audiences of one-third the 2,100 seat capacity, and the company said it hoped to increase that to one-half for the festival.

During rehearsals, Kaufmann responded to emailed questions from AP about his new role. These are edited excerpts from that exchange.

AP: You first sang Act 2 in concert with the Boston Symphony Orchestra three years ago, but plans to sing Act 3 last year fell victim to the pandemic. Are you confident this is the right time to add a role that has a reputation as a voice killer?

AP: Many Tristans insist on substantial cuts, skipping the 11-minute section of Act 2 known as “Tag und Nacht,” and leaving out chunks of Act 3, in which the mortally wounded hero holds forth almost without pause for 40 minutes. Do you plan to sing these portions uncut?

KAUFMANN: Yes and yes. We’ll do the complete score, no cuts.

AP: What makes Act 3 so difficult? Is it the vocal demands or the dramatic intensity?

KAUFMANN: It’s mainly the length. You need some stamina to sing that! But for me, the toughest thing was to get it all in my head, all those words, pauses, all those details to remember and deliver.

AP: Your Isolde, Anja Harteros, is also singing her role for the first time. Is there a comfort that comes from your long partnership in Munich?

KAUFMANN: After having been lovers in so many operas it’s just consistent to perform “Tristan und Isolde” as well, don’t you think so? Yes, there is a special chemistry between us. Singing with her, I’ve always got the feeling that this is how it can be if you inspire one another and keep raising your level.

AP: When you were a young singer just starting out, did you imagine you would someday be singing Tristan?

KAUFMANN: Definitely not! My whole training could be summed up in the words: “Just be careful and sing quietly, otherwise you’ll ruin your voice.” At one point I thought: If this is my future, I’d better look for another job. That was at a performance of “Parsifal” at which I sang the Third Squire, a bit part if ever there was one. Around me were nothing but Wagnerian voices, and I naturally didn’t want to sound like a gnat in comparison. So I really gave it my all — and within a few phrases I was completely hoarse. I opened my mouth and all that came out was hot air. The conductor looked up at me in astonishment. For a singer, this is a nightmare, of course. Thank God, a colleague took me to the teacher to whom I basically owe everything: Michael Rhodes. He taught me how to use my own voice. When he said that I’d sing Lohengrin one day, I simply shook my head in disbelief.

AP: You recently triumphed in another of the most demanding tenor roles, the title character of Verdi’s “Otello.” How does Tristan compare to that?

KAUFMANN: Well, since opera singing is a high-performance sport, one may say that Tristan is a marathon whereas Otello is a row of sprints. Actually, in the part of Otello there’s not a single instant where you can just let go. Every bar requires utmost concentration. The emotional level that Verdi builds up is constantly high. Whereas Wagner’s timing of highlights and “zones of calmness” is completely different, of course.

AP: Which tenors of the past did you listen to while preparing Tristan?

KAUFMANN: I’ve got a lot of inspiration by listening to great singers, and Jon Vickers is one of them. Other Tristans I listened to are Lauritz Melchior, Max Lorenz, Ludwig Suthaus, Ramon Vinay, Wolfgang Windgassen and Jess Thomas. And I must say, the one who impressed me most was Suthaus in that legendary (1952) Furtwängler/Flagstad recording. That sovereignty of his singing, that calmness, that musicality, that wonderful legato!

AP: What is your next new role after this?

KAUFMANN: I’m singing Peter Grimes (the title character in Benjamin Britten’s opera) in Vienna next year. A fascinating part in every aspect, and I’m really looking forward to it.

AP: Finally, I’m sure you’re aware that the very first Tristan, Ludwig Schnorr von Carolsfeld, died just a few weeks after the work’s 1865 premiere in Munich, giving rise to the legend that the role is cursed. Is that on your mind at all?

KAUFMANN: Since I’m not superstitious, I don’t worry.