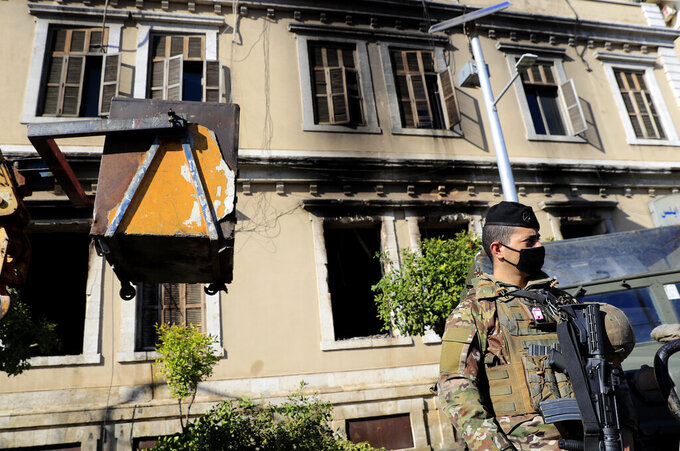 A Lebanese army soldier stand guards outside the building of Tripoli municipality that was set on fire by protesters Thursday night, during a protest against deteriorating living conditions and strict coronavirus lockdown measures, in Tripoli, Lebanon, Friday, Jan. 29, 2021. (AP Photo/Hussein Malla)

TRIPOLI, Lebanon (AP) — A tense calm prevailed in the northern Lebanese city of Tripoli on Friday after rioters set fire to several government buildings, capping days of violent clashes as anger over growing poverty made worse by the coronavirus lockdown boiled over.

The authorities deployed more troops in the country's second-largest city in an effort to quell the rioting, which has led to repeated confrontations with security forces in which one person was killed and more than 250 others were injured.

Lebanese leaders condemned the violence and demanded an investigation while accusing each other of exploiting the residents' poverty and frustration to score political points. In a worrying sign, some politicians attacked the military, accusing it of doing nothing to stop the vandalism.

“Who will protect Tripoli, if the army fails to protect it?” said Prime Minister-designate Saad Hariri said in a statement issued late Thursday. Hariri, who was tasked with forming a new government more than three months ago, described the violence as “organized crime” and blamed the military for allowing the vandalism to take place.

President Michel Aoun, who has been locked in a dispute with Hariri that has prevented the formation of a new government, demanded an investigation.

The protests in Tripoli, which started Monday, came as Lebanon grapples with both the pandemic and the worst economic crisis in its history, with only a caretaker government in charge. Tripoli is among the most impoverished and neglected cities in Lebanon, which has been in a state of economic and financial meltdown for the past year.

In Tripoli, even before the economic crisis began in late 2019, almost the entire city's workforce depended on day-to-day income. Since then, the Lebanese currency has lost around 80% of its value against the dollar, and nearly half of the country's population has been thrown into poverty.

"People are frustrated, we cannot condemn hungry, oppressed people who are not getting their minimum rights in this country. We cannot blame them for everything," said Bilal Jenzarli, a resident.

While the protests are targeting the strict lockdown measures, they also reflect the growing anger over authorities’ indifference in the face of Lebanon’s meltdown. The cash-strapped government has done little to compensate or help the impoverished cope with growing hardships, and politicians have been unable to agree on the formation of a new government since August, when the current Cabinet resigned over a massive explosion at Beirut's port.

The confluence of crises has posed the biggest threat to Lebanon’s stability since the end of its civil war in 1990.

On Thursday night, dozens of young men set fire to the historic municipal building they had been trying to storm for days. They also firebombed two other government buildings and a private university that belongs to a former prime minister, Najib Mikati.

Mikati, one of Lebanon's richest businessmen who is from Tripoli, warned of an explosion of unrest unless the military takes control of the situation.

“I may have to carry arms to protect myself and my institutions,” he said.