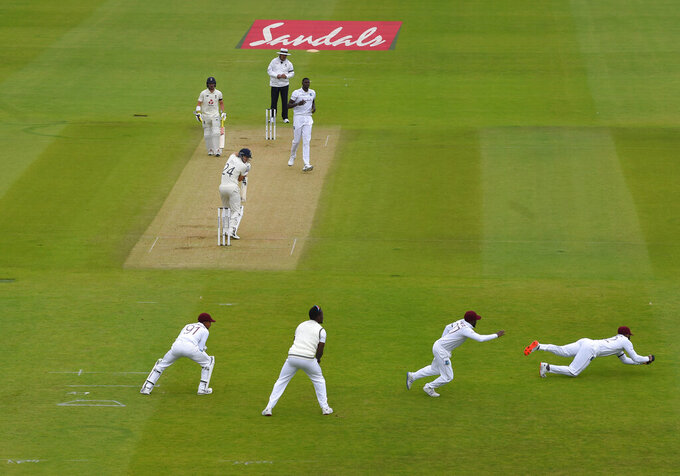 England's Joe Denly, center, bats during the first day of the 1st cricket Test match between England and West Indies, at the Ageas Bowl in Southampton, England, Wednesday July 8, 2020. (Mike Hewitt/Pool via AP)

SOUTHAMPTON, England (AP) — International cricket returned Wednesday after a four-month absence with England and the West Indies managing just 82 minutes of play in a rain-hit opening day of the first test that started with players taking a knee in support of the Black Lives Matter movement.

England was 35-1 at stumps having faced only 17.4 overs because of light but intermittent rain at Southampton's Rose Bowl, where there were no spectators for a match being played in an isolated environment because of the coronavirus pandemic.

Rory Burns was 20 not out and Joe Denly was unbeaten on 14, with Dom Sibley the man out bowled by Shannon Gabriel off the 10th delivery of the day.

Moments before the first ball was bowled, West Indies' fielding players knelt in the outfield while their England counterparts did the same around the boundary edge in support a movement that has grown since the killing of George Floyd in the United States in May. A Black Lives Matter logo also was on the collar of the test shirts worn by players from both teams.

The kneeling gesture has been made before Premier League matches since the resumption of soccer in England last month.

“It was a great moment," Gabriel said, "showing something we stand for and that racism has no part in cricket.”

England assistant coach Graham Thorpe said the team felt it was important to show solidarity with the West Indies players.

“We don’t want racism in our game and we want a fair and equal society for our children," Thorpe said. "It was absolutely right to do it. You felt a part of something which was very important.”

There was a minute's silence in honor of those who died in the coronavirus pandemic and also West Indies great Everton Weekes, who died last week.

Play started after a three-hour delay because of light rain and a wet outfield, and only lasted for three overs before the teams had to go back inside because of another shower. By then, Sibley had seen his off stump knocked back following a poorly judged leave of a ball that angled in.

After that, the players went off for rain three times, and there was no play possible after 4:28 p.m. local time (1528 GMT).

“It’s been a bit tough, coming off and on," said Gabriel, who had figures of 1-19 off five overs. "We just have to keep switched on when we come back on. It’s been a tough day but we’ve been doing well so far.”

Ben Stokes, England's stand-in captain because Joe Root was absent because of the birth of his second child, won the toss and opted to bat under overcast skies. Captain for the first time, Stokes made a big call in leaving out fast bowler Stuart Broad — a long-time regular in the team.

Jofra Archer, Mark Wood and James Anderson will make up England's pace attack along with Stokes.

After the toss was made, Stokes briefly forget about social distancing when he went to shake the hand of Holder. Holder move his hand away and both allrounders laughed.