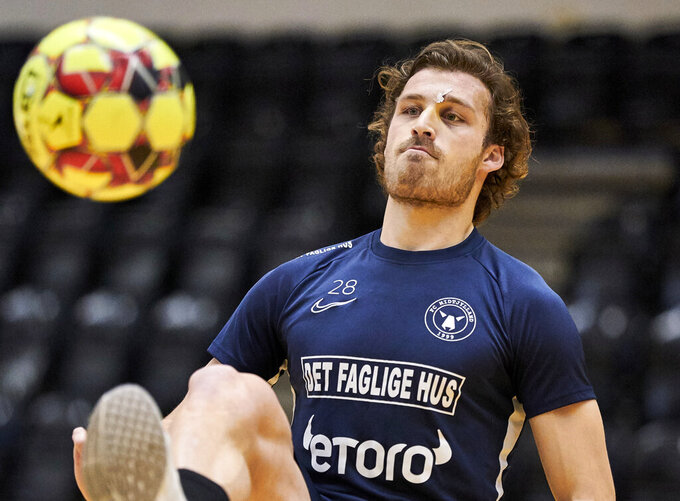 FILE - In this Dec. 11, 2019 file photo, Erik Sviatchenko participates in training in Ikast, Denmark. Denmark will be one of the first countries in European soccer to resume league play after the virus outbreak. Games are slated to be played from May 28 with hopes of finishing the season by the end of July. That's great news for FC Midtjylland because the club from central Denmark was leading the league by 12 points and closing in on its third league title in six seasons. Midtjylland captain Erik Sviatchenko says soccer returning will boost the morale of the nation. (Claus Bonnerup/Ritzau Scanpix via AP)

As one half of a soccer-playing couple in Denmark, Erik Sviatchenko never imagined having eight straight weekends free during a season to spend with his wife, Anne, and their two kids.

“We have become much closer,” Sviatchenko says of his family, “having been able to have more quality time together.”

Indeed, the captain and center back of Danish league leader FC Midtjylland has found himself in reflective mood amid the general gloom of being in lockdown during the coronavirus pandemic. He is trying to take some positives from a troubling situation.

Like being unshackled from the gruelling churn of competition. “That pressure of being watched,” as he describes it.

“It has been quite healthy,” Sviatchenko, a Denmark international like his recently retired wife, said in a phone interview, “to have a period in a non-performing state of mind.”

That’s about to change.

Denmark will on May 28 be one of the first European leagues to resume play after the virus outbreak, a natural step as society reopens in this Scandinavian country where 527 known people have died from COVID-19.

It’s great news for Sviatchenko and his team, which leads the Superliga by 12 points and is the big favorite to capture what would be its third league title in the past six seasons. That would mean a chance to qualify for the Champions League group stage, and all the riches that brings.

Being denied this opportunity would have been a cruel blow, though Midtjylland still has work to do. There are two games remaining in the regular season before the league splits and the top six take part in a playoff tournament over 10 rounds.

“It's nice to finish off the season in the right way instead of calling the league canceled, or calling it off so it ends as the league stands now,” Sviatchenko said.

“It’s good to be able to play the games to the end, but I know that it will be different because there are no fans.”

Midtjylland is attempting to do something about that.

While many teams across Europe are fearful of supporters gathering outside their stadiums during matches, given the social restrictions still in place during the pandemic, Midtjylland is thinking differently.

The club from central Denmark has installed giant screens in the parking lot of its MCH Arena to allow at least 2,000 fans to watch matches from their cars. Footage of the car park is set to be screened inside the arena.

“We will be able to somewhat hear them outside,” Sviatchenko said of the “drive-in” plan. “Because I can tell you, a stadium without any fans, playing football 11 vs. 11, that is a quiet place to be.”

The relatively early resumption of play was important for Denmark, which is one of the leagues with the most rounds still to play in Europe.

Claus Thomsen, chief executive of the Superliga, told The Associated Press that being one of the first leagues to restart might be a “minor financial benefit” in terms of exposure. Also significant, Thomsen said, would be highlighting the “professionalism” of the Danish league by showing it is “capable of managing and setting out an operation, and completing it.”

And it will be an operation.

Like other countries, Denmark is being rigorous in testing and assessing the health of players as they get back on the field.

Up until competition resumes, players and coaches must follow strict guidelines from health authorities in order to attend training sessions. That includes sending a photo to the club doctor each morning with proof of their temperature, filling in a self-assessment health form, travelling to training alone and in your uniform, having individually served food portions, and using hand sanitizers before and after training. There's no access to locker rooms.

When the league resumes, players and coaches will be tested for COVID-19 before games and at least once a week, Thomsen said.

“It is not a small expense for clubs of the size in the Danish league,” he said. “It is an expense we will carry.”

The 28-year-old Sviatchenko said despite all of the testing and checks in place, he would sympathize with players who don’t want to return yet.

“I would never force any of my teammates to play,” he said. “If they feel insecure, have a pregnant wife at home — which some of them have — then of course they will not be playing. We will never be looking at them as not part of the team.”

Midtjylland resumes its campaign with a home match against AC Horsens on June 1, and Sviatchenko is sure having soccer back on TV screens will be a boost to the nation.

“People have their identities tied up in clubs, in football. For some fans, their lives revolve around football,” he said. “So of course you can say some of the morale is going to be lifted when football returns.”