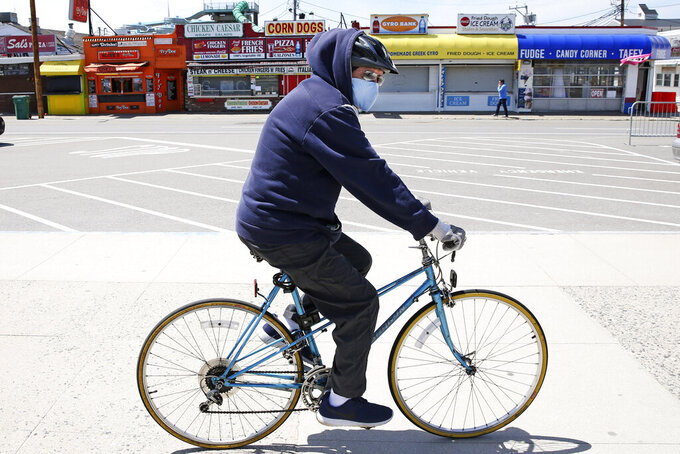 A man wearing a protective mask and gloves cycles past the Boardwalk across from the Hampton Beach State Park in Hampton, N.H., Tuesday, May 19, 2020. Beaches in New Hampshire have been closed since March by state order due to the COVID-19 virus outbreak. (AP Photo/Charles Krupa)

CONCORD, N.H. (AP) — New Hampshire continues to expand testing for the coronavirus, and while movie theaters and bowling alleys plan for reopening.

New Hampshire is adding new coronavirus testing sites while taking away some of the eligibility restrictions.

Currently, anyone with at least one symptom can get tested, as can asymptomatic health care workers, those over age 60 and people with underlying health conditions. Starting next week, that group will be expanded to include child care workers and those living in the same household with members of the vulnerable populations, said Health and Human Services Commissioner Lori Shibinette.

Meanwhile, New Hampshire health clinics are getting nearly $700,000 to expand testing in rural communities. Fourteen clinics in New Hampshire will receive the funding from the federal Department of Health and Human Services.

As of Wednesday, 3,868 people in New Hampshire had tested positive for the virus, an increase of 149 from the previous day. A third of new cases were residents and staff at the Villa Crest nursing home in Manchester, and most of them had no symptoms, health officials said. Eight new deaths were announced, bringing the total to 190.

Families could enjoy movies surrounded by a ring of empty seats under a proposal from the company that operates several Cinemagic theaters in New Hampshire, Maine and Massachusetts.

Patrick Collins, director of operations for Zyacorp, told the Economic Reopening Task Force on Wednesday that theaters across the country are hoping to reopen in late June or early July, with extensive hygiene and personal distancing measures. That would include assigning seats using an algorithm that would create space around each small group of moviegoers, he said.

The task force also heard from Andrew Maderios, president New Hampshire Candlepin Bowling Association. He outlined a plan that includes having groups bowl in every other lane, with no more than five people at each lane.

The Executive Council on Wednesday approved all state spending for the next month after delaying the vote over concerns about the governor's response to the coronavirus pandemic.

The council voted 5-0 to approve a request from the state treasurer to spend money for all functions of state government for June. It typically does so without debate, but voted to table the request two weeks ago because members wanted more information about money being spent on responding to the pandemic.

Sununu had sent councilors 250-page packages with details of the spending proposal, and councilors questioned him Wednesday about money set aside for businesses, education, airports, child care, and other groups.