Tevez leaves Boca Juniors to rest; no talk of retirement 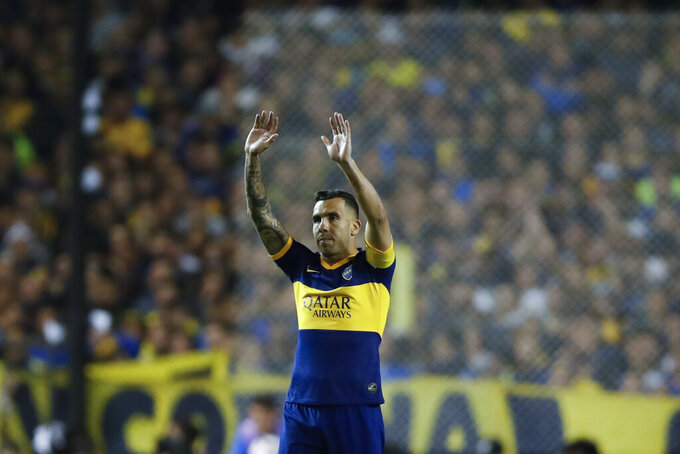 BUENOS AIRES (AP) — Veteran striker and captain Carlos Tevez announced Friday he is leaving Boca Juniors, triggering a clause in his contract that allows him to become a free agent on June 30.

“It is not goodbye, it is see you soon,” the 37-year-old Tevez told a news conference at the La Bombonera stadium. He said he'll remain a club fan and “the Carlitos of the people.” He did not talk about retirement.

Tevez lifted 11 trophies for Boca, including the Copa Libertadores and Intercontinental Cup in 2003. His last title in the blue and yellow jersey was the Copa Maradona in January.

He made his debut with Boca at age 17 in 2001. Three years later he was transferred to Brazil’s Corinthians, then West Ham, Manchester United, Manchester City, Juventus and China’s Shanghai Shenshua.

The veteran striker leaves after Boca lost on penalties to Racing in the Argentinian league cup semifinals.

“I have nothing else to give. As a player I gave my all, so I am happy,” Tevez said, adding that the death of his father from COVID-19 earlier this year is affecting him. “Boca always needed me at 120%, mentally I am not ready to give that."

“I always said the last club I would play for in this country would be Boca,” he said. “I don't know what I will do in my life — now I want to rest and be with my family.”

Boca president Jorge Amor Ameal, who was also present at the news conference, said he wants Tevez to work at the club.

He scored 94 goals for Boca, the last against Brazil's Santos in the Copa Libertadores group stage this year. He is one of the top 10 goal scorers in Boca history.