Texas governor rules out another shutdown as virus surges 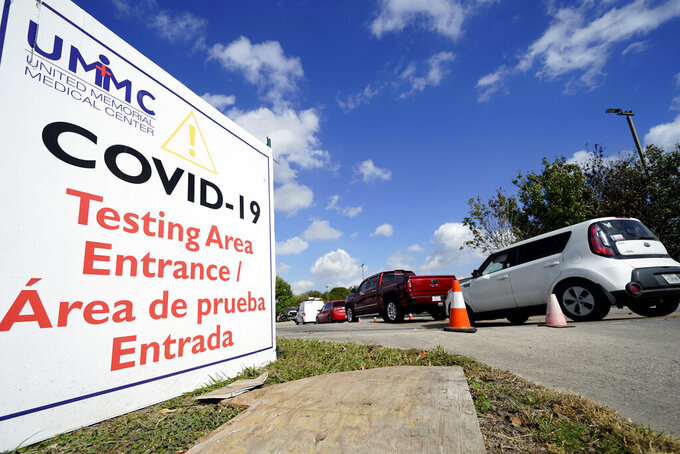 His rejection of a shutdown comes as other governors across the U.S. take aggressive new steps to curb record-shattering spikes in COVID-19 cases that are pushing hospitals to the limit. Texas is on the verge of surpassing 8,000 hospitalized COVID-19 patients for the first time since a deadly summer outbreak, which back then Abbott met with orders that closed bars and limited restaurant occupancy.

But during a visit to hard-hit Lubbock, where the local health authority says the fire department is building shelves for the dead as morgues run short on space, Abbott made clear Texas will not retreat to lockdown measures again.

“It is important for everybody in the state to know that, statewide, we're not going to have another shutdown,” Abbott said. “There's an overestimation of exactly what a shutdown will achieve.”

He focused instead on the arrival of a new antibody drug similar to a treatment President Donald Trump received after contracting the virus last month. But supply of the drug, called bamlanivimab, is scarce for now. The largest hospital in the Rio Grande Valley, DHR Health, had 38 doses that it could begin administering soon as Friday, said Dr. Sohail Rao, president and CEO of DHR Health Institute for Research & Development.

The therapy is only approved for people 12 and older with mild or moderate COVID-19 not requiring hospitalization, and who are at higher risk of severe illness from the virus, including people who are diabetic or obese. Texas received about 5,700 vials of the drug, second only to Illinois.

“We are quite enthusiastic that we have this antibody,” Rao said. “But what will be a limiting factor is the number of doses released by the state, which also depends on how much they get from the federal government."

In closing the door on more shutdowns, Abbott said the virus is spreading in social settings beyond businesses. He also singled out El Paso — where Texas has rushed more than 1,200 additional medical personnel, and 10 mobile morgues are in place to handle the dead — suggesting county leaders on the border aren't enforcing existing restrictions as they try shutting down gyms and tattoo parlors.

Texas has had a statewide mask mandate since July, and restaurants and businesses continue to operate under reduced occupancy. But even Texas' largest cities say their ranks of code enforcement staff is limited, and some Texas sheriffs have similarly balked at enforcing mask orders, saying they lack enough deputies to do so. Abbott has also received blowback from his own party over virus restrictions, including Texas GOP Chairman Allen West, the firebrand former Florida congressman, who led a protest outside the governor's mansion last month.

Democrats blasted Abbott for not doing more and pointed out that the news conference was his first about the virus since September.

“It didn’t have to be this way. The governor’s decision to wield absolute power in response to this crisis has failed," said state Rep. Chris Turner, the Democratic leader in the Texas House. "The governor should get out of the way and let local leaders take measures to protect their communities.”

El Paso police say they have issued more than 80 citations and 30 warnings the past two weeks over COVID-19 compliance. A person cited for not wearing a mask can face a $250 fine on the second violation.

Texas has seen more than 20,300 virus deaths to date, the second-most in the nation, according to researchers from Johns Hopkins University. Over the past two weeks, the rolling average number of daily new cases has increased by more than 3,035, an increase of 44%.

Among the new cases is Fort Worth Mayor Betsy Price, a 71-year-old Republican who tested positive Wednesday. She was quarantining with her husband, who was diagnosed with the disease earlier in the week.