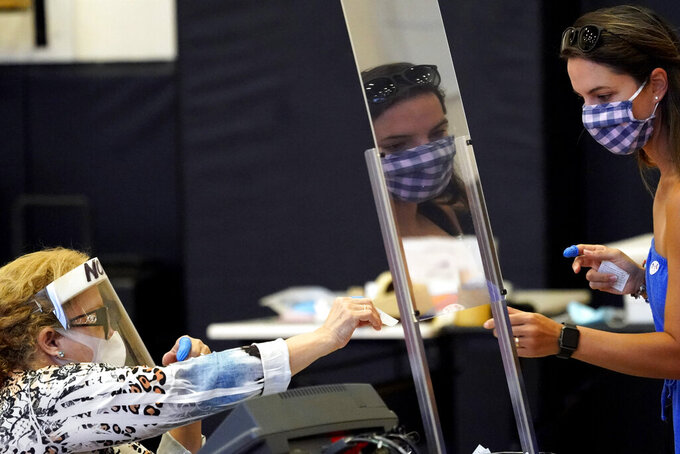 The decision by the all-Republican court is the latest defeat in a string of losses for Democrats whose efforts to change Texas voting laws during the coronavirus pandemic have largely failed.

Polls show unusually tight races this year in America's biggest red state, intensifying battles over voting access. Texas is one of just five states not allowing widespread mail-in voting this year. Republican Gov. Greg Abbott has resisted calls to expand eligibility and courts have sided with GOP leaders who say fear of catching COVID-19 doesn't qualify voters for mail-in ballots. Last week, Abbott was sued after he barred Texas’ 254 counties from operating more than one drop-off box each for absentee ballots. Harris County and other Democratic-led counties have had to close dozens of drop-off locations as a result.

Mail voting in Texas is generally limited to voters who are 65 years old or older, or who have a disability.

In the ruling, the justices sidestepped the issue of whether mail-in voting was safer in the pandemic, ruling instead that current Texas law wouldn't allow Harris County to send mass ballot applications.

“We, of course, take no side in these policy debates, which we leave to legislators and others,” the court wrote in its order. "The question before us is not whether voting by mail is good policy or not, but what policy the Legislature has enacted. It is purely a question of law."

The case is among several significant battles over voting in Texas that are still playing out in courts with four weeks until Nov. 3. An appeals court reversed a federal judge's decision to reinstate straight-ticket voting in Texas, and Abbott had faced a lawsuit from within his own party over his decision to extend early voting by six days.

The weekslong battle over whether mail-in ballot applications can be proactively sent to every registered voter in Texas' most populous county has not appeared to dampen interest in the option. More than 200,000 voters around Houston have already requested a mail-in ballot, roughly double the number in a typical presidential election year, said Susan Hays, an attorney for Harris County.

Houston is a stronghold for Democrats, but the surrounding county still includes GOP-held seats that are helping keep Republicans in power in Texas. Democrats are most energized by their chances of winning a majority in the Texas House for the first time in 20 years, needing to flip just nine seats to take over the chamber.

Harris County officials are implementing a $27 million plan to expand voting access by tripling the number of early voting centers — including seven that will be open 24 hours for an entire day — and adding more polling locations on Election Day. Like other cities with NBA teams, the Houston Rockets' home arena, the Toyota Center, will also be used as a polling location.