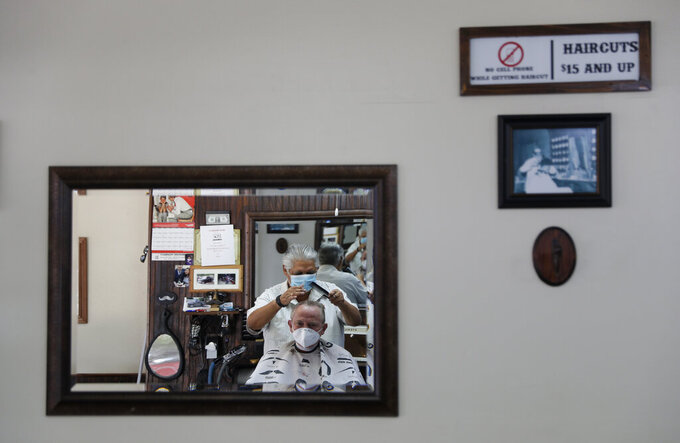 Barber Rudy Soliz gives Brian Barnett a haircut at the San Marcos Barber Shop in San Marcos, Texas, Thursday, May 21, 2020. Businesses in Texas closed due to the COVID-19 pandemic continue to open in phases; bars are permitted to open Friday. (AP Photo/Eric Gay)

AUSTIN, Texas (AP) — A Texas Supreme Court justice said Thursday that she and her husband have tested positive for COVID-19 after going to a drive-through testing center with symptoms including body aches and fevers.

Justice Debra Lehrmann tweeted that she and her husband, Greg, tested positive for the disease caused by the coronavirus. She told the Dallas Morning News that they went to the Austin center last week after noticing symptoms.

Lehrmann is the highest-ranking state official known to have tested positive. She said her health has not interfered with her job because the state Supreme Court is working remotely.

She said the couple have “strictly adhered” to stay-at-home orders since early March, cooking all their meals at home and wearing masks and gloves to the grocery story. They did get visits from family, which included an infant grandson.

"We were just extremely careful, and then we get it,” Lehrman told The Morning News. “How in the world would that happen? We have no idea. All I know is it must be very contagious.”

Antibody tests show a past infection, while viral tests show an active infections. According to data released Thursday, of the 800,433 tests overall in Texas, at least 49,300 were antibody tests.

Travelers from those areas had been required to self-quarantine for two weeks.

State lawmakers are raising questions about a $295 million contract awarded to a little-known Frisco company to track down Texans potentially infected with the coronavirus.

MTX Group Inc. beat out 10 mostly big-name corporations, such as IBM, AT&T Global Business Services and Accenture LLP for the 27-month contract to manage a state-led effort for contact tracing. Paid for with federal month, the projects seeks to find and monitor people who have been exposed to those infected with the virus, according to a copy of the contract obtained by The Dallas Morning News.

MTX Group will be expected to create a virtual call center by the end of May and eventually hire, train and staff it with as many as 1,000 contractors. It will also work with up to 4,000 others hired by state and local health departments, universities and nonprofit groups.

MTX Group already has a web-based tool it developed this year for COVID-19 contact tracing that has been deployed in several states.

Some legislators feel they should have received advance notice that so large a contract was awarded two days after it was formally put out to bid. Sen. John Whitmire, a Houston Democrat and the state's longest-serving senator, said contact tracing has “got to be done right.”

“It’s a relatively new company, so it’s actually hard to do your due diligence on a company that just kind of showed up and got a contract of this magnitude.” Whitmire said.

Sherry Sylvester, a spokeswoman for Republican Lt. Gov. Dan Patrick, said the Department of State Health Services “did not review this issue with our office or the Senate. We are looking into it now.”

And agency spokesman said the company had “the best bid and the best cost.”