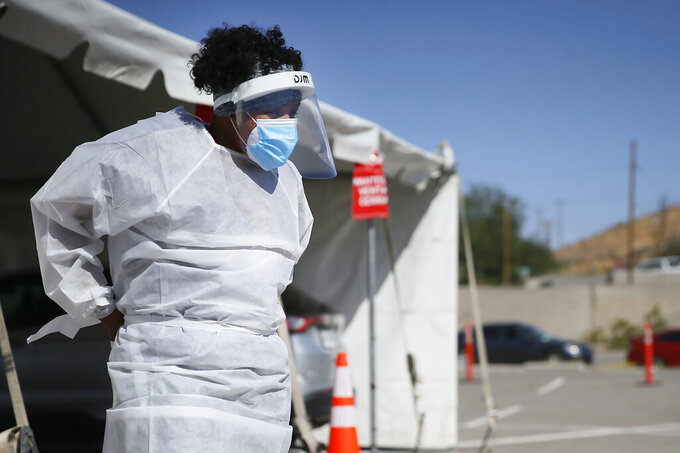 FILE - In this Oct. 26,2020, file photo, a medical worker stands at a COVID-19 state drive-thru testing site at UTEP, in El Paso, Texas. The U.S. has recorded about 10.3 million confirmed infections, with new cases soaring to all-time highs of well over 120,000 per day over the past week. (Briana Sanchez/The El Paso Times via AP, File)

That is the second-highest death count overall in the U.S., trailing only New York, according to researchers from Johns Hopkins University. It's the 22nd-highest per capita at 69.7 deaths per 100,000 people.

So far, Texas leaders have given no indication of forthcoming restrictions to keep people from gathering and spreading the virus. Instead, Republican Gov. Greg Abbott in recent days has been emphasizing that new therapeutics and vaccines are expected to become available soon.

A state appeals court last week sided with Texas Attorney General Ken Paxton and lifted a local shutdown order in El Paso, where mobile morgues are being trucked in to help overwhelmed hospitals and funeral homes.

According to Acosta, between four and eight participants of the detention facility's trusty program have volunteered daily since Nov. 9. She said they are accompanied by a sheriff's deputy and two detention officers and are provided with personal protective equipment. The volunteers are minimum custody inmates with misdemeanor offenses, Acosta said, and their volunteer service is temporary “since we are waiting for the National Guard to take over.”

Texas also became America’s first state to record more than 1 million confirmed COVID-19 cases last week. It also recently surpassed California, the most populous state, in recording the highest number of positive coronavirus tests. The true number of infections is likely higher because many people haven’t been tested, and studies suggest people can be infected and not feel sick.

During the summer, people with COVID-19 overwhelmed hospitals in Houston and in the Rio Grande Valley, along the border with Mexico. But in the fall case numbers dipped, and Abbott began relaxing some coronavirus restrictions, allowing restaurants and gyms to let more people inside. He also let county leaders decide if they wanted to reopen bars at 50% capacity.

Since then, the virus has spread.

Over the past two weeks, the rolling average number of daily new cases has increased by 3,430.4, an increase of 53.6%.

Texas now ranks 31st in the country for new cases per capita, with 428.3 new cases per 100,000 people over the past two weeks. One in every 417 people in Texas tested positive in the past week.

Meanwhile, the U.S. Supreme Court said Monday that the Texas Department of Criminal Justice had substantially met the demands of inmates at a Houston area facility for safety equipment. The court agreed with a federal appeals court, which previously cancelled a federal judge’s April order for TDCJ to provide inmates with hand sanitizer, masks and unrestricted access to soap. Justices Sonia Sotomayor and Elena Kagan dissented.