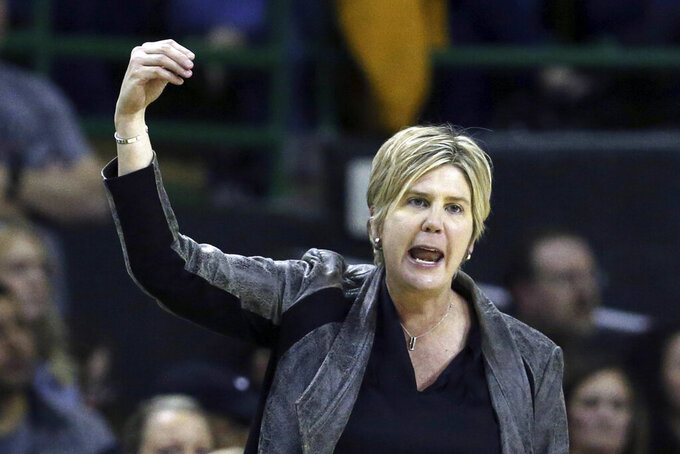 FILE - In this Jan. 25, 2020, file photo, Texas Tech head coach Marlene Stollings reacts to a play in the second half of an NCAA college basketball game against Baylor in Waco Texas. Texas Tech women's basketball players have accused Stollings and her staff of fostering a culture of abuse that led to an exodus from the program, according to a report published Wednesday, Aug. 5, 2020, in USA Today. (AP Photo/Rod Aydelotte, File)

Stollings was fired Thursday, a day after a scathing newspaper report alleging a culture of abuse in her program. Hocutt said Friday that the school had already conducted an in-depth review of the coach's two seasons with the program before that report.

“We have failed them and we have to do better. They are strong. And I appreciate the strength and the courage that they have displayed," Hocutt said about the players.

Hocutt said Stollings' contract was terminated “with cause based on objectionable behavior.” That distinction would relieve Texas Tech from financial obligations for the final four seasons remaining on the deal.

Players made claims of abuse over the past two years in season-ending exit interviews that were obtained through an open records request by The Intercollegiate, an investigative media outlet for college sports. The details were published by USA Today.

That report indicated that players dreaded a heart monitoring system they said was misused in punitive ways, had to endure demeaning and threatening comments and were subject to sexually suggestive behavior from a strength coach who has since resigned.

Hocutt met with players Wednesday and Thursday, and realized “how deep the trust had been broken." He then informed Stollings of her termination.

“At the center of of everything, it was just the lack of trust and of genuine relationships that existed, or did not exist,” Hocutt said. “This wasn’t a basketball-related matter, and the team made certain of that. From an X’s and O’s standpoint and competitive standpoint on the court, we’re very proud of what they’ve achieved.”

Hocutt said a small group of players visited after the 2018-19 season, Stollings' first at Tech, with senior women's administrator Judi Henry with some concerns about things they had witnessed in the program. There were also comments on season-ending surveys that the AD said “were not aligned with our expectations," and led to Hocutt and Henry meeting separately with the coach.

While there were indications after those initial meetings that things had improved, Hocutt said as last season progressed there were indications “that things were not where we had hoped for them to be or where we had expected them to be.” The AD said he started visiting the locker room after home games, attending practices when he could and determined that an in-depth review of the program would be necessary after the season.

Hocutt said he was made aware of the Title IX complaint against strength coach Ralph Petrella on March 25. Petrella, who through his attorney denied allegations that he sometimes threatened players with violence and made sexually suggestive remarks, resigned within two days after that.

The coronavirus pandemic that abruptly ended the season also delayed the start of the review into the program until early April, and extended through the month of June before Hocutt got a verbal report.

After sitting down with Stollings in early July to discuss the findings “as well as a possible pathway forward,” the final part of the review was meeting with the team. A team meeting was scheduled July 29, but was pushed back a week at the coach's request because one of the players was having surgery that day.

Over two years, 12 of 21 players left the program, including seven recruited under Stollings, according to the USA Today report. The coach defended her program in a statement to the newspaper.

Stollings previously turned around the programs at Minnesota and VCU and has done the same with the Red Raiders, a once-proud program that has fallen on hard times. Texas Tech finished 18-11 in Stollings’ second season after going 7-23 the year before she arrived.