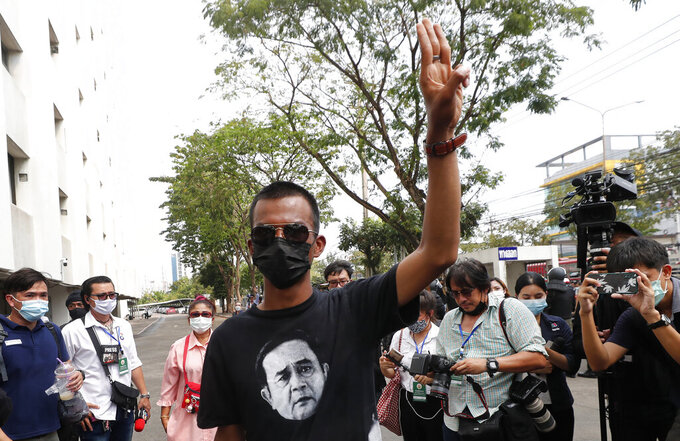 In this Monday, March 8, 2021, photo, pro-democracy activist Panupong Jadnok raises a three-finger symbol of resistance as he arrived at the Attorney General's office in Bangkok, Thailand. A court in Thailand on Tuesday agreed to release Panupong, one of two key leaders of the anti-government protest movement, on bail on the condition that he refrains from activities deemed to defame the monarchy. Panupong must also wear electronic tags and is banned from leaving the country. (AP Photo/Sakchai Lalit)

BANGKOK (AP) — A court in Thailand on Tuesday agreed to release on bail two key leaders of the anti-government protest movement on condition that they refrain from activities deemed to defame the monarchy.

Arnon Nampha and Panupong Jadnok must also wear electronic tracking tags and are banned from leaving the country.

Arnon and Panupong are prominent figures in a pro-democracy movement that began last year. In addition to challenging the government of Prime Minister Prayuth Chan-ocha, the rallies they led demanded reform of the monarchy to make it more transparent and accountable.

They have been held in pre-trial detention under the country’s tough lese majeste law which protects the monarchy from criticism, but which has been increasingly used to target government opponents. The law carries a penalty of up to 15 years in prison on each count.

Several previous applications for bail by the activists were denied.

During their detention, both contracted COVID-19 and were sent to the prison hospital for treatment. They have now tested negative, according to their lawyer, Krisadang Nutcharas, and were expected to obtain their release documents later Tuesday.

Thailand’s prisons have become hotspots for the coronavirus. The Department of Corrections has discovered 26,330 cases, around 9% of total prisoners in Thailand, over the past two months.

A third protester held on lese majeste charges, Chukiat Sangwong, was also granted bail on Tuesday but will remain in detention because he is facing similar charges in two other courts, Krisadang said.

He was charged after allegedly writing critical messages on a portrait of the king in front of the Supreme Court during an anti-government rally in March.

According to the group Thai Lawyers for Human Rights, 97 activists including eight minors are facing lese majeste charges after the government late last year stepped up its legal offensive against protesters.