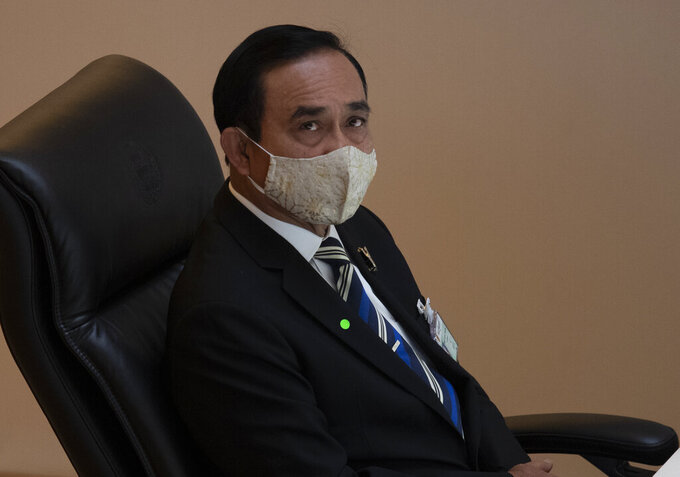 In this Wednesday, May 27, 2020 photo, Thailand Prime Minister Prayuth Chan-ocha wears a face mask to help curb the spread of the coronavirus as he attends an open session at the parliament house in Bangkok, Thailand. Thailand's prime minister has warned his fellow citizens that their nation has handled the health challenges of the coronavirus well, but must pull together to overcome the tremendous damage done to the economy by the pandemic. (AP Photo/Sakchai Lalit)

BANGKOK (AP) — Thailand’s prime minister, facing growing demands from students for change, warned Thursday that the nation must pull together to overcome the economic damage caused by the coronavirus pandemic.

In a speech marking the appointment of a new team of financial specialists to his Cabinet, Prayuth Chan-ocha said the economic crisis will not go away quickly.

Thailand has been praised for its handling of the health effects of the coronavirus, with no local cases reported for 80 days. But it has suffered an especially strong shock to its economy because of its heavy dependence on tourism and exports.

Prayuth’s speech comes at a time of growing political pressure, as a student-led protest movement issues increasingly strident calls for his government to step down, the military-installed constitution to be revised, and limits to free speech to be lifted to promote democracy.

Some of the protesters' criticisms challenge aspects of the country’s constitutional monarchy, setting them at odds with the conservative political establishment led by royalists and the military.

Prayuth, as army commander, led a coup in 2014 that ousted an elected government, served as prime minister in the military regime that followed, and returned as prime minister after a general election last year that was widely seen as free but not fair.

He declared Thursday that "our future is in the hands of the young,” but pushed aside the demands of the mainly young protesters at frequent rallies around the country.

“Right now, we must focus on the economic survival of tens of millions,” he said. “Let’s get the economy going first, first get that done by working together, and we can look to fixing the other issues, collaboratively, later.”

He also referred to the political conflict that has afflicted the country for much of the past decade and a half, including street clashes and two military coups.

“The politics of division that rejects a united approach to solving problems belongs to another era in history,” he said.

Prayuth said he appointed experts rather than politicians to the Cabinet to manage financial policy because “the economy is as big a threat to our lives as is the health threat.”

The Asian Development Bank recently forecast that the economy will contract by 6.5% in 2020, compared to its December 2019 projection of 3.0% growth.