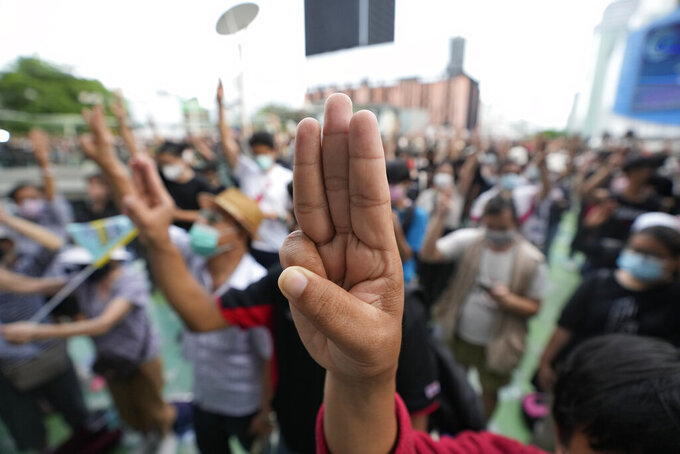 Pro-democracy supporters display the three-finger symbol of resistance during a demonstration in Bangkok, Thailand, Thursday, June 24, 2021. Pro-democracy protesters have taken to the streets of Thailand's capital, marking the 89th anniversary of the overthrow of the country's absolute monarchy by renewing their demands that the government step down, the constitution be amended and the monarchy become more accountable. (AP Photo/Sakchai Lalit)

BANGKOK (AP) — Pro-democracy protesters took to the streets of Thailand's capital on Thursday, marking the anniversary of the overthrow of the country's absolute monarchy by renewing their demands that the government step down, the constitution be amended and the monarchy become more accountable.

The protesters defied a ban on large gatherings instituted to fight a coronavirus surge that shows little sign of abating. It was their first large protest after a hiatus of about three months caused by the pandemic and the jailing of protest leaders, who have since been released on bail.

The government of Prime Minister Prayuth Chan-ocha is facing widespread criticism that it botched pandemic recovery plans by failing to secure adequate vaccine supplies. It also has been blamed for the economic slump caused largely by measures to contain the pandemic.

On June 24, 1932, a group of progressive army officers and civil servants proclaimed constitutional rule and the transition to parliamentary democracy, ending Thailand's absolute monarchy. The anniversary in recent years has become an occasion for pro-democracy rallies.

Protesters gathered early Thursday by Bangkok’s Democracy Monument, a traditional demonstration venue, to light candles and read out the 1932 proclamation of the end of the absolute monarchy.

Several hundred then marched to Parliament, where protest leaders submitted a letter stating their concerns. Lawmakers were voting Thursday night on several proposed constitutional amendments that fell far short of those sought by the protesters, which include restoring more power to political parties and elected office holders.

“We come out today to insist on the principle that the constitution must come from the people,” said Jatupat Boonpattararaksa, a protest leader also known as Pai Dao Din.

About 500 demonstrators regrouped in the evening at an elevated walkway near shopping malls in central Bangkok, where they listened to speeches before dispersing peacefully shortly after 8 p.m.

The student-led pro-democracy movement sprung up last year, largely in reaction to the continuing influence of the military in government and hyper-royalist sentiment. The army in 2014 overthrew an elected government, and Prayuth, the coup leader, was named prime minister after a 2019 general election put in power a military-backed political party. Critics say the constitution enacted during military rule skewed election rules to favor the army’s proxy party.

The movement was able to attract crowds of as many as 20,000-30,000 people in Bangkok in 2020 and had followings in major cities and universities. However, a coronavirus surge late last year caused it to temporarily suspend activities and lose momentum.

The movement became controversial as its leaders focused on the monarchy in their speeches and activities. They charged that the king holds power and influence beyond that allowed under the constitution.

Since becoming king in 2016, Maha Vajiralongkorn has gained more direct control over the vast fortune of the royal palace — estimated to exceed $30 billion — as well as command of some key military units in the capital.

During the same time, memorials, statues and other symbols associated with the 1932 revolution have been removed.

The monarchy is widely considered to be an untouchable bedrock element of Thai nationalism. Defaming key royals is punishable under a lese majeste law by up to 15 years in prison per count. Many people still revere the monarchy, and the military, a major power in Thai society, considers its defense a key priority.

The government responded to the protesters' criticism of the monarchy by charging leaders under the lese majeste law.

Parit Chiwarak, among those jailed, said Thursday the protesters are standing by their original demands.

“The discussion of reforms, including the monarchy, must be continued because if we stop demanding, we will never get it,” said Parit, who is better known by the nickname Penguin. “But as long as Prime Minister Prayuth Chan-ocha remains prime minister, the amendment of the constitution remains impossible. As long as Prayuth Chan-ocha remains prime minister, reform of the monarchy remains impossible.”

A separate protest Thursday targeted Prayuth specifically, uniting one-time supporters and opponents of the military. Nitithorn Lamlua, an ardent royalist who was a leader of 2014 protests against the elected government of Yingluck Shinawatra that led to then-army commander Prayuth staging a coup and seizing power, gathered a few dozen supporters outside the prime minister's office at Government House to demand his resignation.

Another slightly larger group sought to join them but was turned back by police after minor pushing and shoving. It was led by Jatuporn Prompan, a former lawmaker who was a leader of the “Red Shirt” group that was politically allied with the government the army ousted in 2014.

“Getting Prayuth ousted is a common demand of all groups. If Prayuth is still in power, it is impossible to accomplish other demands,” Jatuporn said. "We don’t care who will be the next prime minister, but Prayuth must get out. The only condition for the next prime minister is that the person must be capable enough to solve the current problems.”