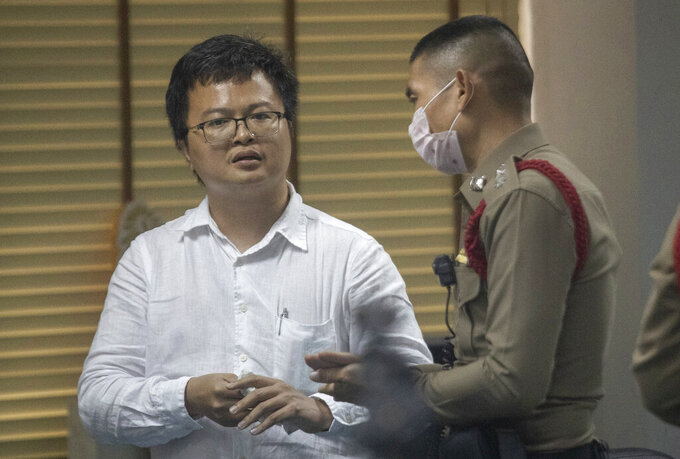 Pro-democracy activist and human rights lawyer Arnon Nampha talks to police at a police station, Friday, Aug, 7, 2020, in Bangkok, Thailand. The government cracked down on Friday with the arrests of some high profile members of the pro-democracy movement. Among them was Arnon, who was arrested on charges of sedition and defying an emergency decree the government instituted months ago to try to control the spread of the coronavirus. (AP Photo/Sakchai Lalit)

BANGKOK (AP) — Political tensions are rising in Thailand as pro-democracy activists vowed Friday to step up protests against the government and police arrested some key figures in recent demonstrations.

Protest leaders warned that they will expand their activities if the government fails to meet their demands, which include dissolving Parliament, holding new elections and changing the constitution.

Recent pro-democracy demonstrations, mostly led by students, have been modest in size but have spread widely and quickly, unnerving the government. Army commander Gen. Apirat Kongsompong — a political strongman in a country where coups have toppled many governments — indirectly but harshly criticized the protesters this week.

“COVID-19 can be cured ... but the disease that cannot be cured is the hatred of the nation,” he said in a speech to military academy cadets.

The government cracked down on Friday with the arrests of some high-profile members of the pro-democracy movement. Among them was human rights lawyer Arnon Nampha, who was arrested on charges of sedition and defying an emergency decree imposed to control the coronavirus. Critics charge the decree is being wielded against political dissidents.

Arnon drew the ire of the authorities for remarks he made about the monarchy at a rally on Monday. He was reported to have spoken about laws that were passed to increase the power of King Maha Vajiralongkorn, who took the throne in 2016. A second man, Panupong Jadnok, was also arrested on protest-related charges, and more arrests were expected.

The monarchy is a sensitive topic in Thailand, and public criticism of it has long been taboo and illegal. But the continuing domination of Thai politics by the military and a royalist elite has sparked frustration, especially among younger Thais. On social media and at demonstrations, there has been limited but unprecedented criticism of the monarchy, which is subject to prosecution under a lese majeste law that carries a punishment of up to 15 years in prison.

The army staged coups in 2006 and 2014 that ousted elected governments, and the military regime that held power in 2014 until last year passed laws ensuring it would retain influence after the 2019 general election. A political party considered a proxy for the army managed to assemble a coalition government led by the former army commander who staged the 2014 coup, Prime Minister Prayuth Chan-ocha.

One of the leaders questioned whether the prime minister's statement this past week that he would form a committee and consider their views was simply a tactic.

“(Our demands) are clear enough for the government to hear and follow. To set up a committee to have hearings is like an act. It’s like a show with no meaning. Is it to buy time?” said Tattep Ruangprapaikitseree.

“They think that we will disappear. They believe that we will fade away, so they set up this committee to buy time. But the fact is we want real change. We want to send our demands to those with power to make decisions, not to some rubber-stamp committee.”

At Bangkok’s iconic Democracy Monument, where the leaders spoke, a handful of supporters cheered and gave a three-fingered salute, a symbol of resistance borrowed from the Hollywood movie “The Hunger Games.” A small group of police officers kept watch but did not intervene.

Though Prayuth said he would meet with the protest leaders, it is unlikely they will reach agreement. While he has said he is open to possible constitutional changes he is unlikely to agree to dissolve Parliament or call new elections.

Under Prayuth’s leadership, the Thai economy has struggled, while a series of corruption scandals and a lack of accountability have badly tainted his administration’s claim of clean governance.