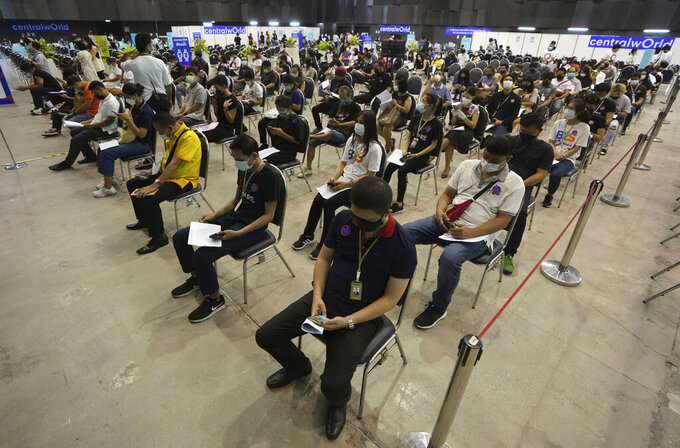 People sit and wait after receiving the Sinovac COVID-19 vaccine to be sure of no side effects in Bangkok, Thailand, Monday, May 31, 2021. (AP Photo/Sakchai Lalit)

BANGKOK (AP) — Thailand is redoubling efforts to stop the spread of the coronavirus in labor camps, factories and markets as the number of new reported cases surged Monday to the highest level so far.

The government reported a record 5,485 new cases on Monday, with nearly 2,000 in prisons. Confirmed deaths increased by 19, bringing the total to 1,031 since the pandemic began.

Concern over the rising numbers prompted the government to overrule a plan by Bangkok’s governor to ease some pandemic restrictions in the capital, including the reopening of parks. The plan, which was to take effect on Tuesday, will be postponed 14 days.

Thailand had managed to keep outbreaks largely under control, at great economic cost especially for tourism, because foreign visitors were largely banned from entering the country. That changed in early April, when a cluster of cases centered on Bangkok bars and clubs spread as many people traveled during the weeklong Thai New Year holiday.

The total number of confirmed cases has now risen to 159,792, of which 82% occurred during the latest surge. Many of the cases are concentrated in prisons, housing for construction workers, factories, slums and low-income housing areas.

Last week, workers protested over conditions at the factory where they were working in Petchaburi, in central Thailand. Photos posted online showed workers quarantined in a big, empty building, with blankets laid in rows on a concrete floor.

The Cal-Comp Electronics (Thailand) factory, one of the largest suppliers of electronics to major companies like Western Digital, Seagate, Hewlett Packard and Panasonic, closed for 14 days beginning May 21 and as of Friday had reported 3,730 confirmed cases.

Officials at the company referred questions to the provincial government, which said a prolonged electricity outage had added to frustrations among the workers, but that conditions had been improved with provision of more water, better food, and fans to better circulate the air.

Bangkok reported 1,356 of the cases on Monday. A spokesperson for the government's coronavirus center, Apisamai Srirangsan, said the capital is dealing with 45 clusters.

Authorities were analyzing how to stop infections from spreading between workers who live, work and commute in close quarters.

“We noticed that the workers from different factories sometimes live in the same area, and it made the virus spread to other places. Or another assumption is that a lot of them work as sub-contractors, so they have to move from one site to another all the time,” Apisamai said.

In some parts of Bangkok and elsewhere, workers have been ordered to stay inside construction sites.

So far, about 3.3% of the country’s roughly 69 million people have received at least one vaccine dose. The government has secured just 7 million vaccine doses in total.

The government has been inching toward reopening the country to tourism, even as it struggles to quash this latest, biggest outbreak, as the pandemic throttles the economy.

Sethaput Suthiwartnarueput, governor of the central bank, estimated growth might not return to pre-pandemic levels until early 2023, the Bangkok Post and local other media cited him as saying at a seminar on Monday.