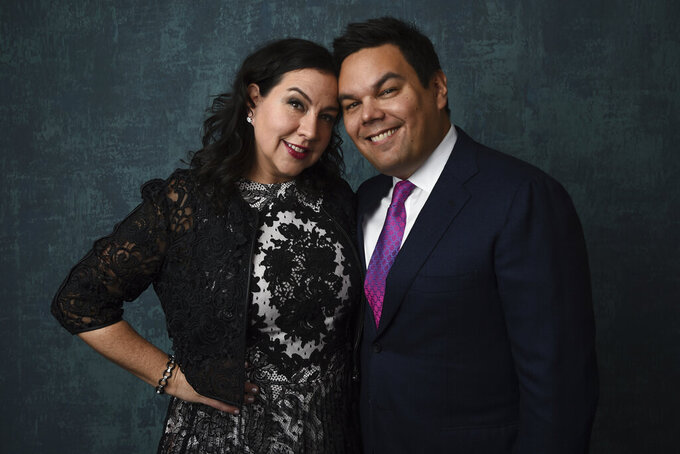 FILE - In this Jan. 27, 2020 file photo, Kristen Anderson-Lopez, left, and Robert Lopez pose for a portrait at the 92nd Academy Awards Nominees Luncheon in Los Angeles. The husband-and-wife songwriting duo of Kristen Anderson-Lopez and Bobby Lopez are just some of the luminaries who have signed on to give master classes and advise fledgling artists as a way to benefit the nonprofit TheaterWorksUSA. (AP Photo/Chris Pizzello, File)

NEW YORK (AP) — Imagine being a young songwriter and getting tips from a creative team who really know how to construct a tune. After all, they wrote “Let It Go.”

The husband-and-wife songwriting duo of Kristen Anderson-Lopez and Bobby Lopez are just some of the luminaries who have signed on to give master classes and advise fledgling artists as a way to benefit the nonprofit TheaterWorksUSA.

“The theater makers and the actors have all just come together trying to find ways to use their creativity to keep theater alive, to blow on the embers to keep it alive until we can all be in a space together again,” said Anderson-Lopez, half of the team that wrote “Frozen” and “Frozen 2.”

The participating composers, performers and directors will use Zoom to offer their expertise on audition technique and performance. Some classes will be one-on-ones and others will have multiple participants. Prices range from $35-$150 with most of the teachers donating their time.

The new initiative comes as theaters across the country have been stilled by the coronavirus pandemic. Most of the master class teachers have a personal tie to TheaterWorksUSA, which for decades has been a producer of family theater, including “Dog Man: The Musical,” “Pete the Cat” and “Click, Clack, Moo.”

“TheaterWorks has always been an important organization for us. They were really the producers who first took a bet on us,” Bobby Lopez said. “When we were starting out, they gave us our first job and they’ve done so for so many other professionals.”

Anderson-Lopez and Lopez said they leapt at the chance to help their old employer and raise spirits of their young students.

“When I was growing up as a girl, I didn’t even know women could be songwriters and theater makers. So I feel a big obligation to just show up and say, ‘Look, here’s someone who is doing it,’” Anderson-Lopez said. “If they can see it, they can be it.”

Both songwriters have been hunkered down with their two daughters during the stay-at-home orders but quarantine has an upside: They're writing a song a week. They're hopeful live theater will return.

“Theater will not go away. But our job is to just try and keep the seeds alive as long as we possibly can. And those seeds are our vital nonprofit organizations like TheaterWorksUSA,” Anderson-Lopez said.