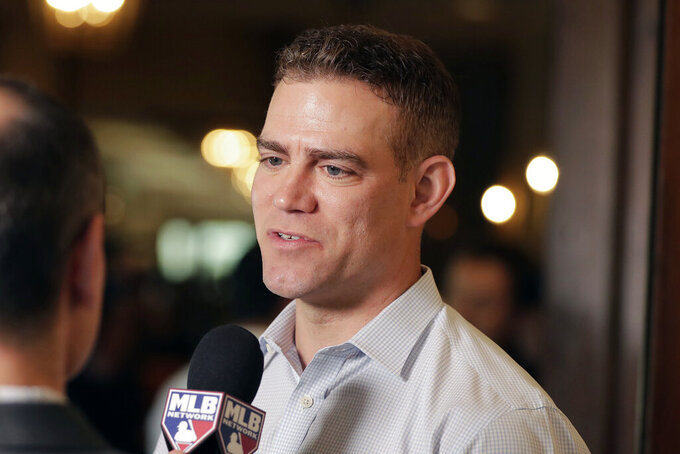 FILE - In this Nov. 13, 2019, file photo, Chicago Cubs president of baseball operations Theo Epstein speaks at a media availability during the Major League Baseball general managers annual meetings in Scottsdale, Ariz. Theo Epstein, who transformed the long-suffering Chicago Cubs and helped bring home a drought-busting championship in 2016, is stepping down after nine seasons as the club's president of baseball operations. The team announced Monday, Nov. 16, 2020, Epstein is leaving the organization, and general manager Jed Hoyer is being promoted to take his place. (AP Photo/Matt York, File) 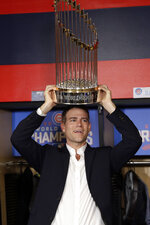 CHICAGO (AP) — Listening in on fans' conversations during his walks home from Wrigley Field, Theo Epstein could sense their excitement as the Chicago Cubs set themselves up to capture that long-awaited World Series championship.

It was as if they were all in it together.

“It felt like the lines between fans and front office members and players were blurred because we were all part of this club that was in on a secret,” he said. “We all kind of knew what was about to happen, maybe before the rest of the baseball world did.”

Epstein, who transformed the long-suffering Cubs and helped bring home a drought-busting championship in 2016, is stepping down after nine seasons as the club's president of baseball operations, the team announced Tuesday. General manager Jed Hoyer is being promoted to take Epstein's place.

Epstein said after the season he anticipated remaining on the job for at least one more year, with his contract set to expire in 2021. But he said Tuesday it became apparent this past summer “for a number of reasons” it was time to move on.

“It became really clear that we'd be facing some significant long-term decisions this winter, decisions with long-term impacts,” Epstein said. “Those types of decisions are really best made by somebody who's going to be here for a long time, not just for one more year. ... Jed clearly is that person.”

Chairman Tom Ricketts said it was a “sad day for me personally” and called Epstein a “great partner and truly a great friend.”

Though the COVID-19 pandemic wreaked financial havoc on baseball, Ricketts said money “had nothing to do” with Epstein's decision. Epstein, who won’t be paid for 2021 by the Cubs, said Ricketts did not bring up his salary when they discussed his future. He also said he was not asked to resign.

The 46-year-old Epstein, who grew up near Boston and helped the Red Sox break an 86-year drought with World Series championships in 2004 and 2007, is one of five executives to win titles with multiple organizations. He, Pat Gillick, John Schuerholz and Dave Dombrowski are the only ones to do so with teams in each league.

Epstein hopes to stay involved with baseball while he plots his next move. He plans to run a team again, though probably not next season. He would like to be part of an ownership group at some point.

“Baseball team owners can be transformed into forces for civic good and help a lot of people and be involved in a lot of the important conversations in the city and be a solution for a lot of issues in cities," Epstein said. “So that does appeal to me. A lot of things would have to go right for that to happen. Usually, for that type of thing to happen you need access to a lot of capital. ... Who knows? Maybe I have plans for some of those things down the line, but a lot would have to go right for that to happen.”

For now, Epstein will remain in Chicago with his wife and two sons. He said he would likely become a season-ticket holder, maybe even a bleacher bum. And he vowed to buy beers for any Cubs fan he sees in a bar following the coronavirus pandemic, until the team wins a World Series under Hoyer.

Epstein oversaw a massive rebuild when he came to Chicago following the 2011 season. He overhauled the farm system as well as the scouting and analytics operations, helping to produce one of the most successful stretches in the franchise’s history with a big assist from Hoyer.

With homegrown stars Kris Bryant and Javier Báez, shrewd trades for players such as Anthony Rizzo and Jake Arrieta, the signing of Jon Lester and the hiring of former manager Joe Maddon, the Cubs transformed into perennial contenders. They reached the NL championship series three times in Epstein's nine seasons.

In 2016, they won 103 games to run away with the NL Central and took out the Los Angeles Dodgers in the NLCS for their first pennant since 1945. The Cubs fell behind 3-1 to the Indians in the World Series before beating them in seven games, ending a title drought dating to 1908.

The Cubs' 505 regular-season victories since 2015 trail only Los Angeles (528) and the Houston Astros (510). Chicago, the Dodgers, New York Yankees and Astros are the only clubs with at least five playoff appearances in the past six seasons. But the Cubs have not advanced in the playoffs since the 2017 team lost to Los Angeles in the NLCS.

In the pandemic-shortened 2020 season, Chicago won the NL Central but got swept by Miami in the first round of the playoffs.

“If you look at my track record in Boston and then here, in the first six years or so, we did some pretty epic things,” Epstein said. “And then the last couple years weren't as impressive. Maybe what that tells me is I think I'm great at and really enjoy building and transformation and triumphing. Maybe I'm not as good and not as motivated by maintenance.”

Hoyer and Epstein worked together in Boston when the Red Sox won two World Series and reunited when Epstein took the job with the Cubs. In between, Hoyer led San Diego’s baseball operations.

“I have been so fortunate to work alongside Theo for 17 of the last 19 years,” Hoyer said in a statement. “I could not have had a better mentor or a more loyal and trusted friend. He has already changed two storied franchises with his passion, creativity, intellect and leadership. I have no question that the next chapters in his career will be equally impressive and impactful.”