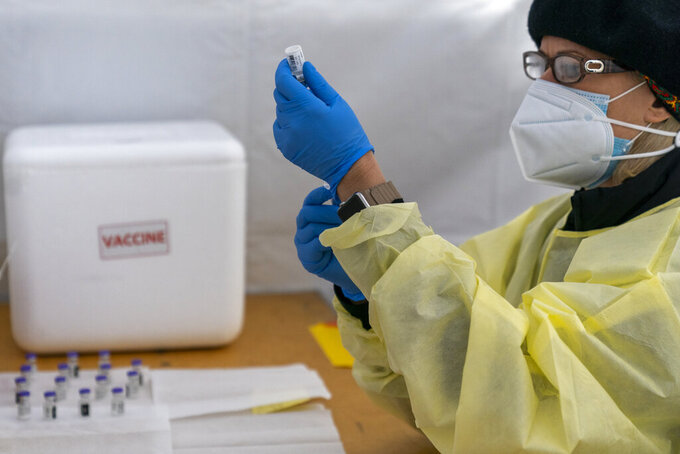 A pharmacist fills a syringe with the Pfizer-BioNTech COVID-19 vaccines at a pop-up vaccination site at the God's Battalion of Prayer Church, Wednesday, Feb. 3, 2021, in the Brooklyn borough of New York. SOMOS and Elderplan volunteer nurses are expected to vaccinate up to 500 older New Yorkers who attend the church or live in surrounding areas. (AP Photo/Mary Altaffer)

Here’s what’s happening Wednesday with the coronavirus pandemic in the U.S.:

— As the nation’s COVID-19 vaccination campaign accelerates, governors, public health directors and committees advising them are holding key discussions behind closed doors, including debates about who should be eligible for the shots and how best to distribute them. A review by The Associated Press finds that advisory committees created to help determine how to prioritize vaccine doses have been holding private meetings in at least 13 states that are home to more than 70 million people. In at least 15 other states, such meetings are open to the public. But even in those states, governors and health officials can modify or override committee recommendations with little or no public explanation.

— President Joe Biden is telling House Democrats he’s not married to all the specifics of the $1.9 trillion COVID rescue plan. But he wants them to “go big” and not let the size or scope shrink. Biden delivered private remarks to the Democratic caucus on Wednesday, and followed with a meeting with Democratic Majority Leader Chuck Schumer and top senators at the White House. Biden says his proposed $1,400 direct payments to Americans must stay in the bill. Biden has panned a slimmer Republican alternative as insufficient. But he’s confident he will win GOP support. He’s told Democrats he’s “got your backs” as Congress prepares for votes on the sweeping deal.

— San Francisco has sued its own school district to try to force a resumption of in-person instruction. The lawsuit filed Wednesday, which may be the first of its kind in the U.S., comes as school systems are coming under increasing pressure from parents and politicians to reopen classrooms that were shuttered because of the pandemic. Teachers unions in many large cities, including San Francisco and Chicago, say their members shouldn't be asked to return to classrooms until they are vaccinated.

QUOTABLE: “You just don’t know if they’re infected, so as difficult as that is, at least this time around, just lay low and cool it," Dr. Anthony Fauci said Wednesday about the risks of hosting or attending Super Bowl parties during the pandemic.

ICYMI: A new study found that cleaner air from the pandemic lockdown warmed the planet a bit in 2020, especially in places such as the eastern U.S., Russia and China. The study released Tuesday found that the lockdown reduced soot and sulfate air particles, which are pollution that also reflects the sun’s heat and helps cool areas briefly. The result is that some places warmed temporarily by as much as two-thirds of a degree Fahrenheit last year and the planet as a whole warmed by about half a degree. The study’s lead author said that loss of cooling outweighed any reduction of heat-trapping carbon pollution last year.

ON THE HORIZON: Hiring has weakened for six straight months. Nearly 10 million jobs remain lost since the coronavirus started and the Congressional Budget Office this week forecast that employment won’t regain its pre-pandemic level until 2024. However, a hopeful view is gaining steam that as vaccinations reach a critical mass in the U.S., perhaps around midyear, the economy and job market will strengthen much more quickly than they did after previous recessions. For now, though, the economy’s rebound has been highly unequal. The unemployment rate for the poorest quarter of Americans is roughly four times that of the wealthiest quarter.