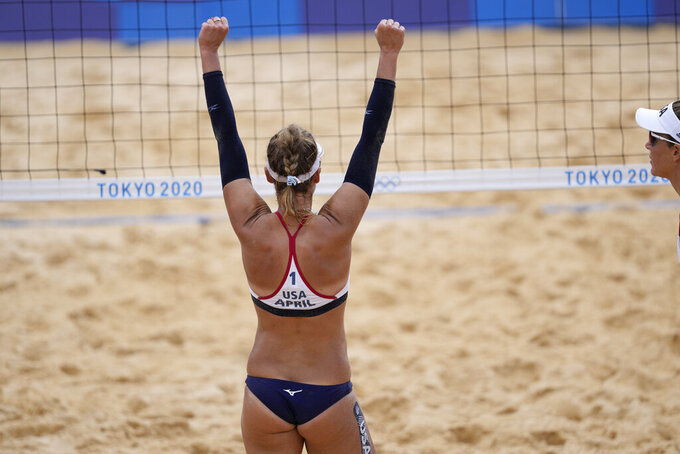 TOKYO (AP) — Three-time gold medalist Kerri Walsh Jennings missed out on her bid to qualify for a sixth trip to the Summer Games. Fortysomething four-time Olympians Phil Dalhausser and Jake Gibb both retired after getting knocked out in Tokyo.

Defending Olympic champion Laura Ludwig is heading back to Germany after losing to the U.S. in the quarterfinals on Tuesday.

The 2012 silver and 2016 bronze medalist joined with Alix Klineman to beat Ludwig and Maggie Kozuch 21-19, 21-19 on Tuesday, leaving Ross as the last woman with an Olympic medal still standing at the Shiokaze Park beach volleyball venue.

A victory in the semifinals against Switzerland would clinch at worst a silver; a loss would put them in the third-place match. In the other semifinal match, Tina Graudina and Anastasija Kravcenoka of Latvia will face Mariafe Artacho and Taliqua Clancy of Australia after both beat Canadian teams in the quarterfinals.

“Staying motivated is really easy at this point, at this stage of the game,” Klineman said. “I mean, we can pretty much taste a medal.”

A 41-year-old Californian who already has said she is eyeing the 2024 Paris Games, Ross inherited senior status on the U.S. beach volleyball team this week when first Dalhausser, then Gibb said after they were eliminated that they are going to retire.

But there’s no reason for Ross to think about the future — at least not beyond Thursday’s semifinal against Switzerland’s Joana Heidrich and Anouk Verge-Depre, who beat Brazil's Rebecca and Ana Patricia 21-19, 18-21, 15-12 on Tuesday.

“I just have no answer to those questions,” Ross said. “I’m here. I’m feeling good and ready to keep fighting.”

And this time she has the 31-year-old Klineman to keep her young. She is Ross’ third partner in as many Olympics, and the first that is younger.

“I’m not surprised at her success,” Klineman said. “I train with her every day, and I’m around her all the time. And I just see how motivated and driven she is in all aspects of her life.”

Klineman said spending time with Ross has taught her what it takes to have sustained success — not just not during practice but also on the road, when Ross might be reading a book about improving one's mindset or a listening to a podcast about recovery after working out.

“She’s taught me a lot in this journey. And so I’m really grateful to be by her side,” Klineman said. “She was just always trying to be at her best. And so I don’t think it’s a coincidence that she’s been here three times.”

Ludwig, 35, opened her fourth Olympics with a loss to Switzerland, but then beat Japan in the next match of the round-robin and took the third by default because of a positive COVID-19 test that sent the Czechs home from Tokyo. She and Kozuch beat Brazil to reach the quarterfinals.

They led the Americans by three points early on and still had an 18-17 lead before the Americans took the first set. In the second, Ross and Klineman pulled away after a 16-all tie.

For Ludwig, who took time off to have a baby after the Rio de Janeiro Games, the struggle was to focus on these Olympics and not what she had done in the past.

“It’s more about the pressure from yourself, because you achieved something and you want to achieve the same or more,” she said. “And you feel the potential and want to have everything. But it’s good to stay focused on what you have now and reflect what is possible now ... and not think already about the future — what could have been, medal or not. I think that makes it more difficult and frustrating if you don’t make it.”