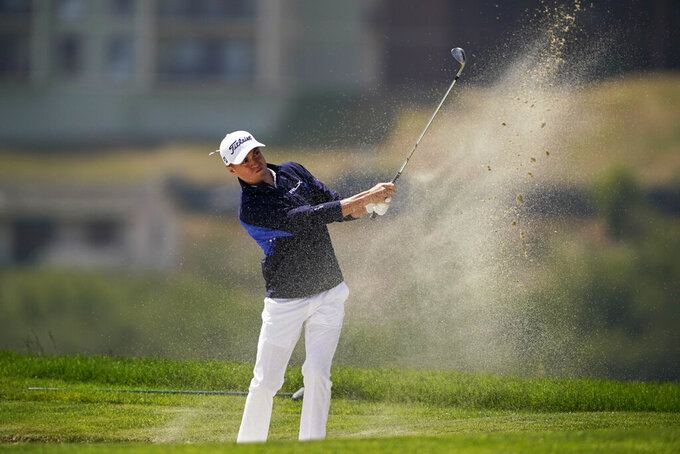 Justin Thomas hits from the bunker on the 16th hole during the third round of the PGA Championship golf tournament at TPC Harding Park Saturday, Aug. 8, 2020, in San Francisco. (AP Photo/Charlie Riedel)

SAN FRANCISCO (AP) — Justin Thomas shot only one round in the 60s at Harding Park, tied for 37th and lost the No. 1 ranking that he had held all of one week.

The week wasn’t a total loss.

Thomas has played so well this year with a PGA Tour-best three victories that he is assured of being the No. 1 seed when the FedEx Cup postseason begins. That also means he wins the Wyndham Rewards for leading after the regular season, which comes with a $2 million bonus.

So he earned $45,000 from the PGA Championship, picked up $2 million and likely will lose $5,000 or so from missing a putt (not because of missing the putt, but because of his verbal reaction to why the ball didn’t go into the cup).

The rest of the payout from the Wyndham Rewards — it goes through 10th place — has not been decided. Four players from the top 10 are in the field at the Wyndham Championship: Webb Simpson (No. 3), Sungjae Im (No. 5), Patrick Reed (No. 6) and Brendon Todd (No. 9).

Lanto Griffin and Abraham Ancer are not far out of the top 10 and will have a chance to pick up an extra bonus.

Otherwise, the final event of the regular season doesn’t hold quite as much pressure as it normally us. At stake is a chance to keep playing in the lucrative playoff events. But no one will be losing his full card. Because of the coronavirus pandemic that shut down golf for three months, the tour said in late April that players at least will keep the same status they had at the start of the 2019-20 season, with an opportunity to improve it based on their play.

That’s good news for someone like Russell Knox, who had a streak of 10 missed cuts — before and after the shutdown — and is No. 124 in the FedEx Cup going into the Wyndham Championship.

For others, it’s simply a chance to improve their standing going into the postseason. This will be the second year of only three postseason events. The top 125 go to The Northern Trust, but only the top 70 make it to the BMW Championship.

That makes the week particularly important for Brooks Koepka, whose 74 on Sunday at the PGA Championship was a lost opportunity for a historic three-peat and the FedEx Cup. Koepka, scheduled to play his sixth straight event, moved up only four spots to No. 92.

The struggles of Jordan Spieth were never more evident than Saturday morning at Harding Park when he was paired with Justin Thomas, one of his best friends. Both made the cut on the number. Only one of them stayed near the bottom of the back. Thomas ran off five birdies in seven holes. Spieth had four bogeys in six holes, shooting 76.

Spieth closed with a 67 to tie for 71st. It was the 14th time in the last 15 events where he made the cut that he finished at least eight shots out of the lead. The exception was Colonial, when he shot 71 the last day to tie for 10th, four shots behind.

Spieth declined interviews after the first three rounds at Harding Park, stopping briefly with ESPN on Sunday to talk about how the course played.

“I had fun. I felt I swung the club better and hit some nice putts,” he said. “Getting repetitions on a major championship golf course is always a good thing.”

Thomas wasn’t overly concerned with Spieth and said he believes his friend will be fine.

“All it takes sometimes is one week and all your confidence gets back,” Thomas said.

Spieth gets back to work this week at the Wyndham Championship. He has not made it to the Tour Championship since 2017, the year of his last victory. He now is No. 94, assured of the postseason, but with only three playoff events, he is not guaranteed to play more than one week.

Phil Mickelson returned from the shutdown wearing sunglasses, and it wasn’t all about style.

During his stint in the booth with CBS on Saturday at the PGA Championship, Mickelson said he treated his face with a cream that helps prevent sun cancer. For two weeks, he said, the skin gets splotchy as it kills cancer cells.

“And when I went outside, I had to wear some protection,” he said. “So I wore these glasses to protect the area around my eyes.”

Turns out he liked them. They didn’t shift on his face when swinging a club. He played golf with them and had no issues.

“That’s kind of where it started,” he said. “And then my eyes were much more relaxed at the end of the day. They weren’t squinting the whole time.”

But he couldn’t leave it at that.

“Not everybody can pull that look off,” Mickelson said.

Former Masters champion Charl Schwartzel had reason to celebrate on Friday without ever being in the hunt at the PGA Championship. He got up-and-down from a bunker on the 18th hole, making a par putt just inside 15 feet for a 68 to make the cut on the number.

That meant he was guaranteed at least two FedEx Cup points. And that’s exactly what he needed to equal the points of No. 125 last year.

Schwartzel, who tied for 58th, has battled through a wrist injury and had shown signs of progress. Making the cut was big. So was his tie for third at the 3M Open two weeks prior. That got the attention of the PGA of America, which gave him an exemption into the PGA Championship.

“It’s been quite a struggle for me for the last two years with injuries,” Schwartzel said. “I had to take a medical (extension) and got off to a real roller-coaster start — some good stuff, and then some really bad stuff. It’s been wild, and hard to get things going. It’s been up and down."

He now is No. 125 in the FedEx Cup this year, 11 points ahead of Bronson Burgoon. Schwartzel is playing this week in the Wyndham Championship, and needs to at least hold his position to advance to the postseason for the first time in two years.

Li Haotong finished with a double bogey, and it was more costly than just money. That knocked him out of the top 10 and cost him a spot in the U.S. Open next month at Winged Foot in New York.

The U.S. Open offered spots to the leading three players at the PGA Championship not already eligible, provided they were among the top 10. That double bogey sent Li from a tie for 10th to a tie for 17th.

Two more spots are available at the Wyndham Championship, while the attention also shifts to the Korn Ferry Tour.

Five more Korn Ferry Tour players can get into the U.S. Open based on a special money list from these next three events.

Danielle Kang will try to become the first player in four years to win three straight LPGA Tour events. She is at the Scottish Ladies Open. The last to do it was Ariya Jutanugarn in 2016. ... Dustin Johnson is the first player to be runner-up in the PGA Championship in successive years since Jack Nicklaus in 1964 and 1965. . ... The LOCALiQ Series for players on the Canadian, China and Latin America circuits for the PGA Tour now has a conclusion. The tour says a season-ending tournament on Oct. 26-30 will be held at the Ocean Club in Paradise Island on Nassau, Bahamas. It will culminate an eight-tournament season for those sidelined by the smaller circuit’s seasons being canceled by the pandemic.

In the last five years of the PGA Championship, players have posted all four rounds in the 60s without winning 16 times. That's one more time than the previous 58 years combined.

“Coming down the stretch in the back nine of a major, everybody knows that’s the moment that you go take it. Are you a leaderboard watcher? Did you know where you were? What’s your mindset in that moment the last 2 1/2 hours of your round?” — Golden State Warriors guard Stephen Curry, asking the first question of Collin Morikawa after he won the PGA Championship.