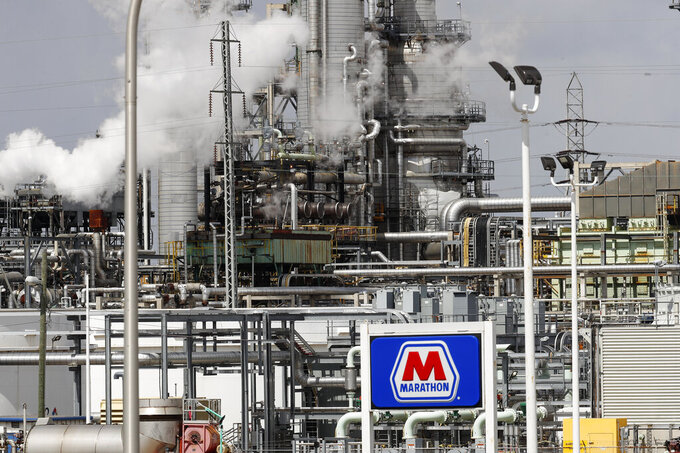 FILE - In this April 21, 2020, file photo the Marathon Petroleum Corp. refinery is shown in Detroit. Thousands of oil and gas operations, government facilities and other sites won permission to stop monitoring for hazardous emissions or otherwise bypass rules intended to protect health and the environment because of the coronavirus outbreak, The Associated Press has found. (AP Photo/Paul Sancya, File)

Thousands of oil and gas operations, government facilities and other sites have won permission to stop monitoring for hazardous emissions or otherwise bypass rules intended to protect health and the environment because of the coronavirus outbreak, The Associated Press has found.

The result: approval for less environmental monitoring at some Texas refineries and at an army depot dismantling warheads armed with nerve gas in Kentucky, manure piling up and the mass disposal of livestock carcasses at farms in Iowa and Minnesota, and other increased risks to communities as governments eased enforcement over smokestacks, medical waste shipments, sewage plants, oilfields and chemical plants.

The Trump administration paved the way for the reduced monitoring March 26 afte r being pressured by the oil and gas industry, which said lockdowns and social distancing during the pandemic made it difficult to comply with pollution rules. States are responsible for much of the oversight of federal environmental laws, and many followed with their own policies.

AP’s two-month review found that waivers were granted in more than 3,000 cases, representing the overwhelming majority of requests citing the outbreak. Hundreds were approved for oil and gas companies. AP reached out to all 50 states citing open-records laws; all but one, New York, provided at least partial information, reporting the data in differing ways and with varying level of detail.

Almost all those requesting waivers told regulators they wanted to minimize risks for workers and the public during a pandemic — although a handful reported they were trying to cut costs.

The Environmental Protection Agency says its clemency does not authorize exceeding pollution limits. Regulators will pursue those who “did not act responsibly under the circumstances,” EPA spokesman James Hewitt said in an email.

But environmentalists and public health experts say it may be impossible to determine the impact. “The harm from this policy is already done,” said Cynthia Giles, former EPA assistant administrator under the Obama administration.

EPA says it will end the clemency this month.

“We believe that by taking these measures, we can do our part to slow the spread of the COVID-19 virus,” Tim Peterkoski, Marathon's environmental auditing head, told Indiana.

Marathon also won permission to skip environmental tests at many of its refineries and gas stations in California, Michigan, North Dakota and Texas.

In New Mexico, Penny Aucoin, a resident of the oil-rich Permian Basin, said that since the pandemic began she and her husband have asked regulators to investigate what they feared could be dangerous leaks from one of the many oil and gas companies operating near their mobile home.

Maddy Hayden, New Mexico’s environmental spokesperson, said her agency stopped in-person investigations of citizen air-quality complaints from March to May to protect staff and the public but would respond to emergencies.

Almost every state reported fielding requests from industries and local governments to cut back on compliance, often for routine paperwork but also for monitoring, repairs and other measures to control hazardous soot, toxic compounds, heavy metals and disease-bearing contaminants.

Manufacturer Saint-Gobain, whose New Hampshire plant has been linked by the state to water contaminated with PFAS chemicals, asked to delay smokestack upgrades that would address the problem. The company cited problems the company’s suppliers and contractors have faced because of the coronavirus.

The AP’s findings run counter to statements in late June by EPA official Susan Bodine, who told lawmakers the pandemic was not causing “a significant impact on routine compliance, monitoring and reporting” and that industry wasn’t widely seeking relief from monitoring.

Separately, EPA enforcement data shows 40% fewer tests of smokestacks were conducted in March and April compared with the same period last year, according to the Environmental Data and Governance Initiative, a network of academics and non-profits.

EPA’s policy was “primarily related to record keeping, training and flexibility in the timing of routine inspections," said Frank Macchiarola, senior vice president at the American Petroleum Institute, which pushed for the policy. He said the industry’s pollution equipment continues to operate.

Oil and gas companies in Arkansas received a blanket, months-long waiver for safety testing temporarily abandoned wells and other activities.

Alaska authorized delayed inspections at dozens of massive tanks used to store petroleum, let companies defer drills designed to ensure they can quickly respond to major oil spills, and promised leniency for some air pollution violations stemming from the outbreak.

In Wyoming, regulators gave breaks on air emissions rules in about 300 cases, mostly for oil and gas companies, including ExxonMobil and Sinclair.

As supply chains broke down, Minnesota granted more than 90 waivers on how many animals could be stuffed into feedlots, potentially raising risks of water contamination from manure. Farms and landfills in Iowa received variances to allow for the mass burial and composting of livestock.

Michigan approved or was reviewing requests from several cities to delay replacing lead water pipes or testing for lead, spurred in some instances by the Flint water crisis.

“It’s like saying we’re going to remove the radar guns and remove speedometers, but you still have to comply with the speed limit,” said Schaeffer, now head of the Environmental Integrity Project advocacy group.