For Tigers, top draft pick another chance to speed rebuild 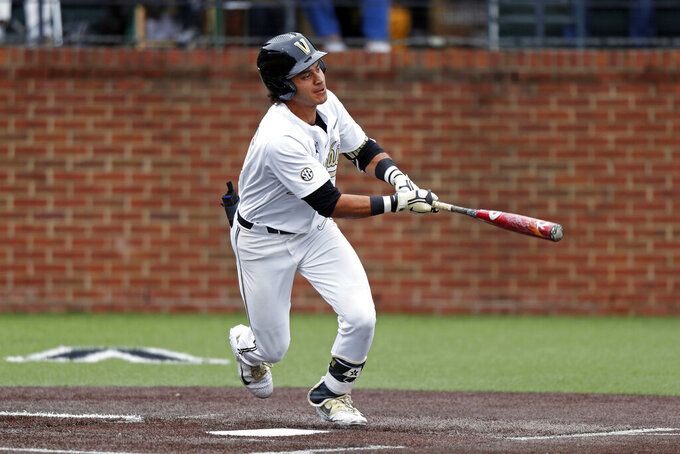 FILE - In this May 11, 2019, file photo, Vanderbilt's Austin Martin connects for a hit during an NCAA college baseball game against Missouri in Nashville, Tenn. The Detroit Tigers are rebuilding around an impressive group of minor league pitchers. Now, it might be time to add a star hitting prospect to the mix. Whether it’s Arizona State slugger Spencer Torkelson or Vanderbilt’s Austin Martin, Detroit has a chance to add another potential standout when it makes the No. 1 selection in Wednesday night’s Major League Baseball draft. (AP Photo/Wade Payne, FIle)

DETROIT (AP) — The Detroit Tigers are rebuilding around an impressive group of minor league pitchers.

Now, it might be time to add a star hitting prospect to the mix.

Whether it’s Arizona State slugger Spencer Torkelson or somebody else, Detroit has a chance to add another potential standout when it makes the No. 1 selection in Wednesday night’s draft. Although the Tigers have been vague about their intentions, this is an opportunity to add a young position player to an organization that has done a better job stocking up on pitching prospects lately.

“You’ve got to get the best guy, that’s number one,” Scott Pleis, Detroit’s director of amateur scouting, said recently. “And then hopefully it falls into your needs, also, and then everybody’s happy.”

This year, the best guy may be Torkelson, who is ranked by mlb.com as the No. 1 prospect in the draft. Second on that list is Vanderbilt’s Austin Martin, another position player. Texas A&M pitcher Asa Lacy is No. 3.

Torkelson, a junior first baseman, has hit 54 home runs in 129 career games at Arizona State. On a conference call with reporters Tuesday, general manager Al Avila was asked directly if the Tigers were planning to pick Torkelson. Not surprisingly, the GM was coy in his response.

“It's a question we can't answer today,” Avila said.

It’s the second time in three years Detroit is picking first. The Tigers took right-hander Casey Mize with the top pick in 2018, and he’s one of a handful of highly touted minor league pitchers in their system. Matt Manning and Tarik Skubal have also achieved a good bit of acclaim. If a season is played this year, any of them could end up in the majors at some point.

Riley Greene, Detroit’s top position player prospect according to mlb.com, is 19 and hasn’t played above Class A yet.

“Obviously, there’s been a lot of talk, and the need for a bat and stuff like that. We have a lot of really good arms, and knock on wood, they all continue to stay that way,” Pleis said. “It’s a tough thing when you’re taking these guys, because if you start thinking more need than anything else, you’re going to pass a guy that might be quite a bit better. You have to be really careful when you do it.”

This year's top pick may be Detroit’s best remaining chance to accelerate its rebuild. The Tigers have already traded some of their most valuable players over the past few seasons. They still have Miguel Cabrera, but his big contract and declining production make him difficult to move.

Left-hander Matthew Boyd showed promise last year and could bring back some young players in a deal at some point — but it seems increasingly like the draft is where Detroit will need to make headway if it wants to add more good prospects soon.

The coronavirus disrupted the 2020 season for both colleges and high schools, so prospects haven’t had as much of a chance this year to help or hurt their draft outlooks. The lack of games over the past couple months has made preparing for this draft different, but that’s an issue every team has to deal with.

The Tigers just have more at stake, picking No. 1 — and they also have more to lose if player development at the minor league level is slowed because of the virus.

“Unfortunately, because of the pandemic, the coronavirus, it's kind of thrown a monkey wrench into the plans. It is a little bit of a setback, and we'll see how it affects it in the years to come,” Avila said. “But right now, it's an exciting time to be a Detroit Tiger.”