Tokyo Olympics cost $15.4 billion. What else could that buy? 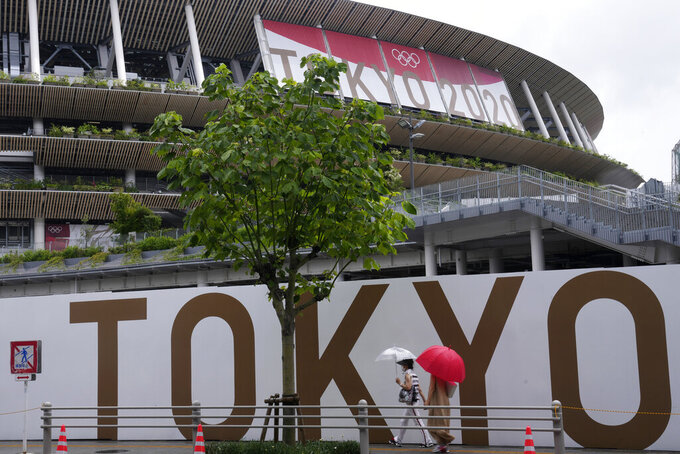 FILE - In this July 27, 2021, file photo, people walk past the National Stadium in Tokyo. The price tag for the Tokyo Olympics is $15.4 billion. Tokyo built eight new venues. The two most expensive were the National Stadium, which cost $1.43 billion, and the new aquatic center, priced a $520 million. (AP Photo/Kiichiro Sato, File)

TOKYO (AP) — The official price tag for the Tokyo Olympics in $15.4 billion, which a University of Oxford study says is the most expensive on record. What else could those billions buy?

The ballpark figure for building a 300-bed hospital in Japan in $55 million. So you could put up almost 300 of these.

The average elementary school in Japan costs about $13 million. For that price, you get 1,200 schools.

A quick search finds a Boeing 747 is priced at roughly $400 million. Voila: 38 jumbo jets for the cost of the Tokyo Olympics.

The point is, Olympic Games are costly and may bump aside other priorities. In fact, several Japanese government audits say the real outlay for the Tokyo Games is even more than the official figure, perhaps twice as much. All but $6.7 billion comes from public money from Japanese taxpayers. According to the latest budget, the IOC's contribution is $1.3 billion. It also chipped in several hundred million more after the pandemic.

Olympic costs have been dissected in a study by the University of Oxford, which found that all Games since 1960 have had cost overruns averaging 172%. Tokyo's cost overrun is 111% or 244% depending on which cost figure you select.

“The IOC and host cities have no interest in tracking costs, because tracking tends to reveal cost overruns, which have increasingly become an embarrassment to the IOC and host cities," Oxford author Bent Flyvberg said in an email. Flyvberg also pointed out that costs would be reduced if the IOC picked up more of the bills rather than opening organizers' wallets.

Following costs is a tedious exercise, dotted with arguments about what are — and what are not — Olympic expenses. Flyvberg explained that numbers from different games can be “opaque and non-comparable” and require sorting and tracking.

“The problem is disentangling what is Olympics cost and what is just general infrastructure spending that would have happened anyways but was sped up for the Olympics.” Victor Matheson, who studies sports economics at College of the Holy Cross, wrote in an email.

For example: The 1964 Tokyo Games, he says, "were either one of the cheapest or one of the most expensive Games depending on how much of the preparation costs count as the Olympics.”

The 2008 Beijing Olympics, usually listed as costing more than $40 billion, and the 2014 Sochi Winter Olympics — priced at $51 billion — are often singled out incorrectly as the most expensive.

“The numbers for Beijing and Sochi likely include wider infrastructure costs: roads, rail, airports, hotels, etc. Our numbers do not,” Flyvberg wrote in an email.

The blur around costs — and who pays — allows the IOC to pitch the Olympics as a global party that brings the world together and promotes world peace. Everybody is seen to benefit, and the financial interests of the not-for-profit IOC are hidden behind national flags, pomp and ceremony, and heart-tugging stories about athletes winning gold and beating the pandemic.

Tokyo, of course, saw costs soar with the postponement. Officials say the delay added $2.8 billion to the final total. The postponement and a subsequent ban on fans also wiped out virtually all ticket sales income, which was budgeted at $800 million. That shortfall will have to be picked up by Japanese government entities — likely the Tokyo Metropolitan Government.

Tokyo organizers raised a record $3.3 billion from domestic sponsors, driven by giant Japanese advertising company Dentsu, Inc. But many sponsors complained openly in the runup to the Games that their investment was wasted without fans. Toyota, one of the IOC's top 15 sponsors, pulled its Games-related advertising off television in Japan because of public discontent about holding the Olympics in the middle of a pandemic.

The big winner appears to be the Switzerland-based International Olympic Committee, which by holding the Olympics — even without fans — assured broadcast rights income of $3 billion to $4 billion. The IOC is essentially a sports and entertainment business, and almost 75% of its income is from selling broadcast rights with another 18% from sponsors.

The IOC was able to drive the Games forward, partly because the terms in the so-called Host City Agreement favor the IOC and not the Japanese hosts.

In an interview last week, President Thomas Bach said financial interests were not at the center of the IOC's decision to postpone instead of cancel.

“We could have canceled the Games 15 months ago,” Bach said. "Financially, it would have been the easiest solution for the IOC. But we decided at the time not to cancel the Games, not to draw on the insurance we had at the time.”

The IOC has never said how much insurance coverage it has for such eventualities, nor what is covered.

So why did Tokyo want the Olympics? Why does any city? German sports economist Wolfgang Maennig said the Olympics offer little economic boost. So any value must be elsewhere. He has often likened the Olympics to throwing a big party for your friends and overspending, hoping they go away happy and remember you fondly.

“After three decades of empirical research, economists agree that the Olympics do not generate any significant positive effect on national (or even regional) income, employment, tax income, tourism etc.,” Maennig, a 1988 Olympic gold medalist in rowing, wrote in a email.

He said any benefits were elsewhere and include home-field advantage and more medals for home athletes, new sporting facilities, enhanced international awareness and fast-track decision making around urban regeneration. Japan's Olympic performance has been in line with that; it has won more gold medals and overall medals than ever before.

Much of the Olympic benefit goes to construction companies and contractors. Tokyo built eight new venues. The two most expensive were the National Stadium, which cost $1.43 billion, and the new aquatic center, priced at $520 million. The next two Olympic organizers — Paris in 2024 and Los Angeles in 2028 — say they are cutting back drastically on new construction.

Though Tokyo probably suffered short-term economic losses from the pandemic and absence of fans, any losses are relatively small for a country with a $5 trillion economy.

In another study of Olympic costs by Robert Baade and Victor Matheson, “Going for Gold: The Economics of the Olympics,” they point out that Olympic investment is risky and only a few reap the benefits.

“The goal should be that the costs of hosting are matched by benefits that are shared in a way to include ordinary citizens who fund the event through their tax dollars," they wrote. "In the current arrangement, it is often far easier for the athletes to achieve gold than it is for the hosts.”

AP Sports Writer Stephen Wade has been covering the runup to the Tokyo Olympics in Japan since 2018. Follow him on Twitter https://twitter.com/StephenWadeAP. AP Tokyo reporters Mari Yamaguchi and Yuri Kageyama contributed to this report. More AP Olympics: https://apnews.com/hub/2020-tokyo-olympics and https://twitter.com/AP_Sports.