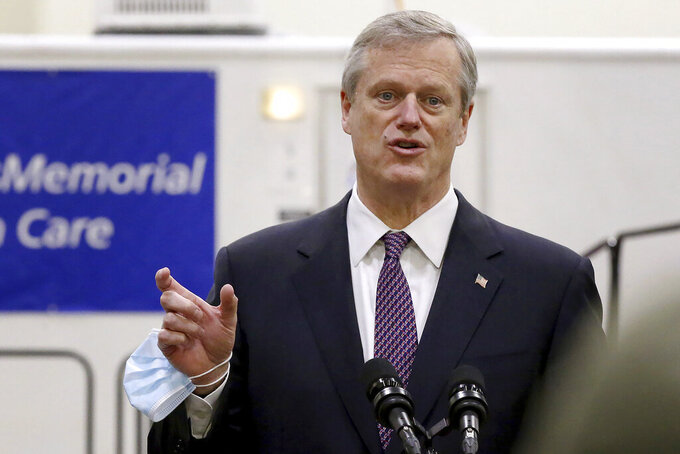 FILE - In this Dec. 3, 2020, file photo, Massachusetts Gov. Charlie Baker speaks after touring the DCU Center as it gears up to be used as a COVID-19 field hospital for the second time in Worcester, Mass. The Supreme Judicial Court ruled Thursday, Dec. 10, that Baker did not overstep his authority when he issued sweeping orders to close businesses to control the spread of the coronavirus. (Nancy Lane/The Boston Herald via AP, Pool, File)

BOSTON (AP) — Gov. Charlie Baker did not overstep his authority when he issued sweeping orders to close businesses and limit gatherings to control the spread of the coronavirus, the highest court in Massachusetts said in a ruling released Thursday.

The Supreme Judicial Court rejected a challenge brought on behalf of a group including salon owners, pastors and the headmaster of a private school, who accused the Republican governor of exercising "legislative police power” by declaring a state of emergency under the state’s Civil Defense Act.

The court said the pandemic clearly merits action by the governor under the Cold War-era law. It also rejected the lawsuit's argument that the governor's actions infringe on people's constitutional rights to due process and free assembly.

“Given that COVID-19 is a pandemic that has killed over a million people worldwide, it spreads from person to person, effective vaccines have not yet been distributed, there is no known cure, and a rise in cases threatens to overrun the Commonwealth’s hospital system, it is a natural cause for which action is needed," the court wrote, quoting the state law.

The governor declared a state of emergency March 10, giving him greater power to take actions like shutting down events with large gatherings of people or gaining access to buildings or stockpiling protective gear. He has issued a slew of emergency orders prohibiting gatherings of a certain size, closing certain businesses and mandating masks aimed at slowing the spread of the disease in the hard-hit state.

Facing mounting pressure in recent weeks from public health experts and municipal leaders to do more to control the dramatic increase in coronavirus cases that is stressing the health care system, Baker announced this week that Massachusetts would tighten some restrictions.

Beginning Sunday, indoor theaters and performance venues will again have to close, and stores, houses of worship, gyms, libraries, museums and other indoor spaces will have to reduce their capacity from 50% to 40%.

Yet restaurants, casinos and many other indoor venues will still be allowed to remain open, even as the state again opens field hospitals to help cope with rising numbers of COVID-19 patients.

The lawsuit filed in June by the Washington-based group New Civil Liberties Alliance argued that Baker had no authority to issue public health-related orders under the Civil Defense Act, which it said was designed to protect the state from foreign invasions, insurrections, and catastrophic events like hurricanes and fires.

The group argued the coronavirus falls under another state law, which it said puts local health boards instead of the governor primarily in charge of public health emergencies.

“Massachusetts has now shepherded the liberty-loving principles of the American Revolution from cradle to grave,″ the group said in a press release Thursday. “John Adams must be spinning in his tomb at the news that the colony that he and his fellow patriots fought so hard to liberate from arbitrary royal decrees, and establish as a republic grounded in a government of laws and the consent of the governed, has become what Adams feared most."

The new deaths pushed the state’s confirmed COVID-19 death toll to 10,963 and its confirmed caseload since the start of the pandemic to more than 264,400.

There were more than 1,600 people reported hospitalized Thursday because of confirmed cases of COVID-19, with more than 300 in intensive care units.

The average age of those hospitalized was 69.

The number of probable or confirmed COVID-19 deaths reported in long-term care facilities rose to 6,965.

Boston is bringing back its outdoor dining program in the spring, an initiative started this year to help restaurants survive during the coronavirus pandemic, Mayor Marty Walsh announced Thursday.

Online applications for the program scheduled to start April 1 — earlier if weather allows — are being accepted now, the mayor said in a statement.

Under the program, restaurants may be given permission to place outdoor seating on public property, including parking spaces and streets. The new program will include some new twists based on business and community feedback, he said.

“This year we saw the benefits outdoor dining can have on our neighborhoods: vibrant streets, support for local businesses, a safe and enjoyable experience for restaurant goers, and, in many ways, a lifeline for our small businesses during this challenging time,” Walsh said in a statement.

About 550 restaurants participated in this year's program.

In New Hampshire, the city of Nashua is considering a nightly curfew over concerns that a similar curfew and other restrictions in nearby Massachusetts will drive people north.

“We do need to do something to protect the vulnerable populations in our community,” Bobbie Bagley, director of Nashua Public Health and Community Services, said during a city health board meeting Wednesday, WMUR-TV reported. “Nashua is right on the border of Massachusetts and so, when things shut down in Massachusetts we do see an increase in activity in our state.”

But some restaurant and bar owners said that they have felt targeted by the restrictions and that closing early would not be fair.

“I think they are just going to go and hurt my employees and hurt people who are trying to make a living and we need that to happen. The economy is so important,” said James Rafferty from The River Casino and Sports Bar.