Top-ranked Clemson, No. 7 Miami face off in ACC showdown 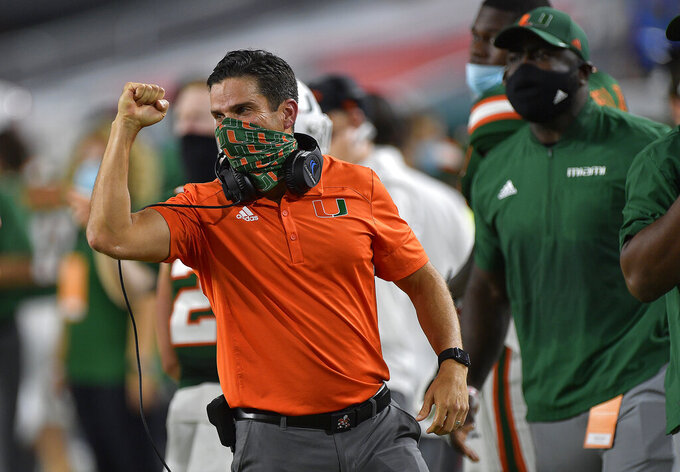 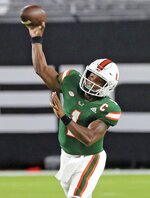 Miami coach Manny Diaz wants big games like the Hurricanes-Clemson matchup to be much more commonplace.

The seventh-ranked Hurricanes (3-0, 2-0 Atlantic Coast Conference) can take a step in bringing back the dominance of “The U” when they play the No. 1 Tigers (3-0, 2-0) on Saturday night.

The game is the 17th top-10 matchup in ACC history — and Clemson's been in four of the past five. Miami's only appearance the previous six years was in a 38-3 loss to the Tigers in the 2017 ACC championship game.

Diaz believes Miami needs more and more big-game, prime-time matchups that all college football is talking about to return the program to national prominence. Clemson's consistency the past few years (five straight ACC titles and five consecutive trips to the College Football Playoffs) comes from playing and winning such games, a history Diaz knows the Tigers will draw on this week.

“This is not a big game to Clemson,” Diaz said. “This is what they do. We've got to get our program the same way.”

It also doesn't hurt to have dynamic playmakers on offense.

Hurricanes tailback Cam'Ron Harris is third in conference rushing with 311 yards and leads the ACC with five rushing touchdowns.

The Hurricanes will need both at the top of their games to keep up with Clemson's Heisman Trophy candidate duo of quarterback Trevor Lawrence and running back Travis Etienne.

Lawrence has hit almost 74% of his passes for 848 yards and seven touchdowns. Etienne, the two-time defending ACC player of the year, has rushed for 243 yards and two touchdowns. He's also been critical as a pass catcher — he had five receptions for a career-best 114 yards — and the return game.

Clemson coach Dabo Swinney said his team's sustained success is treating each week as a big-time, prime-time showdown so his team will prepare as they have no matter who the opponent is. Still, he believes the Tigers haven't had a bigger test than the Hurricanes this year.

“They have dudes everywhere and that’s pretty easy to see,” Swinney said.

Some other things to watch when No. 7 Miami plays No. 1 Clemson:

Clemson quarterback Trevor Lawrence has not thrown an interception in his last 314 passes dating back 11 games. Lawrence made it a priority in the offseason to better protect the ball after throwing a career-high eight interceptions last season. Lawrence is chasing ACC leader in Russell Wilson, who went 379 passes between picks while at North Carolina State in 2008-09.

Miami has gotten to flash its latest “Turnover Chain” several times this year and hopes it can do some more at Death Valley. The 2020 version of the chain features the school logo inside an outline of the state of Florida. Since first unveiling the chain in 2017, the Hurricanes are tied with Wisconsin with 76 takeaways in the previous three seasons. Miami has four interceptions and two fumble recoveries this season.

Clemson has certain had its way — and had an impact on the program — with Miami the last two meetings. Clemson had a 58-0 win at Miami in 2015 and shortly after, the Hurricanes parted ways with then-coach Al Golden. Miami's new coach Mark Richt led the team to its first ACC title game two years later where the Tigers routed them 38-3.

Clemson has become known in recent years for its raucous atmosphere at Death Valley, especially in showdown games at night. But due to coronavirus restrictions, Clemson cannot have more than 19,000 people inside its 81,500-seat stadium. Tigers coach Dabo Swinney said he can't worry about things out of his control. He said those fans who show up will give it all they've got.

Miami has won nine of 14 games against the No. 1 team in the country, its last win, however coming over Florida State in 2000. It's last victory on the road against a No. 1 opponent was nine years earlier and also against Florida State, a 17-16 win where Gerry Thomas missed a field goal at the end that has become known as “Wide Right I."