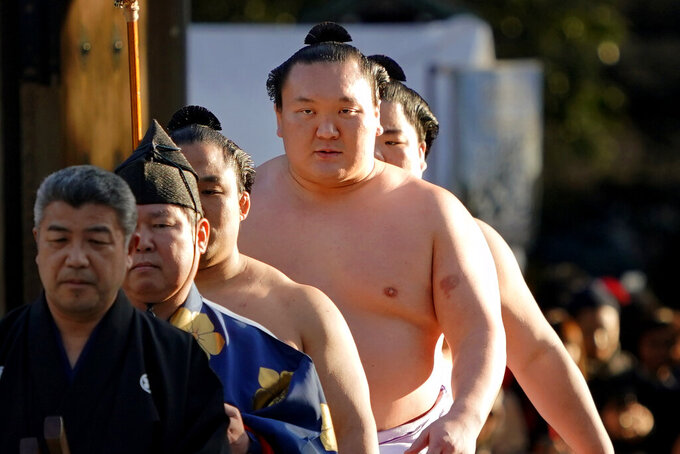 FILE - In this Jan. 9, 2018, file photo, Sumo grand champion Hakuho, second from right, of Mongolia arrives to perform his ring entry form at the Meiji Shrine in Tokyo. Hakuho, the top-ranked sumo wrestler in Japan has tested positive for the coronavirus, the Japan Sumo Association said on Tuesday, Jan. 5, 2021.(AP Photo/Shizuo Kambayashi, File)

Hakuho took a COVID-19 test after losing his sense of smell, the Japan Sumo Association said on Tuesday.

The 35-year-old Mongolian-born rikishi was preparing for the New Year Grand Tournament starting on Sunday in Tokyo.

The JSA did not elaborate on Hakuho's condition, and did not say whether the tournament will be postponed.

Hakuho has won a record 44 championships, and is the longest serving yokozuna (grand champion), since he earned the promotion in 2007. He reportedly plans to retire after the Tokyo Olympics.

New virus cases have been surging in Japan for several weeks, and Prime Minister Yoshihide Suga has been asked to impose a state of emergency for Tokyo and three neighboring prefectures.