A tough year for all, a memorable year for Stewart Cink 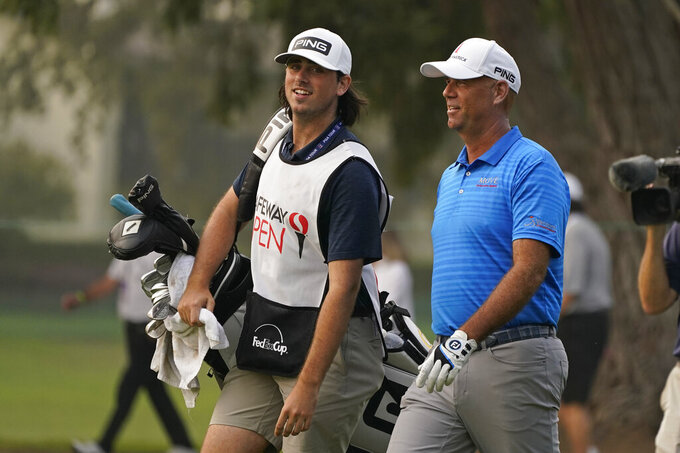 FILE - Stewart Cink, right, walks with his caddie and son, Reagan Cink, down the 18th fairway of the Silverado Resort North Course during the final round of the Safeway Open PGA golf tournament in Napa, Calif., in this Sunday, Sept. 13, 2020, file photo. Cink revealed Wednesday, Nov. 18, he and his wife had the coronavirus in March and didn't realize it until antibody tests were positive in June. (AP Photo/Eric Risberg, File)

ST. SIMONS ISLAND, Ga. (AP) — Stewart Cink hesitates to cherish so many great moments for him this year while so many have suffered.

His oldest son, Reagan, began caddying for him and they shared a great father-son memory in September when Cink won the Safeway Open, his first PGA Tour victory since his British Open title over Tom Watson at Turnberry in 2009.

At age 47, he now has full status until he is old enough for the PGA Tour Champions. He is back in the Masters. Both his sons got engaged, and Reagan has decided to spend more time with him as a caddie.

“When I think back to 2020, I’m going to have probably a little bit better feelings about it than most of the rest of the world’s population because 2020 hasn’t been that kind to many of us,” Cink said Wednesday at the RSM Classic. “But there's definitely been some bright spots.”

He hasn't exactly been in a bubble. Cink also revealed that one of those bright spots was his wife, Lisa, who is coping with Stage 4 breast cancer, got through a bout with COVID-19.

In fact, Cink had the coronavirus, too.

“We went through COVID in the very beginning, before there was testing available, before we knew that much about it,” Cink said. “We didn't know we had COVID until about two months later when we both got the antibody test and we both had it. And then we both got re-tested and it was confirmed multiple times.”

The blessing there was that Lisa Cink, diagnosed with breast cancer four years ago, was in remission and handled COVID-19 without incident.

“Lisa had it moderate to pretty serious, not hospitalization or anything, but just pretty significant symptoms, very flu-like,” Cink said. “I had almost nothing. I had just about a half-day where I felt a little bit sore in my back and my shoulders, and that's it.”

Cink said his wife had symptoms the week of The Players Championship, which was canceled after one round as the pandemic shut down sports around the country. His case was a week later.

“I went skiing with my son. He asked me to come out with his college friends to go skiing, which I was like, I’m not missing that,” Cink said. “So when I came back from that flight, I flew round-trip from Atlanta to Utah, I came back and I was sick. So I feel certain that I was probably spreading it on the flight, this is before masks or anything. Looking back, I would have loved to change that, but we didn’t know much.”

The PGA Tour ended up taking a three-month break. Cink received the positive antibody test a week before golf resumed its schedule.

Indeed, this has been a year to remember. His son, who graduated with a degree in engineering from Georgia Tech, was preparing to return to work with Delta Airlines when Cink tied for fourth in the Bermuda Championship. It was during a family chat that night that plans changed.

“We all sat around and said, ‘Hey, this has been really fun. You’re supposed to go back to work next week, but maybe this is the right time for you to push work back for a year. I like you caddying and I think you’re having a good time and you’re good at it.’ And it's so nice to spend time with our son.”

Cink said his son worked out an arrangement to return to work after he gets married in July. In the meantime, he'll stay on the bag for his dad.

The RSM Classic starts Thursday at Sea Island Golf Club on the Golden Isles about 30 miles north of the Florida state line, and it has its strongest field ever. Webb Simpson at No. 6 is the highest-ranked player. The field includes 40 players who were at the Masters, including runner-up Sungjae Im.

Lee Westwood asked for a sponsor exemption, one of 11 Europeans in the field who have played in the Ryder Cup.